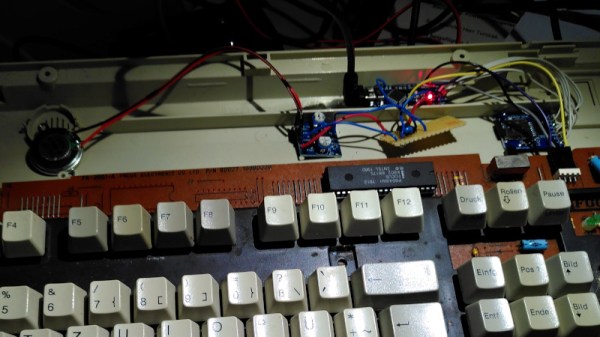 Just as cats find sitting on a keyboard to be irresistible, so do children find pressing their keys. After throwing some ideas around with other parents, [Peter] came up with the idea of transforming an old AT  keyboard into a learning toy by making each key press “speak” its corresponding letter.

The donor keyboard is a nondescript late-80s AT compatible PC. Before readers imagine that a sought-after mechanical ‘board is being defiled, these were manufactured in their millions back then with exactly the same lackluster actions as modern cheap input devices. This one had plenty of space inside for an Arduino Nano that emulates an AT keyboard host and plays WAV file samples from an SD card to one of its PWM outputs. An op-amp low pass filter cleans up the noise from this rudimentary DAC, and feeds a little speaker through an audio amplifier. The keyboard supports both male and female voices, as well as a piano.

Hours of juvenile fun will no doubt result, but we can’t help wondering whether this could become the bane of a parent’s life in the manner of so many other noise-producing toys. Meanwhile, [Peter]’s work has graced these pages in the past, most recently with an automatic cooker hood.

Last week we introduced a new version of the Bus Pirate universal serial interface tool. The last firmware update included an AT keyboard decoder library for both hardware versions.

There’s a ton of old AT keyboards making their way to the landfill. We’ll show you how to recycle one as an input device for your next project.