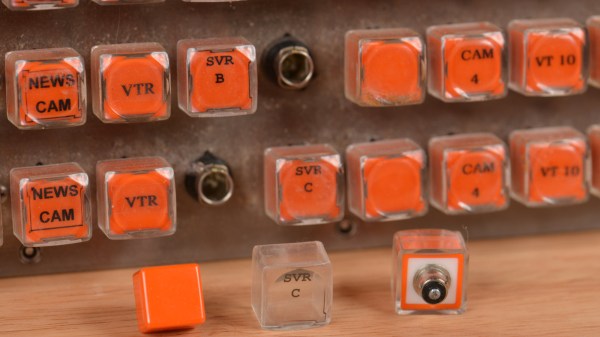 Video effects and mixing are done digitally today, but it wasn’t always so. When analog ruled the video world, a big switch panel was key to effective results.

Devices like [Glen]’s Grass Valley Series 300 Crosspoint Switch Panel were an important part of that world. With tools like that, a human operator could set up a composited preview feed in true WYSIWYG style, and switch to live on cue. All done with relatively simple CMOS ICs and buttons. Lots and lots of buttons.

[Glen] reverse engineers the panel to show how it works, and most of the heavy lifting is done by the MC14051B analog multiplexer/demultiplexer, and the MC14532B 8-bit priority encoder. Once that’s figured out, the door is open to modernizing things a little by using a microcontroller to drive the device, turning it into a USB peripheral.

With a little design work, [Glen] builds a PCB around the EFM8UB2 8-bit microcontroller to act as a USB peripheral and control the switch panel, taking care of things like key scanning and lamp control. The last step: a GUI application for monitoring and controlling the panel over USB.

This isn’t [Glen]’s first time interfacing to vintage video mixing and switching, and as many of us know it’s sometimes tricky work to interface to existing hardware. We covered his earlier video switcher project using hardware that was not nearly as easy to work with as this one.

Last week we introduced a new version of the Bus Pirate universal serial interface tool. The last firmware update included an AT keyboard decoder library for both hardware versions.

There’s a ton of old AT keyboards making their way to the landfill. We’ll show you how to recycle one as an input device for your next project.

END_OF_DOCUMENT_TOKEN_TO_BE_REPLACED

Sensirion’s SHTxx is a digitally interfaced humidity and temperature sensor. Accurate humidity measurements usually require careful analog design, but the SHTxx moves all that complicated stuff into a single chip. Through-hole (SHT7x) and surface mount (SHT1x) versions are available, we used the surface mount SHT11 with +/-3% accuracy. We’ll show you how to use the SHTxx below.

END_OF_DOCUMENT_TOKEN_TO_BE_REPLACED

The Maxim DS2431 1K EEPROM is 1-Wire device that adds storage to a project using a single microcontroller pin. We previously interfaced a 1-wire thermometer, but this EEPROM is slightly different because it draws power directly from the 1-Wire bus. Grab the datasheet (PDF) and follow along while we read and write this simple 1-Wire memory.

END_OF_DOCUMENT_TOKEN_TO_BE_REPLACED

The DS1077 is a 5volt, 133MHz to 16kHz programmable clock source. The internal frequency divider is configured over a simple I2C interface, and the chip requires no external parts. Not bad for under $2. We used the Bus Pirate to test this chip before using it in a project. Grab the datasheet (PDF) and follow along. END_OF_DOCUMENT_TOKEN_TO_BE_REPLACED