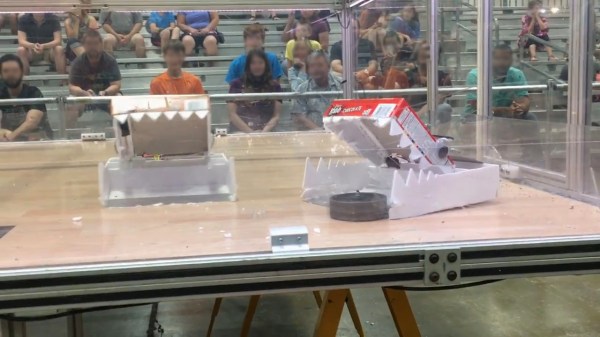 The battle’s are done and the results are in — [AltaPowderDog]’s, aka [Carter Hurd],  cardboard and foam armor, lightweight Krave robot beat its metal cousins in 2016 and fared well in 2017. How did a cardboard Krave cereal box and foam board robot do that you ask? The cardboard and foam outer structure was sliced, smashed and generally eaten while the delicate electronics, motors and wheels remained buried safely inside.

We covered the making of his 2016 version but didn’t follow-up with how it fared in that year’s Illinois Bot Brawl competition. As you can see in the exciting first video below, despite suffering repeated severe damage to its armor, it won first place in the 1 lb Antweight category!

For 2017 he made another one but managed to halve the weight — and so he made two of them! By starting them both within a twelve-inch by twelve-inch area, they were allowed to fight as a team. How did he make it lighter? Partly it was done by doing away with the ability to lift the metal lip in front, the wheels were reduced from four to two, and a smaller servo was used for opening and closing the mouth. The full build video is shown below along with a video of the 2017 battles wherein he won seventh place.

END_OF_DOCUMENT_TOKEN_TO_BE_REPLACED

The idea of purpose is one of great importance to many sentient beings; one can only imagine the philosophical terror experienced by a robot designed solely to pass butter. Perhaps wishing to create a robot with more reason to exist, [Micah “Chewy” Leibowitz] decided to build this battlebot armed with a flamethrower, named Flamewar.

In the video, we see it rather successfully facing off against a robot named T800, at least in the early part of the fight. T800 is armed with a spinning weapon, and while it is able to deliver a heavy thump thanks to stored kinetic energy, more often than not T800 seems to knock itself over rather than do any serious damage to Flamewar. Flamewar is repeatedly able to fire its primary weapon, as the flamethrower is built into its arms, far above the reach of T800’s armament. We won’t spoil the ending of the fight. Video below the break.

The robot was built by [Micah] who competes with [Team Tiki], who have documented some of their past builds online. We would like to see some footage of Flamewar actually passing some butter, though. The bout was a part of Robogames 2017, and we’re impressed that such things like flamethrowers are allowed in the rules. Obviously safety is a paramount concern of these events, so it’s awesome to see they’ve found a way to make things work.

If you’re unaware of the dairy product reference, fill yourself in here. We’ve seen other takes on this, too.

We love seeing combat robots here at Hackaday. If you’re thinking about getting started yourself, why not get started with an ant-weight bot to cut your teeth?

END_OF_DOCUMENT_TOKEN_TO_BE_REPLACED

It’s that time of year again. The nights are getting longer and the leaves are turning. The crisp fall air makes one’s thoughts turn to BattleBots: pumpkin-skinned BattleBots.

If you’re asking yourself, “could a laser-cut plywood bot, sheathed in a pumpkin, stand up against an all-metal monster”, you haven’t seen BattleBots before. Besides the hilarious footage (see video embedded below), a lot of the build is documented, from making a CAD model of a pumpkin to laser-cutting the frame, to “testing” the bot just minutes before the competition. (That has to be a good idea!)

The footage of the pumpkinbot’s rival, Chomp, is equally cool. We love that the hammer weapon is accelerated so quickly that Chomp actually lifts in the air, just as Newton would have predicted. We’re not sure if the fire weapon is good for anything but show, and facing plywood pumpkinbots, but we love the effect.

END_OF_DOCUMENT_TOKEN_TO_BE_REPLACED END_OF_DOCUMENT_TOKEN_TO_BE_REPLACED

The fifth annual RoboGames is happening this weekend in San Francisco. RoboGames is a broad reaching competition designed to bring together specialists in all areas of robotics. Last year’s event had 800 entries in 62 different events. The biggest audience draw is definitely the combat robots shown in the video above, but there are other skill and task based competitions. If you’re in the area, this is definitely worth your time. Check out ROBOT magazine’s coverage from last year to get an idea of what you’ll see (or in our case miss).