When we published a piece about an ADS-B antenna using a Coke can as a groundplane, Hackaday reader [2ftg] got in contact with us about something with a bit more… stature.

A monopole groundplane antenna is a single vertical conductor mounted on an insulator and rising up above a conductive groundplane. In radio terms the groundplane is supposed to look as something of a mirror, to provide a reflection of what would come from the other half of a dipole were there to be two conductors. You can use anything conductive as your monopole, a piece of wire, (in radio amateur humour) a piece of wet string, or even beer cans. “Beer cans?” you ask incredulously, expecting this to be another joke. Yes, beer cans, and [2ftg] has been good enough to supply us with a few examples. The first is a 57-foot stack of them welded together in the 1950s for use on the 80 metre band ( we suspect steel cans may have been more common than aluminum back then), the second is a more modest erection for the 2 metre band, and the final one consists of photographs only of an HF version that looks a little wavy and whose cans are a little less beery.

The reporting in the 1950s piece is rather cheesy, but does give a reasonable description of it requiring welding rods as reinforcement. It also gives evidence of the antenna’s effectiveness, showing that it could work the world. Hardly surprising, given that a decent monopole is a decent monopole no matter how many pints of ale you have dispatched in its making.

The Coke can ADSB can be seen in all its glory here, and if all this amateur radio business sounds interesting, here’s an introduction.

He’s back, [Bill Hammack] aka The Engineer Guy. He has a habit of revealing how the ordinary is extraordinary with a meticulous unveiling of all the engineering that goes into a thing. This time around it’s the aluminum beverage can. You might know it as a soda can, a beer can, or a salt-free air can. But we challenge you find someone who isn’t intimately familiar with these containers.

We know what you’re thinking: you already saw how these come into being on an episode of How It’s Made. You’re wrong. We saw that episode too. But just give [Bill] a few minutes of your time and he’ll suck you in for the rest of the episode. Now the die-forming of the base and side-wall, we’ll give it to you that you know what that’s all about. But then [Bill] busts into the history of these containers, citing the aluminum savings through reducing the top diameter of the can. He rounds it out with a celebration of the ingenuity of the modern “stay-on” tab which should make your glasses fall off with excitement.

If this is your first time hearing of The Engineer Guy you have a delightful weekend ahead of you. Binge watch his entire back cataolog! Our favorites include an analysis of a mechanical Fourier computer and the concepts involved in color anodization. We even read his book.

END_OF_DOCUMENT_TOKEN_TO_BE_REPLACED What do you do if you’ve got a fully equipped machine shop and you’re tired of taking old beer cans to the recycler? If you’re like [Brock], you’ll probably end up melting those cans down to build an engine.

After gathering 50 pounds of beer cans and melting them down into ingots of various sizes, [Brock] and company had a lot of aluminum and nothing to build. Eventually, someone got the idea to build an internal combustion engine out of these beer can ingots.

So far, the beer can engine crew has built two engines from these beer can ingots. The four-stroke engine started off as a 5-inch aluminum cube, bored and milled into something resembling an engine block. When [Brock] and the beer can engine team completed their four-stroke masterpiece, they had a water-cooled engine displacing 150cc with a single 2″ bore piston. The two-stroke engine is a much simpler affair with a 1 inch bore displacing 19cc.

Even though there’s no information at all covering the pottery kiln foundry used to melt the beer cans into ingots, it’s an amazing piece of work building and engine from the ground up.

You can check out a few videos of both engines after the break.

END_OF_DOCUMENT_TOKEN_TO_BE_REPLACED 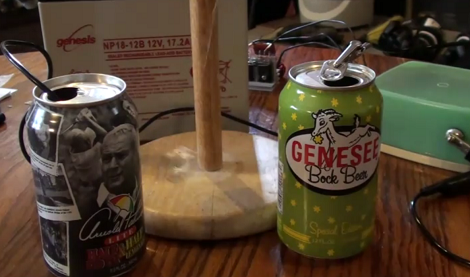 It looks like we now have another way to annoy ourselves with extremely high voltage.

The bells operate under the same principles as the electrostatic see-saw we covered last month. A voltage is applied to one can while the other can is grounded. An insulated pendulum is placed between each can, and with a little coaxing can be made to oscillate back and forth between the cans. As the pendulum touches the charged can, it is repelled as it gains the charge and moves to the grounded can. There, the charge is released and the cycle continues again. A homemade Cockcroft Walton multiplier is used to generate the +35kV needed to get the pendulum moving.

[Ben Franklin] invented the Franklin Bells while he was investigating electricity in the 1750s. Originally an extension of the kite & key experiment, the bells were historically used to warn of approaching thunderstorms – when the bells rang, the atmosphere was charged and lightning could strike. Even though the voltage between the bells is huge, very little current is drawn – the Oxford Electric Bells have been ringing since 1840 using the same electrostatic battery.