Creating 3D prints is great, but sometimes you need something more durable. [Myfordboy] printed a new 3D printer extruder in PLA and then used the lost PLA method to cast it in aluminum. You can see the results in the video below.

The same process has been used for many years with wax instead of PLA. The idea is to produce a model of what you want to make and surround it with a material called investment. Once the investment sets, heat melts the PLA (or wax) leaving a mold made of the investment material. Once you have the mold, you can place it in a frame and surround it with greensand. Another frame gets a half pipe placed and packed with greensand. The depression made by this pipe will provide a path for the metal to flow into the original mold. Another pipe will cut a feeder into the greensand over this pipe.

END_OF_DOCUMENT_TOKEN_TO_BE_REPLACED

[Anders] is going to beat the land speed record for a turbine-powered motorcycle. It’s a project he’s been working on for years now, and just this week, he put the finishing touches on the latest part of the build. He successfully cast the compressor for a gas turbine engine that’s twice as powerful as the one he has now.

This compressor piece was first 3D printed, and this print was used as a positive for a sand – or more specifically petrobond – mold. The material used in the casting is aluminum, fluxed and degassed, and with a relatively simple process, [Anders] came away with a very nice looking cast that only needs a little bit of milling, lathing, and welding to complete the part.

In the interests of accuracy, and just to make sure there’s no confusion, this ‘jet’ engine is actually a gas turbine, of which there are many configurations and uses. The proper nomenclature for this engine is a ‘turboshaft’ because the power is directed to a shaft which drives something else. This is not a new build; we’ve been covering [Anders]’ build for the better part of two years now, and although [Anders] intends to break the world record at the Bonneville salt flats eventually, he won’t be beating the ultimate land speed record – that title goes to a car – and he won’t be beating the speed record for all motorcycles. Instead, [Anders] plans to break the record for experimental propulsion motorcycles, or motorcycles powered by electric motors, steam, jet engines, or in this case, ‘turboshafts’.

It should also be noted that [Anders] frequently does not wear hearing or eye protection when testing his gas turbine engine. That is an exceedingly bad idea, and something that should not be attempted by anyone.

As an additional note for safety, in the video below of [Anders] pouring aluminum into his mold, the ground looks wet. This is terrifically dangerous, and steam explosions can kill and maim even innocent bystanders. This is not something that should be attempted by anyone, but we do thank [Anders] for sharing his project with us.

END_OF_DOCUMENT_TOKEN_TO_BE_REPLACED 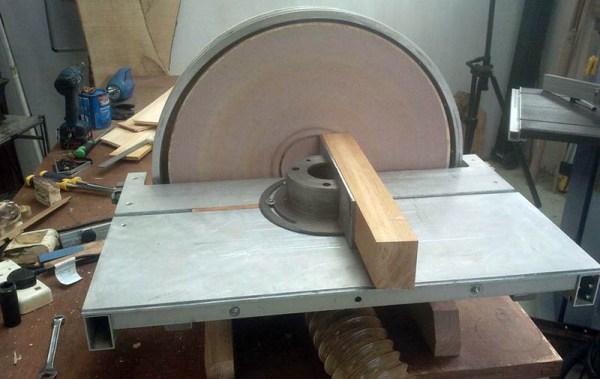 A small disk sander is a useful and cheap addition to the shop. For about $100, you can buy a cheap combination 6″ disk/belt sander that’s extremely useful. The size and cost of power tools does not scale linearly, and if you want a big disk sander you might as well make your own.

The motor for this build is a 1kW single phase motor pulled from a floor polisher found in the trash. That’s enough to push a sanding disk around, but when you get to tools this large, you need a good base, good tilt mechanism, and everything should be extremely heavy.

This build meets all those requirements while still using mostly recycled components. The work table is actually made of three pieces of recycled aluminum epoxied together. Yes, you should cringe at this, but it actually makes a little bit of sense: thinner pieces can be cut on a table saw, and if you’re extremely careful during the glue-up, you can cut the mitre slot without a mill. This frame attaches to a frame made from aluminum extrusion and filled with a homebrew epoxy granite mix. Remember, heavy is better here.

In keeping with making a huge disk sander out of stuff pulled out of the trash, the trunnions and motor hub were cast out of aluminum melted in an old propane tank furnace. Once these were cleaned up, a disk was mounted on the hub and trued up in the most unsafe manner possible.

With a few additions including a machined mitre gauge, dust collector, and legs made out of wood that’s far too pretty for a simple shop tool, this huge assemblage of trash turned out to be a great sander. You can see a few videos of it below.

END_OF_DOCUMENT_TOKEN_TO_BE_REPLACED 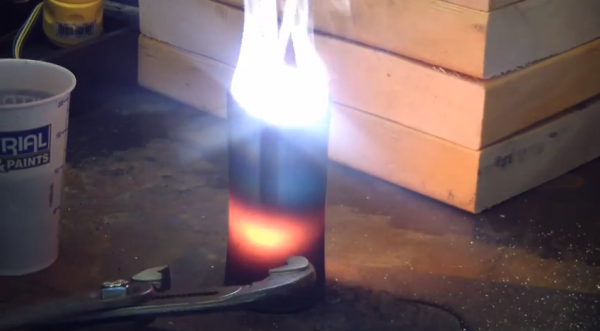 That kinetic sand stuff is pretty cool. It’s soft, it builds motor skills, and outside of sprinkling it on carpet, it’s not messy. If you don’t know, it’s 98% sand and 2% polydimethylsiloxane, which is a major component of Silly Putty, and according to a certain yellow and red clown, it’s safe enough to put in chicken nuggets. [Chris]’s wife bought him some, probably because she wanted to see him play around with something that isn’t potentially deadly for a change. In the course of researching its magical properties, he found out that it doesn’t really have a thermal breakdown point, per se. At high enough temperatures, It vitrifies like a sand castle in a mushroom cloud. Between this property and its malleability, [Chris] thought he’d have a reasonable substitute for founding sand. As you can see in his latest experiment, he was right. As a bonus, he managed to turn the benign into the dangerous.

[Chris] had never cast aluminium before, so he decided to start small by making an offset cam for a rotary broach. He packed some magic sand in a wax paper cup and shoved the cam in to make the negative. Then he cut down some aluminium rod and put it in a graphite crucible. He stuck his DC arc welder’s electrode down into the crucible and cranked it up to 50A. That wasn’t enough, so he went to 110. The crucible was soon glowing orange. He carefully poured the molten aluminium into the mold. Make the jump to see how it panned out.

END_OF_DOCUMENT_TOKEN_TO_BE_REPLACED This DIY electric coffeemaker prototype uses an assemblage of 3D-printed parts and cast aluminium. [siemenc]’s main goal with this project was to utilize and demonstrate recycling and re-usability. He used Filabot filament exclusively and melted down scrap aluminium such as cans, foil, and CNC mill waste in an oven he fashioned from an old fire extinguisher. He also cast the aluminium parts himself from 3D-printed positives.

Of course, he had to buy the things that make this a coffeemaker such as the hoses, the fuse, and the heating element. If you’re wondering why he didn’t salvage these parts from yard sale machinery, it’s because he wanted to be able to replace any part of it and have it last as long as he needs it to last. The innards he used are not specific to any model, so he should be able to easily find a replacement.

Just like a pour over set up, [siemenc] has fine control over the strength and quantity of the brew. We particularly like this machine’s exotic bird looks as well; it may be a prototype, but it’s quite stylish. If you’re looking to go all the way with DIY coffee, why not grow your own beans and then roast the beans yourself? Turning 3D printed plastic parts into metal objects is not a new concept. But we don’t see a lot of it and enjoyed watching the documentary version of [3DTOPO’s] lost PLA metal casting process so much we figured you’d want to see it too.

The thirty-five minute video walks through every part of the process which we originally learned about in September of last year. The process was developed as a way to fabricate parts that will be used in high-stress applications. For instance, the part seen above is a mounting bracket for the ball screws that moves the Z axis on a huge CNC build he’s been working on. A plastic part will break under the strain so he needed to make it out of aluminum alloy.

To start, the piece is modeled and printed in plastic to check the fit. Once it’s just right he scales it to 103% and prints it again to account for the shrinking of the metal as it cools. The next step is pictured above, adding paths using rigid foam insulation that allow for the metal pour and for air to escape. This is packed into a plaster and sand mold which dries before being cooked in a furnace to vaporize the foam and PLA. This leaves a perfect mold for the metal pour.

After the break you can see a 5-minute overview version of the project.