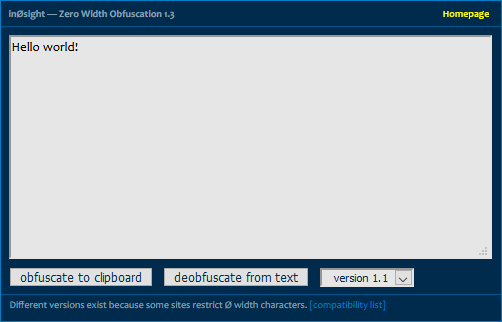 Some sentences have more than meets the eye, and we’re not talking about interpretive nonsense. Rather, some sentences may contain up to four paragraphs’ worth of hidden text, invisible to readers.

Thanks to Zero Width Obfuscation, it is possible to use Zero Width Characters – Unicode characters that are invisible even when you try to highlight them. They’re typically used for abstract foreign languages that require separators that don’t take up an entire space. In this case, they’re used to obfuscate and de-obfuscate hidden messages sent through text.

[inzerosight] published a browser extension that identifies, de-obfuscates, and obfuscates these messages for you on the web. It does this by querying each page for the Unicode of the Zero Width Characters (U+FEFF, U+200C, U+200D, U+200E, U+2060, U+180E) and highlighting where they’ve been spotted. The encoding replaces each Unicode character with a permutation of two of the Zero Width Characters, essentially doing a find and replace across the text message.

I’m just waiting to see how long it takes for Zero Width Obfuscation to become the next Konami Code Easter Egg.

If you are browsing GitHub it is very tempting to open up the source code to some project and peek at how it works. The code view is easy to read, but the viewer lacks one important feature: the ability to click on an included file and find it. The Octolinker extension fixes that oversight.

If you want to try it without installing the extension, there is a mock-up demo available. Even though the demo wants you to click on specific things, if you don’t play by the rules it will still do the right thing and take you to either the code on GitHub or an appropriate page. You can even substitute the demo URL for github.com and try it out on any GitHub page without the extension.