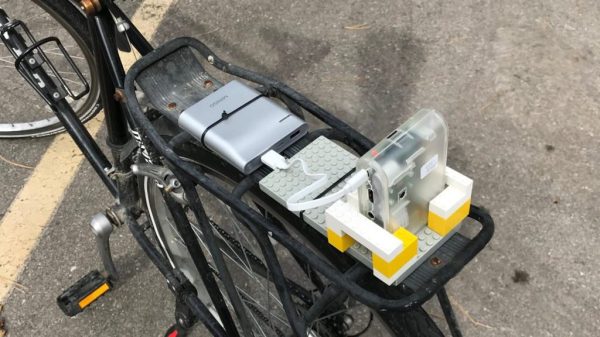 Riding a bicycle is a wonderful and healthy way to get around. However, just like with any other vehicle on the road, it can be useful to have a camera to record what goes on in traffic. [Richard Audette] built just such a rig.

The original setup relies on a Raspberry Pi 3, which takes a photo every 10 seconds using the attached Pi Camera. It then processes these photos using OpenALPR, which is a piece of software for reading licence plates. Licence plates detected while cycling can be stored on the Raspberry Pi for later, something which could be useful in the event of an accident.

However, [Richard] has developed the concept further since then. The revised dashcam adds blind spot detection for added safety, and uses a Luxonis OAK-D camera which provides stereo depth data and has AI acceleration onboard. It’s paired with a laptop carried in a backpack instead of a Raspberry Pi, and can stream video to a smartphone sitting on the handlebars as a sort of rear-view mirror.

Anyone who has commuted on a bicycle will instantly see the value in work like [Richard]’s. Just avoiding one accident from a car coming from behind would be of huge value, and we’re almost surprised we don’t see more bicycle rear view kits in the wild.

Alternatively, if you just want to scan your surroundings as you ride, consider building a landscape scanner instead. Video after the break.

END_OF_DOCUMENT_TOKEN_TO_BE_REPLACED