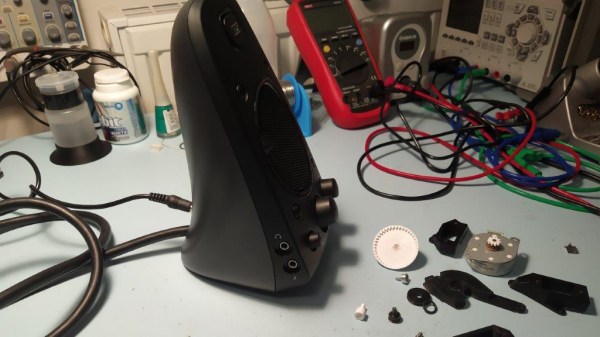 [Haris Andrianakis] likes his Logitech Z623 sound system. He likes it a lot. Which is why he was willing to hack in his own remote volume control rather than just get a new pair of speakers. But he certainly didn’t make things easy on himself. Rather than trying to tap into the electronics, he decided to take the long way around and motorize the volume knob.

The idea seemed simple enough. Just drill a hole through the PCB behind the knob’s potentiometer, attach some kind of extension to the axle, and turn it with a small servo. Modifying the PCB and potentiometer went well enough, but the trouble came when [Haris] actually tried to turn the thing.

Attaching the servo directly to the axle worked, but it made turning the knob by hand extremely difficult. His next idea was to add a small belt into the mix so there would be some slip in the system. But after designing a 3D printed servo mount and turning custom pulleys on the lathe, it ended up having too much slip, and the knob didn’t always move when the servo turned.

He then swapped out the servo for a small stepper motor. The motor was easy enough to spin when powered down, but didn’t have quite enough torque to turn the knob. He tried with a larger stepper motor that he salvaged from an old printer, but since he could only run it at half the recommended 24 VDC, it too had a tendency to skip steps. 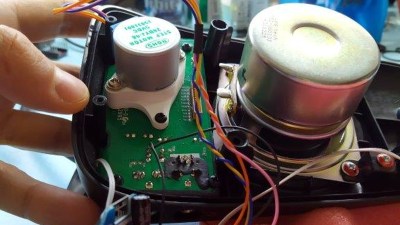 After experimenting with some 3D printed reduction gears, [Haris] finally stumbled upon the 28BYJ-48. This small stepper with an integrated gearbox proved to be the perfect solution, as it had enough muscle to turn the knob while at the same time not restricting its movement when powered down. The rest of the project was relatively easy; with a DRV8825, an ESP8266, and an IR receiver, he’s able to spin the stepper with his TV’s remote. A simple web page running on the ESP8266 even allows him to control volume over the network with his smartphone. Based on similar projects we’ve seen, he could probably add support for HDMI CEC as well.

[Haris] says you shouldn’t follow his example, but we’re not so sure. He kept going when others would have given up, and the engineering and thought that went into each attempt is certainly commendable. Even if he hadn’t ultimately gotten this project working, we’d still say it was a valiant hack worthy of praise.

END_OF_DOCUMENT_TOKEN_TO_BE_REPLACED 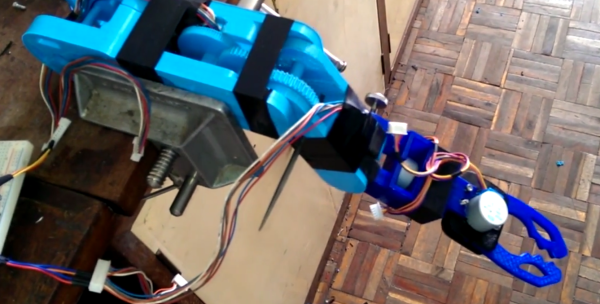 It’s mind boggling how much e-waste we throw out. Perfectly good components, mass produced for pennies. And at the end of their life, going straight to a landfill or some poor country to be melted down. Don’t you wish you could help?

Stepper motors are a dime a dozen when it comes to e-waste, and there’s tons of cool projects you can do with a stepper motor — [Madivak] is just starting on a robot arm design over at Hackaday.io that makes use of recycled components.

It’s fairly early in development, but that means it’s a great time to start following it on the project site. The robotic arm is being designed for his final year project in his undergrad degree. Besides the steppers, he’s using his school’s Utilimaker 3D printer to manufacture all of the other mechanical components with control coming from DRV8825 stepper drivers and the Freescale Freedom KL25Z dev kit. Check out the clips after the break to see current state of the build.