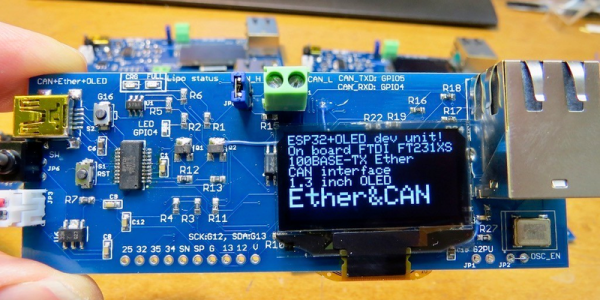 Prolific hacker [kodera2t] is working on his own “ESP32 monster board” dev board for the still-newish ESP32 WiFi module. His board has everything: Ethernet, OLED, LiPo, and even CAN-bus. But all that peripheral connectivity is worth nothing if you can’t program the microcontroller to use it.

The Arduino environment for the ESP32 is coming along quite nicely, but it’s not yet fully featured enough to run all of [kodera2t]’s hardware. To take advantage of all that, he needs to use Espressif’s SDK — called the “IoT Development Framework” or IDF for short. In his latest project log, [kodera2t] goes through everything necessary to get the IDF up and compiling on OSX. (It’s strangely similar to the Linux procedure.) Read through the official instructions here, if you want more, but we think [kodera2t] hits all the high points.

While we’re tooting [kodera2t]’s horn, check out his old project — an Arduino shoehorned into an SD card — or watch his alter-ego [Toshiro Kodera] give a serious talk about his day job, engineering radio-frequency meta-materials.