Across the Northern Hemisphere it is now summer and the growing season is in full swing. Vigorous plants that will soon bear tasty fruit are springing forth from the soil, but unfortunately so are a lush carpet of weeds that require the constant attention of the gardener. “If only there were a machine that could take that on!” she cries, and as it happens she’s in luck.

The FarmBot is an open-source robotic vegetable grower able to take care of all aspects of sowing and tending a vegetable plot. We first saw them five years as a semifinalist in the first Hackaday Prize. This is a CNC machine for the raised beds of your backyard garden. Give it power, water, and a WiFi connection, and FarmBot goes into service planting, watering, weeding, and monitoring the soil. Now they’ve shipped over a thousand of their Genesis model and today have announced of a pair of new models that promise to make their technology more accessible than it ever has been.

In a nod to Tesla, FarmBot is calling this their “Model 3 moment” — the new offering is smaller and leaner to appeal to a wider customer base than their well-heeled, CNC machine loving, early adopters. The new FarmBot Express and Express XL models are now shipped 95% pre-assembled to lower the bar on getting up and running.  They cover two sizes of planting bed: 1.2m x 3m or 2.4m x 6m, with an MSRP of $2295/2795 although there is currently an $800 launch discount available.

For us, FarmBot is the success story of an early Hackaday Prize entrant. From a great idea and a functional prototype, the project has successfully made the transition to commercial viability and holds a genuine promise of making the world a better place by helping people grow some of their own produce. Who knows, in five years time it could be your idea that’s reaching commercial viability, we think you should enter the Hackaday Prize too! 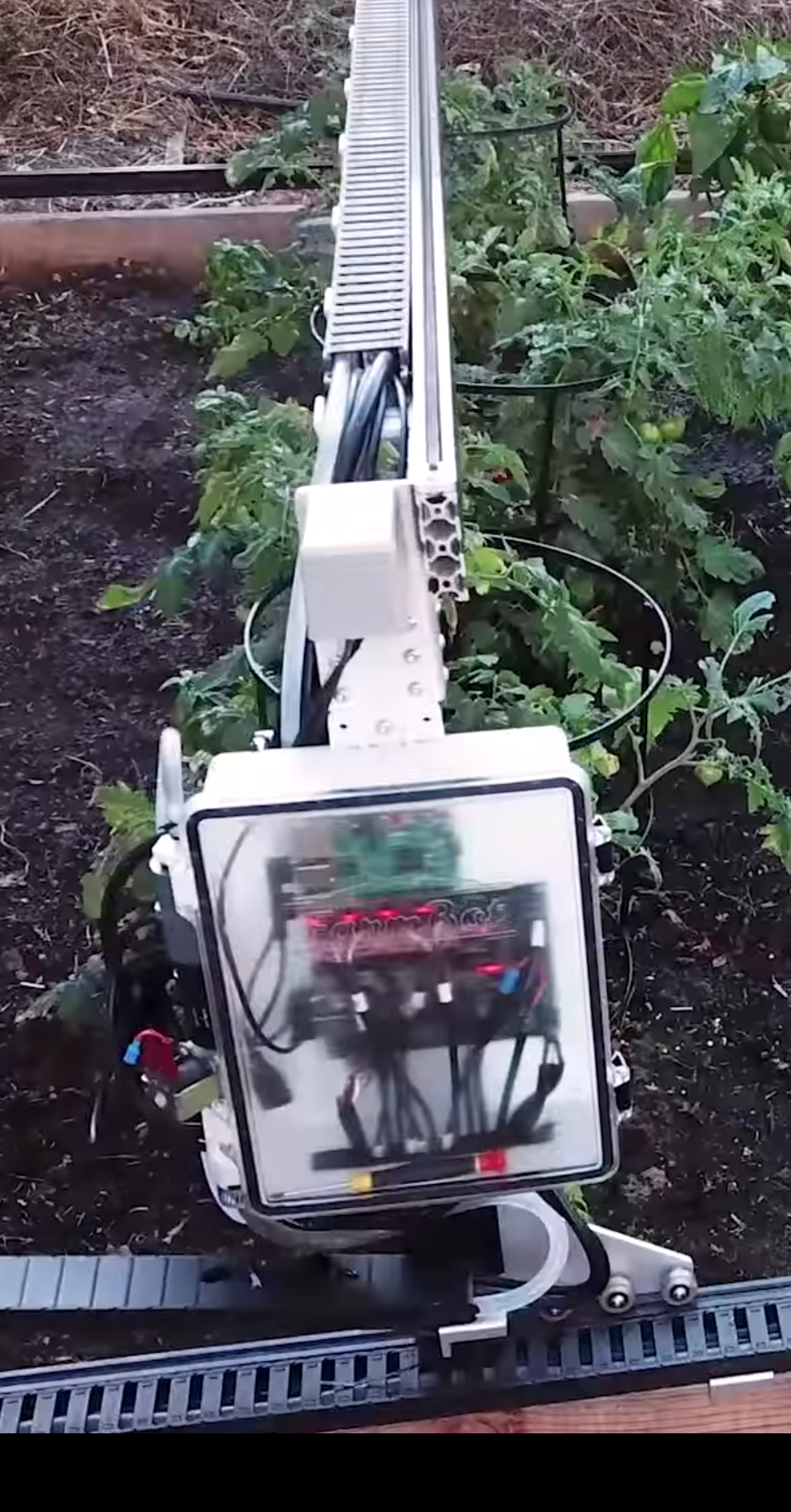 Australian roboticists from the Queensland University of Technology have developed a prototype agricultural robot that uses machine vision to identify both weed and crop plants before either uprooting or poisoning the weeds or applying fertiliser to the crop.

The machine is a wide platform designed to straddle a strip of the field upon which it is working, with electric wheel motors for propulsion. It is solar-powered, and it is envisaged that a farm could have several of them continuously at work.

At a superficial level there is nothing new in the robot, its propulsion, or even the plant husbandry and weeding equipment. The really clever technology lies in the identification and classification of the plants it will encounter. It is on the success or failure of this in real farm environments that the robot’s future will hinge. The university’s next step will be to take it on-farm, and the ABC report linked above has a wonderfully pithy quote from a farmer on the subject. You can see the machine in action in the video below the break.

Farming robots have a significant following among the hardware hacker community, but it is possible that the machine-vision and plant-identifying abilities of this one would be beyond most hackers. However it is still an interesting project to watch, marking as it does a determined attempt to take the robot out of the lab and into real farm settings.

END_OF_DOCUMENT_TOKEN_TO_BE_REPLACED

Every project starts off with an idea. Sometimes those ideas are bigger than one person, or even a small group of people. That was the position [Rory Aronson] found himself in with Farmbot, his finalist entry in the 2015 Hackaday Prize. Documentation was key for [Rory]. Farmbot first came into the world in the form of a white paper. The paper included a request for collaborators, making this an open source project from day 0. Documentation has been important throughout the Farmbot project, so it was naturally the topic of [Rory’s] talk at the 2015 Hackaday SuperConference.