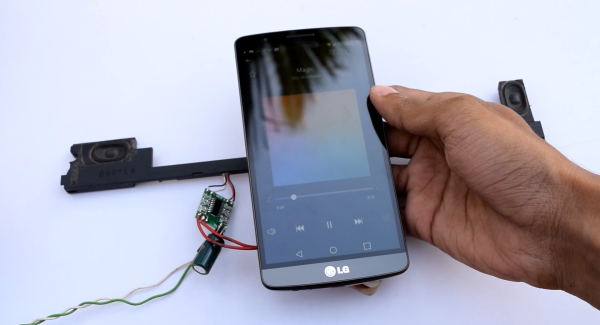 [Kedar Nimbalkar] hyperbolically advertises the ultimate cell phone speaker dock. It costs a dollar. It doesn’t need you to pair with it via Bluetooth or WiFi. It pairs extremely fast, 0.000000000001, he clarifies. It may also look like a broken laptop speaker with a stomped wall wart soldered to it, but who can keep up with industrial design trends these days?

He shows us the device in operation. He starts playing some music on his phone’s speaker. It’s not very loud, so he simply lays the phone on the dock. Suddenly, all the audio fidelity a Dell Lattitude from the 90s can provide erupts from the device! How is this done?

Of course, there’s not much to the trick. Since the cellphone speaker is a coil it can induce a small current in another coil. The resulting voltage can be picked up by an audio amplifier and played through the speakers. Nonetheless it’s pretty cool, and we like his suggestion of betting our friends that we could wirelessly pair with their ear buds. Video after the break.

END_OF_DOCUMENT_TOKEN_TO_BE_REPLACED 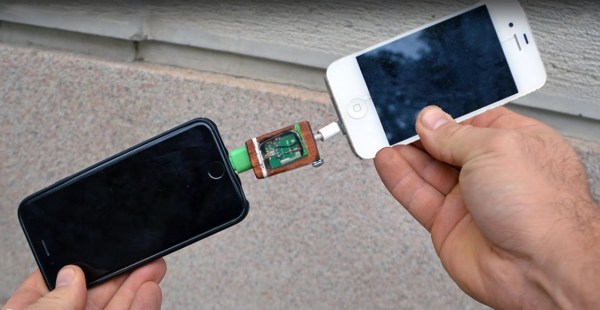 Once again, [Rulof]’s putting his considerable hacking abilities to good use, his good use that is. By modding a few simple parts he’s put together something that he can carry around on his keychain that’ll allow him to steal power from his friend’s phones to charge his own phone.

He starts by cutting away the motor from an iPhone fan to isolate the Micro USB connector. He then removes the charging circuit board from a cheap Chinese USB power bank, and solders wires from the Micro USB connector to one side of the board. Lastly, he cuts away the Lightning connector from a Lightning-to-USB cable and solders that connector to the other side of the circuit board. For longevity and cosmetics, he puts it all in a small wood block and connects a key ring. The result is a small, neat looking box with a Micro USB connector on one side and a Lightning connector on the other. You can see him make it, and then use it to steal power from his friends in the video after the break.

END_OF_DOCUMENT_TOKEN_TO_BE_REPLACED

Diablo. Mech Warrior. Every LucasArts game. There are reasons to build an old PC, and no, emulation cannot completely capture the experience of playing these old games. [Drygol] set out to create a retro PC and succeeded brilliantly. The built features an old desktop AT case (when is the last time you saw one of them?), a 233MHz Pentium with MMX technology, an ancient PCI video card, and an old ISA Ethernet card (with AUI connector). Incoming upgrades will be an ATI 3D Rage PRO, PCI SoundBlaster, and hopefully Windows 98SE.

Right now, we’re gearing up for the Hackaday Superconference next weekend. It’s going to be awesome, and we’re going to announce the winner of the Hackaday Prize. We have another contest going on right now – the Enlightened Raspberry Pi Contest. The name of the game here is documentation. Build something, document it on hackaday.io, and you get some cool prizes.

END_OF_DOCUMENT_TOKEN_TO_BE_REPLACED

Okay, we haven’t even hit Halloween yet, but if you’re planning some kind of holiday project, now’s a good time to start ordering your parts, especially if you’re designing your own PCB. While there’s no PCB involved, [designer2k2] built a desktop “hollow” Christmas tree using some WS2812 RGB LEDs controlled by a microcontroller and powered by USB.

The board running [designer2k2]’s project is a Digispark, a USB powered board by Digistump which contains an ATtiny85. The LEDs, four different sized NeoPixel rings, plus a single pixel for the top, are connected together using some solid wire which makes for a very cool look. The code that runs on the ATtiny is the part that really makes this tree. The code cycles through colors and some light chaser effects, as well as a mode that shows a green tree with some white lights. The whole project is topped off by a routine that spells “XMAS” as you look at the tree from the top down.

We’ve seen some other Christmas tree hacks over the years controlled by various things, but this one is a fairly simple, cool design. [Designer2k2] also released the code for the tree and I’m sure a lot of us could come up with some more light designs.

Check out the video after the break:

END_OF_DOCUMENT_TOKEN_TO_BE_REPLACED

Australian roboticists from the Queensland University of Technology have developed a prototype agricultural robot that uses machine vision to identify both weed and crop plants before either uprooting or poisoning the weeds or applying fertiliser to the crop.

The machine is a wide platform designed to straddle a strip of the field upon which it is working, with electric wheel motors for propulsion. It is solar-powered, and it is envisaged that a farm could have several of them continuously at work.

At a superficial level there is nothing new in the robot, its propulsion, or even the plant husbandry and weeding equipment. The really clever technology lies in the identification and classification of the plants it will encounter. It is on the success or failure of this in real farm environments that the robot’s future will hinge. The university’s next step will be to take it on-farm, and the ABC report linked above has a wonderfully pithy quote from a farmer on the subject. You can see the machine in action in the video below the break.

Farming robots have a significant following among the hardware hacker community, but it is possible that the machine-vision and plant-identifying abilities of this one would be beyond most hackers. However it is still an interesting project to watch, marking as it does a determined attempt to take the robot out of the lab and into real farm settings.

END_OF_DOCUMENT_TOKEN_TO_BE_REPLACED

Projection mapping is pretty magical; done well, it’s absolutely miraculous when the facade of a building starts popping out abstract geometric objects, or crumbles in front of our very eyes. “Dynamic projection mapping onto deforming non-rigid surface” takes it to the next level. (Watch the video below.)

A group in the Ishikawa Watanabe lab at the University of Tokyo has a technique where they cover the target with a number of dots in an ink that is only visible in the infra-red. A high-speed (1000 FPS!) camera and some very fast image processing then work out not only how the surface is deforming, but which surface it is. This enables them to swap out pieces of paper and get the projections onto them in real time.

END_OF_DOCUMENT_TOKEN_TO_BE_REPLACED 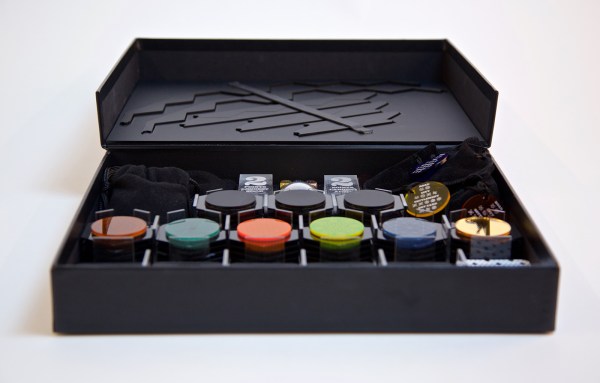