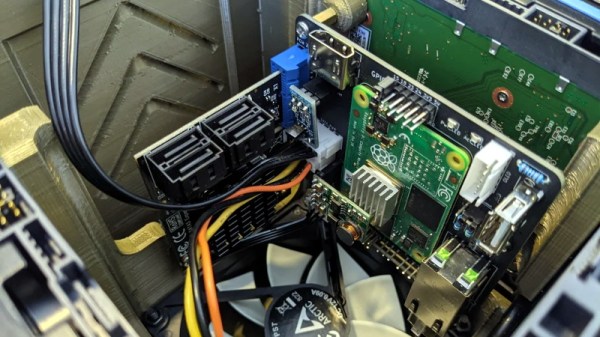 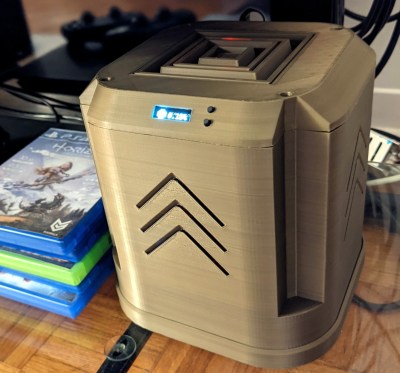 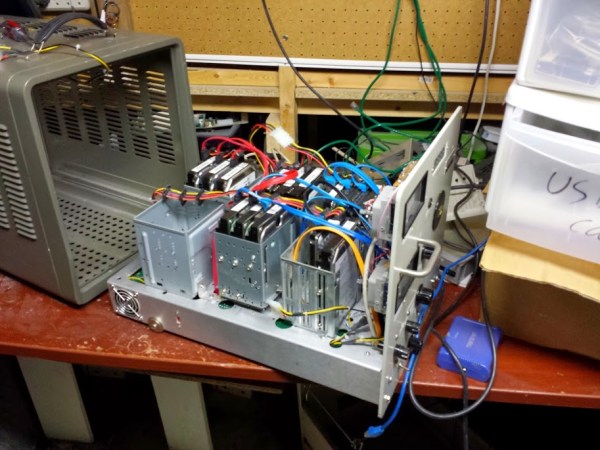 Michigan Tech was throwing out a bunch of old electronic equipment, and [Evan] snagged quite a gem: a UHF signal generator built by Hewlett Packard circa 1955. He stripped all of the remaining electronics out of the case, but kept the slide-out trays and the front instrument panel to create this antique-looking file server.

The bottom tray was where the bulk of the electronics were housed, and since widespread adaptation of transistors for electronics wasn’t common at the time (the first silicon transistor wasn’t made until 1954), the original equipment was all vacuum tubes. This meant that there was just enough space for a motherboard, heat sink, and a couple of power supplies.

The hard drives are held in custom housings in the top portion of the case. The real magic, however, is with the front display panel. [Evan] was able to use the original meters, including a display for “megacycles” which is still technically accurate. The meters are driven by a USB-to-serial cable and a python script that runs on the server.

The antique case is a great touch for this robust file server. Make sure to put it in a prominent place, like next to your antique tube radio. 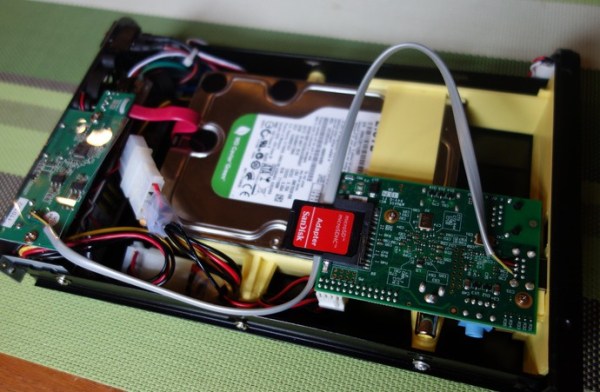 This one nearly ended up in today’s Links post, but on second look we think it deserves a feature of its own. [Profezzorn] designed some mounting brackets to house a file server inside of an external drive enclosure. Click on the instructions tab to get a bit more of the story.

The enclosure that he’s using is meant for a 5.25″ optical drive. It comes with a USB to SATA converter which is how he connects the hard drive to the Raspberry Pi serving the files. His mounting system uses the original holes in the enclosure, the threaded holes of the drive, and the holes in the RPi PCB to mount everything with just ten screws. The enclosure included a Molex power connector. He sacrificed an old connector to make a custom cable for the Pi’s power.

Add a portable power supply, do a little work with the Linux configuration, and you could easily turn this into a pirate box.