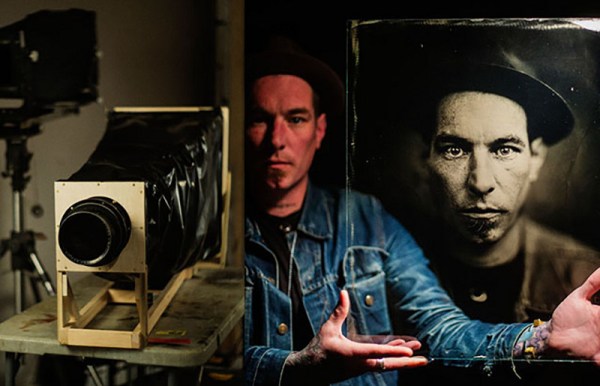 [Giles Clement] was avoiding work in a bar, nursing a pint, and doodling a sketch for a camera. He looked at his sketch, thought, “gee, that looks better than answering emails,” and called his friend. An hour later they were at home depot buying supplies, and ten hours of furious work later, they had a camera. Nothing gets a project done like avoiding work! (See it all happen before your eyes in the video below the break.)

The camera is built around a 500mm f/4.5 Goerz Dogmar lens from around 1918 and was apparently used for aerial recon out of blimps. The frame of the camera is pine and plywood. [Giles] had heard that building the bellows for these cameras had taken other hobbyists months and thousands of dollars. Rather than elaborately folded fabric, he supported his 6 mil plastic bellows on telescoping rigid rods. To view the image while he’s focusing it, he sanded a plate of glass with 100 grit sandpaper to serve as a view screen.

Once the camera was completed, they prepared the plates and exposed photos. The first step, from what we could tell, was to disregard all chemical safety practices. The second step was pouring a substance called collodion on an unsanded glass plate and tilting the plate back and forth until the whole plate had an even coat on it. Then it was put in a bath of silver nitrate to sensitize. Once sensitized the plate was placed in the frame of the focused camera and an astonishing amount of strobe light emitted. After that it’s back to the chemical baths for more safety hazards. The whole process has to be done under fifteen minutes or the plate cures before it can be used. The photos that come out are seriously cool. It’s no wonder these old styles of photography have seen a comeback.

END_OF_DOCUMENT_TOKEN_TO_BE_REPLACED 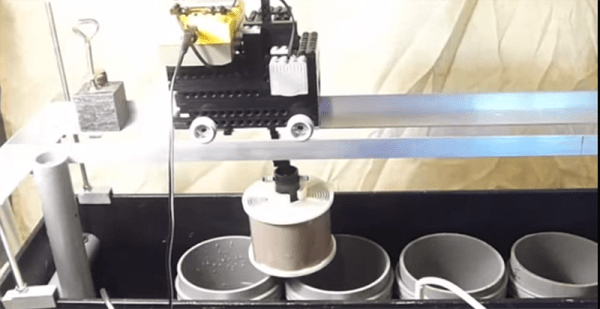 Developing film at home is most certainly a nearly forgotten art nowadays, but there are still a few very dedicated people who care enough to put in the time and study to this craft. [Jan] is one of the exceptional ones. He’s developing 35mm film with Lego (Dutch, Google translate).

For the build, [Jan] is using the Lego RCX 1.0, the first gen of the Lego Mindstorms, released in the late 90s. According to eBay, this is a significantly cheaper option for programmable Lego. The mechanics of the Lego film developer consisted of multiple tanks of chemicals. The film was loaded on a reel, suspended from a Lego gantry, and dunked into each tank for a specific amount of time.

A second revision of the hardware (translate) was designed, with the film loaded into a rotating cylinder. A series of chemicals would then be pumped into this unit with the hope of reducing the amount of chemicals required. This system was eventually built using the wiper fluid pump from a car. Apparently, the system worked well, judging from the pictures developed with this system. Whether it was easy or efficient is another matter entirely.

You can check out a video of the first revision of the Lego film developing system below.

Thanks [Andrew] for sending this in.