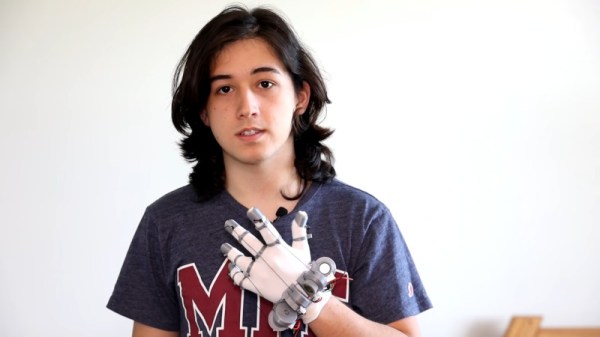 Virtual reality is a slow-moving field in some respects. While a lot of focus is put on optical technologies and headsets, there’s a lot more involved when it comes to believably placing a human being in a virtual environment. So far, we’ve gotten a good start at the visuals and head tracking, but interaction technology is still lagging behind a lot. [Lucas] is working in just that area, iterating heavily on his homebrew VR gloves.

The gloves consists of potentiometers, fitted with spools and attached to the tip of each digit on a wearer’s hand by a string. As the user curls their fingers, the potentiometers turn and the position of the fingers can be measured. The potentiometers are all read via an Arduino, which communicates back to a PC via USB. A custom driver is then used to interact with Valve’s SteamVR software, allowing the glove to be used with a wide variety of existing software.

Thus far, the system is merely tracking finger position, but the spool and string based design is intended to support motors down the line for each finger to create resistance, so the user can gain the feeling of touching and interacting with virtual objects.  The project has the potential to be a cheaper, more accessible alternative than current off-the-shelf solutions. We’ve seen other hand-tracking gloves before, too – though none that track the spread of a wearer’s hand as well as the finger extension. If you’re working on precisely that, please do drop us a line. Video after the break.

END_OF_DOCUMENT_TOKEN_TO_BE_REPLACED

The student projects that come out of [Bruce Land]’s microcontroller- and FPGA-programming classes feature here a lot, simple because some of them are amazing, but also because each project is a building-block for another. And we hope they will be for you.

This time around, [Junyin Chen] and [Ziqi Yang] created a five-in-a-row video game that is controlled by a pointing finger. A camera, pointed at the screen, films the player’s hand and passes the VGA data to an FPGA. And that’s where things get interesting.

An algorithm in the FPGA detects skin color and, after a few opening and closing operations, comes up with a pretty good outline of the hand. The fingertip localization is pretty clever. They sum up the number of detected pixels in the X- and Y-axis, and since a point finger is long and thin, locate the tip because it’s going to have a maximum value in one axis and a minimum along the other. Sweet (although the player has to wear long sleeves to make it work perfectly).

How does the camera not pick up the game going on in the background? They use a black-and-white game field that the skin-color detection simply ignores. And the game itself runs in a Nios embedded processor in the FPGA. There’s a lot more detail on the project page, and of course there’s a demo video below.

We love to follow along with Prof. Land‘s classes. His video series is invaluable, and the course projects have been an inspiration.

END_OF_DOCUMENT_TOKEN_TO_BE_REPLACED

[epokh] sent in this cool project where he wrote some custom code to control the Spykee robot using gestures. He filters out everything but green through his web cam, then wraps his fingers in green tape. He then runs a series of filters to clean it up a little bit. The resulting “blobs” are tracked and converted to motor commands. You can see the setup in action in the video after the break. This guy might look familiar, as we posted a super quick head tracking rig he did with legos recently. Some of you mentioned, in the comments, that the legos were a waste, you’ll find that he thought so too, and ended up fabbing a simple rig to take the place of the legos.