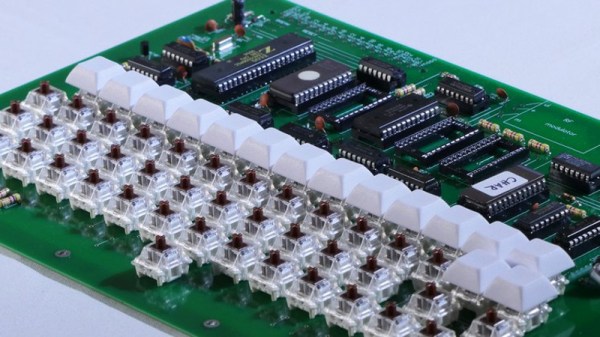 One of the humbling things about writing for Hackaday is the breadth of experience among our colleagues, despite one’s own skills or achievements there is probably for all of us a level of impostor syndrome when we look at their work. This week provided a reminder of this, while taking a closer look at the crowdfunder for a documentary about the Galaksija, the Yugoslavian 8-bit computer from the 1980s designed by our colleague [Voja Antonić]. Not only will the documentary be produced, but also they are recreating the Galaksija as a kit, so you can experiment with this historic computer for yourself. The campaign has reached passed its goal a couple times over but still has a few days left, so jump in if you are interested.

With the advantage of being able to reach out to [Voja] as a colleague, it was time to secure the straight dope on the project. Though he’s not spearheading it, aside from appearing in the documentary he’s also produced the new Galaksija PCB to take advantage of double-sided manufacture and remove the wire links that were a feature of the original.

In that sense this isn’t so much a clone of the original as an updated version from the same designer, with only a few other updates such as key switches and connectors where the exact original component could no longer be sourced. A particularly fascinating side-tale comes from a reprint of the first Galaksija magazine. Photo-reproductions of the original printed pictures did not yield good results, so [Voja] built from scratch an entirely original Galaksija, carefully recreating the framing of each step shown in those original photos.

This project has faced its fair share of obstacles before launching on Crowd Supply, so it’s very good indeed to see it receive its funding with time to spare. We look forward to seeing the results, meanwhile you can see a promo video in Serbian with Youtube’s English subtitling below the break. You can read [Voja]’s writing on the machine in Hackaday articles past, but don’t miss the opportunity to meet him at a live event — he’s the mastermind behind a number of hardware badges at Hackaday events.

END_OF_DOCUMENT_TOKEN_TO_BE_REPLACED

Hardly a week goes by without a headline screaming about some asteroid or another making a close approach to Earth; it’s only by reading the fine print that we remember what an astronomer’s definition of “close” means. Still, 2020 being what it is, it pays to stay on top of these things, and when you do the story can get really interesting. Take asteroid 2020 SO, a tiny near-Earth asteroid that was discovered just last week. In a couple of weeks, 2020 SO will be temporarily captured into Earth orbit and come with 50,000 km near the beginning of December. That’s cool and all, but what’s really interesting about this asteroid is that it may not be a rock at all. NASA scientists have reverse-engineered the complex orbit of the object and found that it was in the vicinity of Earth in late 1966. They think it may be a Centaur booster from the Surveyor 2 moon mission, launched in September 1966 in the runup to Apollo. The object will be close enough for spectral analysis of its. surface; if it’s the booster, the titanium dioxide in the white paint should show up loud and clear.

Lasers are sort of forbidden fruit for geeks — you know you can put an eye out with them, and still, when you get your hands on even a low-power laser pointer, it’s hard to resist the urge to shine it where you shouldn’t. That includes into the night sky, which as cool as it looks could be bad news for pilots, and then for you. Luckily, friend of Hackaday Seb Lee-Delisle has figured out a way for you to blast lasers into the night sky to your heart’s content. The project is called Laser Light City and takes place in Seb’s home base of Brighton int he UK on October 1. The interactive installation will have three tall buildings with three powerful lasers mounted on each; a smartphone app will let participants control the direction, shape, and color of each beam. It sounds like a load of fun, so check it out if you’re in the area.

We got an interesting story from a JR Nelis about a quick hack he came up with to help his wife stay connected. The whole post is worth a read, but the short version of the story is that his wife has dementia and is in assisted living. Her landline phone is her social lifeline, but she can’t be trusted with it, lest she makes inappropriate calls. His solution was to modify her favorite cordless phone by modifying the keypad, turning it into a receive-only phone. It’s a sad but touching story, and it may prove useful to others with loved ones in similar situations.

We pay a lot of attention to the history of the early computer scene, but we tend to concentrate on computers that were popular in North America and the UK. But the Anglo-American computers were far from the only game in town, and there’s a new effort afoot to celebrate one of the less well-known but still important pioneer computers: the Galaksija. Aside from having a cool name, the Yugoslavian Z80 computer has a great story that will be told in documentary form, as part of the crowdsourced Galaksija project. The documentary stars our own Voja Antonic, who was key to the computer’s development. In addition to the film, the project seeks to produce a replica of the Galaksija in kit form. Check out the Crowd Supply page and see if it’s something you’re willing to back.

There’s an interesting new podcast out there: the Pick, Place, Podcast. Hosted by Chris Denney and Melissa Hough, it comes out every other week and is dedicated to the electronic assembly industry. They’ve currently got eight episodes in the can ranging from pick and place assembly to parts purchasing to solder paste printing. If you want to learn a little more about PCB assembly, this could be a real asset. Of course don’t forget to make time for our own Hackaday Podcast, where editors Mike and Elliot get together to discuss the week in hardware hacking.