Electrodermal activity, or galvanic skin response has a lot of practical applications. Everything from research into emotional states to significantly more off-the-wall applications like the E-meter use electrodermal activity. For his Hackaday Prize entry, [qquuiinn] is building a wearable biofeedback wristband that measures galvanic skin response that is perfect for treating anxiety or stress disorders by serving as a simple and convenient wearable device.

Detecting electrodermal activity has been within the capability of anyone with an ohmmeter for over a hundred years. [quin²] is doing something a little more complex than the most primitive modern means of measuring galvanic skin response and using a dual op-amp to sense the tiny changes in skin resistance. This data is fed into an ATMega328 which sends it out to a tiny LED display in the shape of an ‘x’.

Reading electrodermal activity is easy, but doing it reliably in a wearable device is not. There are issues with the skin contacts to work though, issues with the amplifier, and putting the whole thing in a convenient package. [qquuiinn] asked the community about these problems in group discussion on the hacker channel and got a lot of really good advice. That’s a great example of what a project on hackaday.io can do, and a great project for the Hackaday Prize. 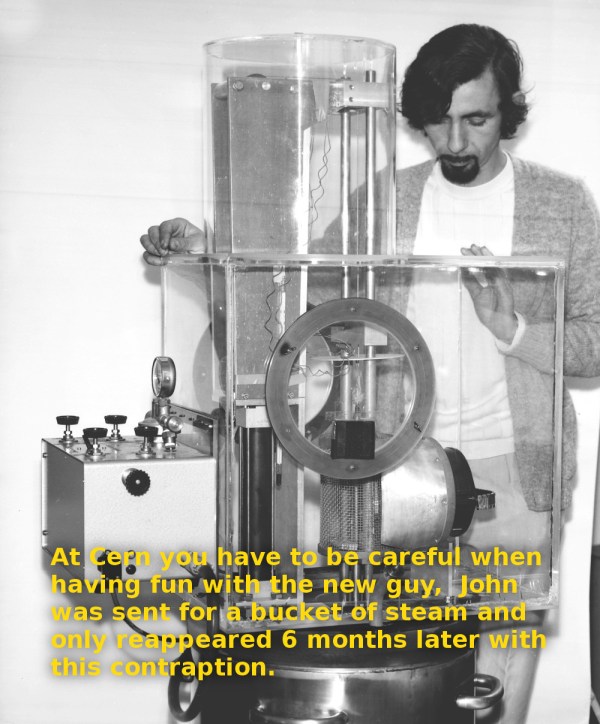 Week 25 of the Caption CERN Contest is complete. Thanks to all the entrants who tried to figure out exactly what is going on with this scientist and his strange box. We’re still just as confused (and amused) as you are. He definitely is focused on the box and whatever is in there.

So, without further adieu, here are the winners of this week’s contest:

This week’s winner is [Jack Laidlaw] with  “At Cern you have to be careful when having fun with the new guy, John was sent for a bucket of steam and only reappeared 6 months later with this contraption.” Jack is a web designer based in Scotland. He’s an avid fan of electronics, and is going to be getting a hands on course with his new Teensy 3.1 from The Hackaday Store!

A bit of a break

After 25 great weeks of the Caption CERN Contest, it’s time to take a bit of a break. The Hackaday Prize competition is really heating up, along with plenty of other work here at Hackaday HQ. I’ve said it each week, but I have to give one more big thank you to all the folks who have entered and made this a great contest. It’s been a pleasure to read the captions every week and to award the prizes to all the top captions. The science and fun don’t end here though – There are plenty of images in CERN’s archives waiting to be discovered. Take some time and browse through. You won’t regret it!

Finally, I’d just like to say don’t forget to document your own work, and take notes on what each image contains. Be it on Hackaday.io, on Github, or even on your own drive. Otherwise you might see your own hacks in the next incarnation of the Caption CERN Contest!

During World War II a scientist named Georg Otto Erb developed the molten salt battery for use in military applications. The war ended before Erb’s batteries found any real use, but British Intelligence wrote a report about the technology and the United States adopted the technology for artillery fuses.

Molten salt batteries have two main advantages. First, you can store them for a long time (50 years or more) with no problems. Once the salt melts (usually from a pyrotechnic charge), the battery can produce a lot of energy for a relatively short period of time thanks to the high ionic conductivity of the electrolyte (about three times that of sulfuric acid).

[OrbitalDesigns] couldn’t find a DIY version of a molten salt battery so he decided to make one himself. Although he didn’t get the amount of power you’d find in a commercial design, it did provide 1.6V and enough power to light an LED.

The electrolyte was a mixture of potassium chloride and lithium chloride and melts at about 350 to 400 degrees Celsius. He used nickel and magnesium for electrodes. Potassium chloride is used as a salt substitute, so it isn’t dangerous to handle (at least, no more dangerous than anything else heated to 400 degrees Celsius). The lithium compound, however, is slightly toxic (even though it was briefly sold as a salt substitute, also). If you try to replicate the battery, be sure you read the MSDS for all the materials.

END_OF_DOCUMENT_TOKEN_TO_BE_REPLACED

Breaking a stud or a bolt is a pretty common shop catastrophe, but one for which a fair number of solutions exist. Drill it out, shoot in an extractor, or if you’re lucky, clamp on some Vise-Grips and hope for the best. But when a drill bit breaks off flush in a hole, there aren’t a lot of options, especially for a small bit. If the stars align, though, you may follow this video guide to dissolve the drill bit and save the part.

Looks like [Adam Prince] lucked out with his broken bit, which he was using to drill the hole for a pin in a small custom brass hinge. It turns out that a hot solution of alum (ammonium aluminum sulfate), which is available in the spice rack of your local supermarket, will dissolve the steel drill bit without reacting with the brass. Aluminum is said to be resistant to the alum as well, but if your busted bit is buried in steel, you’re out of luck with this shop tip.

We’re a bit disappointed that [Adam]’s video ends somewhat abruptly and before showing us the end result. But a little Googling around reveals that this chemical technique is fairly well-known among a group that would frequently break bits in brass – clockmakers. It remains to be seen how well it would work for larger drill bits, but the clocksmiths seem to have had success with their tiny drills and broaches.

As for the non-dissolved remains of the broken bit, why not try your hand at knife making?

The experiment came to a tragic end (vandalism, naturally) in Philadelphia PA, after travelling a month across Canada, ten days in Germany, and yet another month across the Netherlands. It survived two weeks in the USA, which is more than the cynics would have guessed, but a few Grand Canyons short of the American Dream.

Professors [David Smith] and [Frauke Zeller] built hitchBot to see how far cuteness and social media buzz could go. [Smith], a former hitchhiker himself, also wanted hitchBot to be a commentary on how society’s attitudes toward hitching and public trust have changed since the 70s. Would people would pick it up on the side of the street, plug it in to their own cigarette lighters, and maybe even take it to a baseball game? Judging by hitchBot’s Twitter feed, the answer was yes. And for that, little bucket, we salute you!

But this is Hackaday, and we don’t pull punches, even for the recently deceased. It’s not clear how much “bot” there was in hitchBot. It looks like it had a GPS, batteries, and a solar cell. We can’t tell if it took its own pictures, but the photos on Twitter seem to be from another perspective. It had enough brains inside to read out Wikipedia entries and do some rudimentary voice recognition tasks, so it was a step up from Tweenbots but was still reassuringly non-Terminator.

Instead, hitchBot had more digital marketing mavens and social media savants on its payroll than [Miley Cyrus] and got tons of press coverage, which seems to have been part of the point from the very start. And by writing this blog post, we’re playing right into [Smith] and [Zeller]’s plan. If you make a robot / art project cute enough to win the hearts of many, they might just rebuild it. [Margaret Atwood] has even suggested on Twitter that people might crowdfund-up a hitchBot 2.0.

Our suggestion? Open-source the build plans, and let thousands of hitchBots take its place.

CMOS opened the door for many if not most of the properties needed for today’s highly integrated circuits and low power portable and mobile devices. This really couldn’t happen until the speeds and current drive capabilities of CMOS caught up to the other technologies, but catch up they did.

END_OF_DOCUMENT_TOKEN_TO_BE_REPLACED

DEFCON is huge. Last year attendance tipped at about 16k, and we’d wager this year will be even bigger. [Brian] and I will both be among those attending (more on that below) but I wanted to take this time to show you the right way to do a Hacker Conference.

Build Your Own Badge

We met a ton of people at DEFCON 22 last year, but the Whiskey Pirates made a lasting impression. I first ran across two of their crew walking the hallways of the con with this awesome badge. How can you not stop and strike up a conversation about that? Turns out this group of friends have been meeting up here for years. This year they went all out, designing one badge to rule them all. And like any good hacker project, they weren’t able to finish it before getting to the hotel.

Set Up Your Electronics Lab

This badge’s LEDs changed to purple

So, you didn’t stuff your boards before leaving home? For the Whiskey Pirates this is not even remotely a problem. They just brought the electronics lab to their suite in the Rio Hotel.

On the bathroom vanity you find the binocular microscope which was good for troubleshooting an LED swap on the official conference badge. An entire cart with hot-air, multiple solder stations, oscilloscopes, and more was on hand. I populated the surface mount LEDs on the badge the crew gave to me. When I was having trouble seeing my work they called the front desk for an additional lamp. You should have seen the look on the bellhop’s face when he walked in!

A bit of marathon assembly and everyone from the Whiskey Pirates (plus me) had a working badge, demonstrated in the video below. But this isn’t where the fun stops.