[Sophi Kravitz] and [Michael Guilfoil] are heading north of the border to meet up with our friends at HacklabTO. They’ll be hosting a Bring A Hack meetup with drinks, snacks, and swag.

Since this is a Bring A Hack, attendees are encouraged to bring whatever project you’re working on and show it off, give a lightning talk, and pitch it to the community. [Sophi]’s last visit to Toronto brought some crazy hardware to the meetup, including a gaming glove for a Commodore 64, a demonstration of Ontario’s power plants, testing hamburgers for anything that is not beef with PCR, and analog synthesizers.

Since the Hackaday Prize is in full swing, this is an excellent opportunity to team up with fellow Torontonians for a great Prize entry, or just bounce a few ideas off people to see if your idea is feasible.

The meet and greet at the Hacklab is free, but we would request that you RSVP for the event. The event is also on Hackaday.io, just in case you’d like to chat with [Sophi] or other attendees. 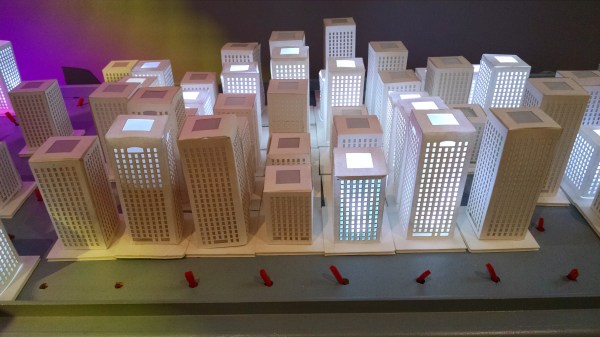 Canada! Just in time for Spring to hit. I went to Toronto to speak at FITC, an arts and technology conference, co-host a Hackaday meetup with HackLab TO, visit the DigiPlaySpace at TIFF, and to check out Globacore’s new digs.

FITC is a conference which celebrates the creativity in technology. Pictured above is Diorama Rama designed by [Christopher Lewis] and [Creative Technologists of Toronto] and built over 4 days by participants at FITC. The buildings are laser cut paper, and participants create a simple circuit using an ATtiny. A message is coded into the chip in ASCII and the buildings blink an individual message back in Morse code, each building blinking a different message. It’s pretty interesting to use a Morse –> ASCII phone app (Morse Tools) to read the messages.

Hackaday Prize judge [Micah Elizabeth Scott] gave a talk about her work. [Jessica Rosenkrantz] of Nervous System spoke about her company’s process when designing mathematically based objects. She spoke about her 3D printed dress pictured below and how it was made. Amazing! I also got to show off my newly minted Breathe project at FITC.

After FITC ended, HackLab co-hosted a meetup with us. A team from HackLab was a 2014 Hackaday Prize Semifinalist and won $1000 in components with their Retro Populator, a Pick and Place machine retrofit onto a 3D printer. We had beer as well as almond-cream flavored non-alcoholic drinks from the Luma Droid, a drink mixing robot. HackLab is a good-sized hackerspace, with a huge room for a meetup, a full kitchen and vegan dinner served frequently, plus a shop tools room all by itself.

Eric Boyd kicks it off

Among the lightning talks, [Pearl Chen] brought her Intel Edison-powered alarm clock that has but one function — to tell her when she is running late. [Johannes van der Horst] brought a USB current monitor that had many of us fascinated for about an hour at the end of the evening, plugging in a phone or a battery just to see the numbers climb. [Eric Boyd] talked about the DIY Bio projects that are going on at HackLab. They are testing meat using PCR to see if it is indeed, beef. Ew.

[Andrew Kilpatrick] of Kilpatrick Audio showed us an older version of his synthesizer before showing us his newest revision, Phenol, which looks pretty slick.

[Hugh Elliot] spoke about a light-photography project. [Leif Bloomquist] spoke about a gaming glove project that Hackaday had previously covered. Leif had a Commodore 64 with him and all the games on it fit into 1 GB! [Nadine Lessio] discussed how many programs claim that you can become an expert in a few hours, but in fact, things are not easy. [Jay Vaidya] showed us an IFTTT hack which controls heaters and AC. [Andy Forest] showed us an impressive interactive model of Ontario’s power system that kids at Steam Labs created.

That was a super fun meetup! Thanks HackLab for hosting. We’ve got a bunch of upcoming meetups and larger events in LA, NYC, Bangalore, San Francisco and Shenzhen. Check our events page for what, where, and when, We’d love to see you.

I stopped by TIFF’s Bell Lightbox to see the DigiPlaySpace exhibit. [Micah Scott] did a collaboration with Ryerson University’s RTA School of Media which welcomes you as you walk in. Note: all photos are lifted directly from TIFF.net’s website.

My final stop on this tour was to visit Globacore’s new offices. We spent a day or so hacking on a VR controller for their newest game called Power Cube. Power Cube is an Oculus Rift experience with a custom game controller holding an accelerometer, a gyroscope and magnetometer that links into the game directly.

See ya Toronto, I can’t wait to come back!

Our own Mythical Creature, [Sophi Kravitz] is headed North of the border to talk about all things hardware hacking! As always, we love to see what people are working on in their labs, basements, garages, and workplaces. Make sure to bring your builds with you to show off to the rest of the crowd. [Sophi] will have her Breathe project on hand. Solenoids, balloons, compressed air, and visualizations are the secret sauce behind this clever interactive build.

Since there will be snacks, hacks, drinks, and swag we’d appreciate a quick RSVP (use the link at the top of this post) just so we know you’re incoming. Apart from seeing a slew of cool builds there will be lightning talks, some information about the 2015 Hackaday Prize, and if you haven’t been to the Hacklab before this is the perfect time for your first tour. We know there’s a lot of awesome to be seen there!

[Jed] from Toronto’s hackerspace HackLab.TO coded the theme from Super Mario Bros. for their laser cutter. He’s posted the ruby code that generates the g-code from a simple tablature.