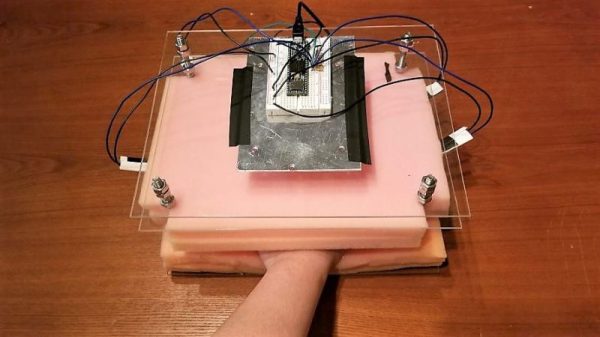 Consider the complexity of the appendages sitting at the end of your arms. The human hands contain over a quarter of the entire complement of bones in the body, use dozens of muscles both in the hand itself and extending up the forearm, and are capable of infinite variance in the movements they can create. They are exquisite machines.

And yet when it comes to virtual reality, most simulations treat the hands like inert blobs. That may be partly due to their complexity; doing motion capture from so many joints can be computationally challenging. But this pressure-sensitive hand motion capture rig aims to change that. The product of an undergraduate project by [Leslie], [Hunter], and [Matthew], the idea was to provide an economical and effective way to capture gestures for virtual reality simulators, which generally focus on capturing large motions from the whole body.

The sensor consists of a sandwich of polyurethane foam with strain gauge sensors embedded within. The user slips his or her hand into the foam and rests the fingers on the sensors. A Teensy and twenty lines of code translate finger motions within the sandwich into five axes of joystick movement, which is then sent to Unreal Engine, where finger motions were translated to a 3D-model of a hand to play a VR game of “Rock, Paper, Scissors.”

[Leslie] and her colleagues have a way to go on this; testers complained that the flat hand posture was unnatural, and that the foam heated things up quickly. Maybe something more along the lines of these gesture-capturing gloves would work?

According to the World Federation of the Deaf, there are around 70 million people worldwide whose first language is some kind of sign language. In the US, ASL (American Sign Language) speakers number from five hundred thousand to two million. If you go to Google translate, though, there’s no option for sign language.

[Alex Foley] and friends decided to do something about that. They were attending McHack (a hackathon at McGill University) and decided to convert speech into sign language. They thought they were prepared, but it turns out they had to work a few things out on the fly. (Isn’t that always the case?) But in the end, they prevailed, as you can see in the video below.

END_OF_DOCUMENT_TOKEN_TO_BE_REPLACED

All hands are on deck over at MIT where a very handy new trackpad has been created that will be able to give users a free hand to do other tasks. The device is called the NailO and attaches to one’s thumbnail, which allows the user an easy and reportedly natural way to use a trackpad while your hands are full, dirty, or otherwise occupied.

The device reportedly works like any normal trackpad, but is about the size of a quarter and attaches to the thumbnail in such a way that it takes advantage of the natural motion of running an index finger over the thumbnail. It communicates via Bluetooth radio, and has four layers which all go hand-in-hand: an artistic covering (to replicate the look of a painted fingernail), the sensors, the circuitry, the battery, and presumably an adhesive of some sort.

Details are quite sparse, but the device is scheduled to make its debut at the Computer Human Interaction conference in Seoul, South Korea very soon. If it can be made less bulky (although it’s somewhat uncomfortable to call something smaller than a quarter “bulky”) this might be, hands down, the next greatest evolution in mouse technology since multi-touch. We have to hand it to MIT for coming up with such a unique wearable! 3D printing – with the promise of low-scale manufacturing and custom parts – is ideal for the prosthetic industry, but so far prosthetic hands have been a very, very hard nut to crack. [Joel] has been working on the Open Hands Project, a project that aims to make robotic prosthetics accessible to makers, researchers, and amputees alike.

Even though the mechanisms inside the hand are fairly simple – DC gear motors retracting steel cable ‘tendons’ – [Joel] was able to pack all this equipment into a very small volume that isn’t much bigger than real, meat-based hands. To actuate the mechanical muscles in the hand, the user simply flexes a few muscles in their forearm. These electrical signals are picked up by a suite of custom electronics and tell the Open Hand what to do

In [Joel]’s Indiegogo video, he goes over what makes his robohands work with a little help from [Liam Corbett], hand amputee. Aesthetically, the Open Hand is a big improvement over [Liam]’s two-pronged hook, and with the dexterity demonstrated in the video, possibly a lot more capable.