Based in the US as Hackaday is, it’s easy to overload the news with stories from home. That’s particularly true with dark tales of the expanding surveillance state, which seem to just get worse here on a daily basis. So we’re not exactly sure how we feel to share not one but two international stories of a dystopian bent; one the one hand, pleased that it’s not us for a change, but on the other, sad to see the trend toward less freedom and more monitoring spreading.

The first story comes from Mexico, where apparently everything our community does will soon be illegal. We couch that statement because the analysis is based on Google translations of reports from Mexico, possibly masking the linguistic nuances that undergird legislative prose. So we did some digging and it indeed appears that the Mexican Senate approved a package of reforms to existing federal copyright laws that will make it illegal to do things like installing a non-OEM operating system on a PC, or to use non-branded ink cartridges in a printer. Reverse engineering ROMs will be right out too, making any meaningful security research illegal. There appear to be exceptions to the law, but those are mostly to the benefit of the Mexican government for “national security purposes.” It’ll be a sad day indeed for Mexican hackers if this law is passed.

The other story comes from Germany, where a proposed law would grant sweeping surveillance powers to 19 state intelligence bodies. The law would require ISPs to install hardware in their data centers that would allow law enforcement to receive data and potentially modify it before sending it on to where it was supposed to go. So German Internet users can look forward to state-sponsored man-in-the-middle attacks and trojan injections if this thing passes.

OK, time for a palate cleanser: take an hour to watch a time-lapse of the last decade of activity of our star. NASA put the film together from data sent back by the Solar Dynamics Observatory, a satellite that has been keeping an eye on the Sun from geosynchronous orbit since 2010. Each frame of the film is one hour of solar activity, which may sound like it would be boring to watch, but it’s actually quite interesting and very relaxing. There are exciting moments, too, like enormous solar eruptions and the beautiful but somehow terrifying lunar transits. More terrifying still is a massive coronal mass ejection (CME) captured in June 2011. A more subtle but fascinating phenomenon is the gradual decrease in the number of sunspots over the decade as the Sun goes through its normal eleven-year cycle.

You’ll recall that as a public service to our more gear-headed readers that we recently covered the recall of automotive jack stands sold at Harbor Freight, purveyor of discount tools in the USA. Parts for the jack stands in question had been cast with a degraded mold, making the pawls liable to kick out under load and drop the vehicle, with potentially catastrophic results for anyone working beneath. To their credit, Harbor Freight responded immediately and replaced tons of stands with a new version. But now, Harbor Freight is forced to recall the replacement stands as well, due to a welding error. It’s an embarrassment, to be sure, but to make it as right as possible, Harbor Freight is now accepting any of their brand jack stands for refund or store credit.

And finally, if you thought that the experience of buying a new car couldn’t be any more miserable, wait till you have to pay to use the windshield wipers. Exaggeration? Perhaps only slightly, now that BMW “is planning to move some features of its new cars to a subscription model.” Plans like that are common enough as cars get increasingly complex infotainment systems, or with vehicles like Teslas which can be upgraded remotely. But BMW is actually planning on making options such as heated seats and adaptive cruise control available only by subscription — try it out for a month and if you like it, pay to keep them on for a year. It would aggravate us to no end knowing that the hardware supporting these features had already been installed and were just being held ransom by software. Sounds like a perfect job for a hacker — just not one in Mexico. 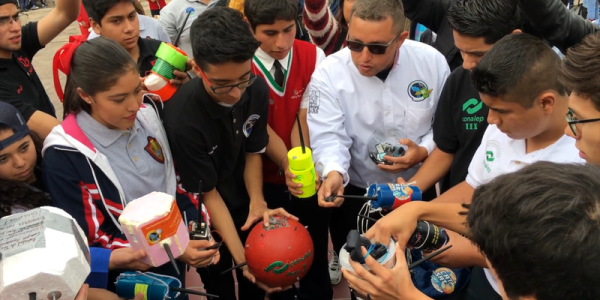 No matter whether you call them “picosatellites” or “high altitude balloons” or “spaceblimps”, launching your own electronics package into the air, collecting some high-altitude photos and data, and then picking the thing back up is a lot of fun. It’s also educational and inspirational. We’re guessing that 264 students from 30 high schools in Aguascalientes Mexico have new background screens on their laptops today thanks to the CatSat program (translated here by robots, and there’s also a video to check out below).