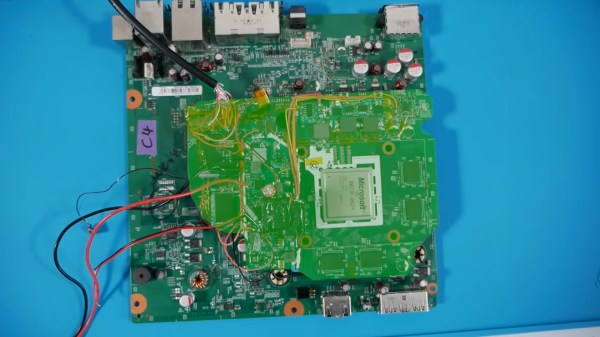 One of the coolest things in the retro gaming scene is making desktop consoles into portables. [Millomaker] is building an XBox 360 handheld, and the first step is shrinking the console’s motherboard.

Most 360 portables up to this point have been laptop-shaped instead of something handheld, but that hasn’t stopped people from trying to miniaturize the console further. [Millomaker]’s cut seems to be the most successful so far, shrinking the device’s motherboard down to the size of its old competitor, the Wii.

In the video (in French with available auto-translation) below the break, you can get the full harrowing journey during which several 360s sacrificed their motherboards for the cause despite [Millomaker]’s meticulous testing between component removals. This is truly an awesome mod, and we’re glad that the video shows not only the successes, but also the missteps on the way. It wouldn’t really be a hack if it was smooth sailing, would it?

For more fun with handhelds, check out the Sprig Open Source Handheld, a Portable PS2, or this Handheld Linux Computer.

END_OF_DOCUMENT_TOKEN_TO_BE_REPLACED He housed the rest of it (complete with custom cooling fans!) inside of one of those nice aluminum briefcases, complete with a widescreen LCD monitor, and computer speakers. He even fit the power supply inside — all you have to do is plug it in! There’s also room for at least one controller, whose holding spot doubles as space for the disc drive to eject. END_OF_DOCUMENT_TOKEN_TO_BE_REPLACED