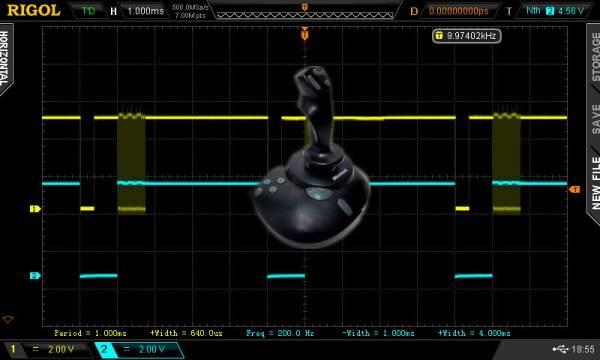 The Sidewinder line was a series of gaming peripherals produced by Microsoft, starting in the 1990s. After some initial stumbles, several cutting edge joysticks were released, at a time when the home computer market was in a state of flux, transitioning from legacy interfaces like serial and parallel to the more modern USB. In this interim period, Sidewinder joysticks used a special method to communicate digitally over the game port interface, which more typically used a kludge to read joysticks in an analog manner. [MaZderMind] managed to reverse engineer this protocol, and implemented the interface on an AVR microcontroller.

The technology is loosely described in US Patent 5628686, which discusses the method used to communicate bidirectionally with the Sidewinder joystick. [MaZderMind] found that the patent documents didn’t correspond exactly with how the Sidewinder Precision Pro communicated, but it was close enough that the operation could be reverse engineered.

The plan is to use the vintage joystick to control a quadcopter, so the interface was implemented on an AVR, and a graphical LCD installed to act as a display for testing the operation. [MaZderMind] also captured data on an oscilloscope to indicate in detail the quirks of the joystick’s operation.

Yes, it’s entirely possible to use a more modern microcontroller with a USB joystick. However, there are few that measure up to the standards of the old Sidewinder hardware, and sometimes the best tool for the job is the one you’ve got with you. A traditional single joystick is a different take on quadcopter control, but there’s other options – gesture control is possible, too.