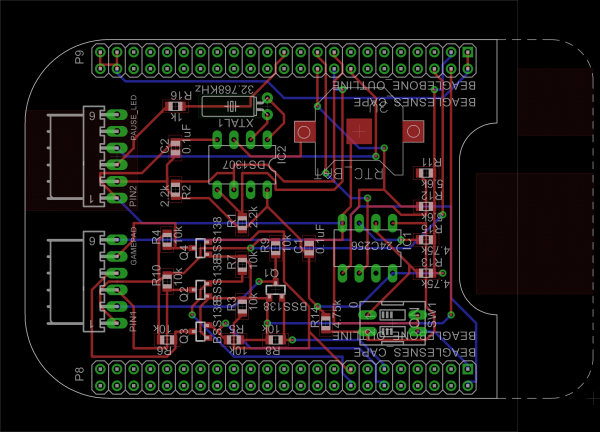 So you want to play some retro games on your BeagleBone, just load up Linux and start your favorite emulator right? Not if you’re serious about it. [Andrew Henderson] started down this path with the BeagleBoard-xM (predecessor of the BeagleBone Black) and discovered that the performance with Snes9X wasn’t quite what he had in mind. He got the itch and created a full-blown distro called BeagleSNES which includes bootloader and kernel hacks for better peformance, a custom GUI, and is in the process of developing hardware for the embedded gaming rig. Check out the documentation that goes along with the project (PDF); it’s a blueprint for how open source project guides should be presented!

The hardware he’s currently working on is a Cape (what add-on boards for the BBB are called) that adds connectors for original Nintendo and Super Nintendo controllers. It also includes an RTC which will stand in for the real-time clock features included in some cartridges (Pokemon Yellow). Also in the works is a 3D printed enclosure which would turn it into a portable, something like this other BBB portable hack.

Check out a demo of what BeagleSNES can do in the video after the break.

END_OF_DOCUMENT_TOKEN_TO_BE_REPLACED

Gizmodo has done us all a favor by wading through many forum posts and condensing them into a handy guide to installing Ubuntu on your Playstation 3. It covers some of the caveats of going this route. You have to backup all of your game data before starting since the system repartitions the drive. Ubuntu installs without any problem, but because the cell processor is a PowerPC architecture it means not everything has been ported to it. There are a few things you need to install to get the Sixaxis controller to be recognized as a joystick. Super Nintendo emulator SNES9X is available and works, mostly. It doesn’t support fullscreen and cries if you reconfigure the buttons.

Supporting developers through alternate operating systems isn’t new to Sony. With the original Playstation, they released Net Yaroze, a consumer grade dev kit. The Playstation 2 was the first time they officially supported Linux on a game console (our first Linux machine). The ground breaking thing about the Playstation 3 was bundling in Linux support with every single console; no specialized hardware needed. Unfortunately they’re not near as open with the PSP.