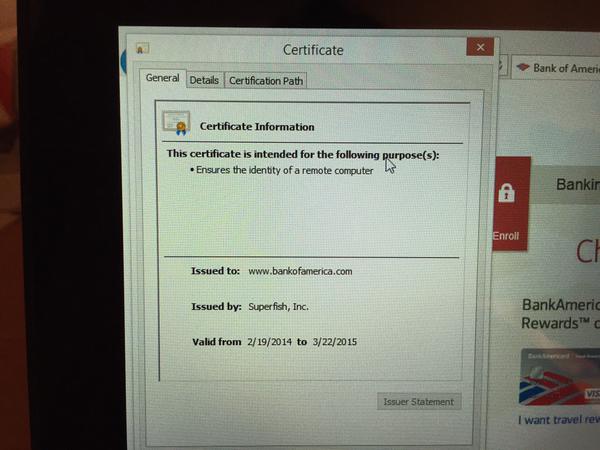 If you’ve ever purchased a new computer then you are probably familiar with the barrage of bloatware that comes pre-installed. Usually there are system tools, antivirus software trials, and a whole bunch of other things that most of us never wanted in the first place. Well now we can add Superfish spyware to the list.

You may wonder what makes this case so special. A lot of PC’s come with software pre-installed that collect usage statistics for the manufacturer. Superfish is a somewhat extreme case of this. The software actually installs a self-signed root HTTPS certificate. Then, the software uses its own certificates for every single HTTPS session the user opens. If you visit your online banking portal for example, you won’t actually get the certificate from your bank. Instead, you’ll receive a certificate signed by Superfish. Your PC will trust it, because it already has the root certificate installed. This is essentially a man in the middle attack performed by software installed by Lenovo. Superfish uses this ability to do things to your encrypted connection including collecting data, and injecting ads.

As if that wasn’t bad enough, their certificate is actually using a deprecated SHA-1 certificate that uses 1024-bit RSA encryption. This level of encryption is weak and susceptible to attack. In fact, it was reported that [Rob Graham], CEO of Errata Security has already cracked the certificate and revealed the private key. With the private key known to the public, an attacker can easily spoof any HTTPS certificate and systems that are infected with Superfish will just trust it. The user will have no idea that they are visiting a fake phishing website.

Since this discovery was made, Lenovo has released a statement saying that Superfish was installed on some systems that shipped between September and December of 2014. They claim that server-side interactions have been disabled since January, which disables Superfish. They have no plans to pre-load Superfish on any new systems.

Ars technica is reporting on the ruling from the FTC about the software shenanigans of Kmart and Sears. The marketing geniuses behind the parent company of Sears and Kmart decided they needed more information about the users of their website. Their solution? Offering $10 to users who install their custom software which phones home with data on just about everything they do on their computer. Not content with just browsing habits of webites, the software apparently recorded everything the user did online, including secure sessions. Under the settlement (PDF) with the FTC, Sears says they will stop collecting data and promises to destroy any and all information they’ve collected so far. Selling what websites you’ve been to, how much money you have, which prescriptions you take and what products you’re interested in for the low low price of $10 seems like a bargain.

Philosecurity has an interview with [Matt Knox], a former coder for Direct Revenue, an adware company which was sued in 2006 by New York governor Eliot Spitzer. The interview contains some interesting details of how the adware code worked internally: it created a Browser Helper Object, then ensured that the Browser Helper Object stayed up by creating a poller to check every ten seconds and regenerate the Browser Helper Object if it had stopped running. The poller ingeniously masked itself partly by exploiting Windows’ Create Remote Thread function to run itself as a series of threads instead of as an executable.

The truly fascinating bit of the interview is how [Knox] defies your initial suspicion that he’s a complete scumbag; he started off writing spam filtering software, was hired by Direct Revenue to do traffic analysis, started writing tiny bits of code to improve the adware, and eventually wound up knee-deep in the code.  [Knox] notes that you can get ordinary people to do incredibly distasteful things if you break those things into small enough chunks and introduce them gradually.