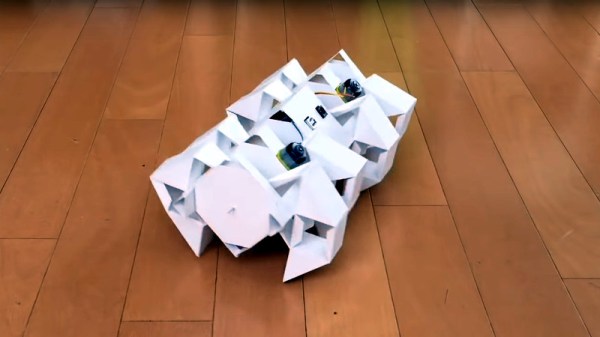 Most readers will be familiar with the work of the Dutch artist Theo Jansen, whose Strandbeest wind-powered mechanical walking sculptures prowl the beaches of the Netherlands. The Jansen linkage provides a method of making machines with a curious but efficient walking gait from a rotational input, and has been enthusiastically copied on everything from desktop toys to bicycles.

One might think that a Jansen linkage would be beyond some materials, and you might be surprised to see a paper one. Step forward [Luis Craft] then, with a paper walking Strandbeest. Designed in Blender, cut on a desktop CNC paper cutter, and driven by a pair of small robots linked to an Arduino and controlled by a Bluetooth link, it has four sets of legs and can push around desktop items. We wouldn’t have thought it possible, but there it is.

He claims that it’s an origami Strandbeest, but we’re not so sure. We’re not papercraft experts here at Hackaday, but when we put on our pedantic hat, we insist that origami must be made of folded paper in the Japanese style rather than the cut-and-glue used here. This doesn’t detract from the quality of the work though, as you can see in the video below.

We think this is the first paper Strandbeest we’ve seen, but we’ve brought you countless others over the years. Here’s [Jansen]’s latest, wave-like take on the idea.

END_OF_DOCUMENT_TOKEN_TO_BE_REPLACED

[Theo Jansen] has come up with an intriguing wind-powered strandbeest which races along the beach with surprising speed and grace. According to [Jansen], it “doesn’t have hinging joints like the classical strandbeests, so they don’t get sand in their joints and you don’t have to lubricate them.” It’s called UMINAMI, which appropriately means “ocean wave” in Japanese.

There are only videos of it in action to go on so far, but a lot can be gleaned from them. To make it easier to keep track of just a single leg, we’ve slowed things down and reddened one of them in the banner animation. Those legs seem to be providing a push but the forward motion is more likely supplied by the sails. The second video below shows it being pulled along by the type of strandbeest we’re all more used to seeing.

What follows is an analysis and best guess about how it works. Or you can just enjoy its graceful undulations in the videos below.

END_OF_DOCUMENT_TOKEN_TO_BE_REPLACED 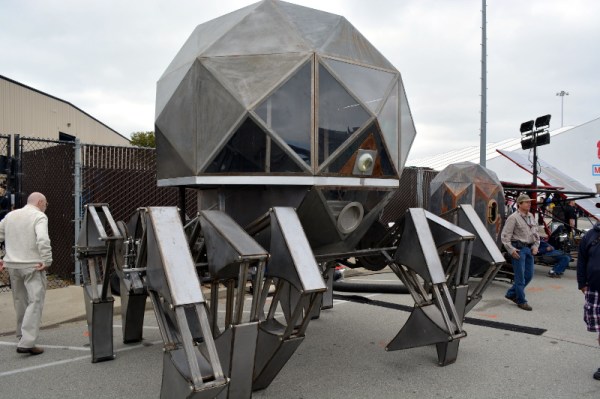 END_OF_DOCUMENT_TOKEN_TO_BE_REPLACED

About a year ago, a member of my family sent me a video featuring [Theo Jansen’s] StrandBeest, knowing that I was interested in all kinds of wacky and hackish inventions. My initial reaction was something to the effect of “wow that’s a neat device, but that guy is a little crazy.” For better or worse, the idea that this was an incredible invention turned over in my head for some time. Eventually, I decided that I needed to build one myself.  Apparently I’m a little crazy as well.

Theo’s original beest runs on a complicated linkage system powered by wind. He was nice enough to publish the linkage lengths or “eleven holy numbers,” as he calls him at the bottom of this page. He doesn’t, however, really explain how the connections on his PVC power transmission system work, so I was left to try to figure it out from his videos.  As you’ll see from build details and video to follow, this isn’t trivial. Keep reading past the jump to learn the adversity that I encountered, and how it was overcome in the end.

END_OF_DOCUMENT_TOKEN_TO_BE_REPLACED Do you have a heavy kitchen table? Wish you could move it all by yourself? [Ekaggrat] set out to design one for this year’s Beijing Design Week back in September.

It’s based off of the awesome Strandbeest design by [Theo Jansen], and it looks great. [Ekaggrat] made several prototypes of the “Crab Table” out of ABS plastic, and was planning to make a full size one using bamboo rods, which were the theme of the design week. Unfortunately the team ran out of time and was not able to make the full scale model. The prototypes walk around all by themselves with geared DC motors, but the plan for the full size one was to simply be able to push it.

We’ve seen lots of walking tables before, but there’s just something about the mechanical beauty of this design that we love. It’d be heavy — but imagine it in chrome! Maybe just the plastic could be plated… Stick around after the break to see it scuttle about!

END_OF_DOCUMENT_TOKEN_TO_BE_REPLACED We love the look, and most especially the gait, of [Theo Jansen’s] walker designs. We don’t fully understand them or the math behind them. But that could change if we spend enough time studying [Aaron Birenboim’s] body of work. He wants to incorporate the legs in a project so he’s been trying to optimize the Jansen leg design.

The calculations are delivered in a source code package available from his site. To make heads or trails out of the numbers you need a way to visualize them. He has provided that as well in the form of a MATLAB script which shows leg piece design and can even spit out an animated .gif file of the virtual legs in motion.

If you have no idea what we’re talking about make sure to check out [Jansen’s] original creations. We’re also excited to read more about the Klann and Ghassaei linkage designs which [Aaron] talks about in his post. Who doesn’t love a 12-legged robot, especially if you can ride it around work? You can watch this one running around the patio with rider perched atop it. The machine translation is a bit crude, but it seem this is based on the wicked walking sculptures of [Theo Jansen]. The rider can shift their center of gravity to control the walker, much like a Segway. We’d bet this makes for a rough ride on anything but a smooth level surface, but we’re fine with indoor use only. After all, you’ll need to be close to a charging station as this boasts 45 minutes of juice when transporting a 165 pound operator. See it scurry after the break.