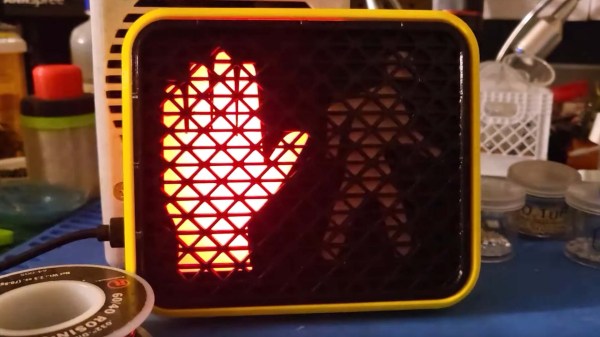 There’s just something so pleasing about scaled-down electronic replicas, and this adorable 3D printed pedestrian crossing light by [sjm4306] is no exception.

Although a little smaller than its real-world counterpart, the bright yellow housing and illuminated indicators on this pedestrian lamp are instantly recognizable due to their ubiquitous use throughout the United States. The handful of printed parts are held together using friction alone, which makes assembly a literal snap. The ‘safety grill’ with its many angles ended up being one of the most tedious parts of the build process, but the effort was definitely justified, as it just wouldn’t look right without it.

A suitably minuscule ATtiny85 drives a pair of LED strips that effectively mimic the familiar symbols for ‘Walk’ and ‘Don’t Walk’. [sjm4306] has designed the board and case in such a way to accommodate a variety of options. For example, there’s just enough room to squeeze in a thin battery, should you want to power this contraption on-the-go. If you don’t have an ATtiny85 on hand, the board also supports an ATmega328p or even an ESP8266.

All the build details are available over on Hackaday.io. While it’s billed as a ‘night light’, we think this could be an awesome platform for an office toy, similar to this office status light project. Or if you’ve somehow already got your hands on a full-size pedestrian lamp, why not hook it up to the Internet?

END_OF_DOCUMENT_TOKEN_TO_BE_REPLACED 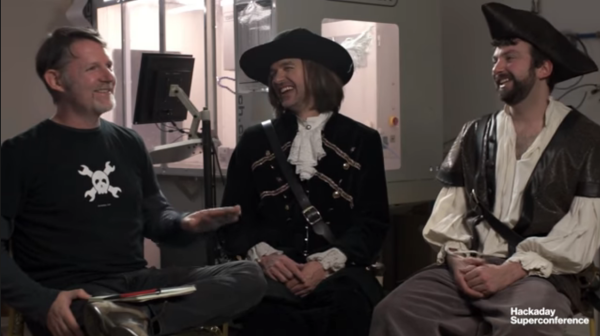 Mike Ossmann and Dominic Spill have been at the forefront of the recent wave of software-defined radio (SDR) hacking. Mike is the hardware guy, and his radio designs helped bring Bluetooth and ISM-band to the masses. Dominic is the software guy who makes sure that all this gear is actually usable. The HackRF SDR is still one of the best cheap choices if you need an SDR that can transmit and receive.

So what are these two doing on stage giving a talk about IR communication? Can you really turn traffic lights green by blinking lights? And can you spoof a TV remote with a cardboard cutout, a bicycle wheel, and a sparkler? What does IR have to do with pirates, and why are these two dressed up as buccaneers? Watch our video interview and find out, or watch the full talk for all of the juicy details.

END_OF_DOCUMENT_TOKEN_TO_BE_REPLACED 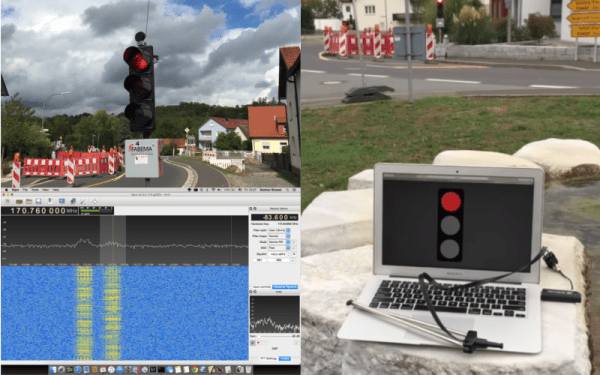 Construction crews tearing up the street to lay new internet fiber optic cable created a unique opportunity for [Bastian Bloessl]. The workers brought two mobile traffic lights to help keep the road safe while they worked. [Bastian] had heard that these lights use the 2 meter band radios, so he grabbed his RTL-SDR USB stick and started hacking. Mobile traffic lights are becoming more common in Europe. They can be controlled by a clock, traffic volume via an on-board camera, wire or radio. They also transmit status data, which is what [Bastian] was hoping to receive.

A quick scan with GQRX revealed a strong signal on 170.760 MHz. Using baudline and audacity, [Bastian] was able to determine that Audio Frequency Shift Keying was used to modulate the data. He created a simple receiver chain in GNU radio, and was greeted with a solid data stream from the lights. By watching the lights and looking at the data frames, [Bastian] was able to determine which bits contained the current light status. A quickly knocked up web interface allowed him to display the traffic light status in real-time.

It’s a bit scary that the data was sent in plaintext, however this is just status data. We hope that any command data is sent encrypted through a more secure channel.