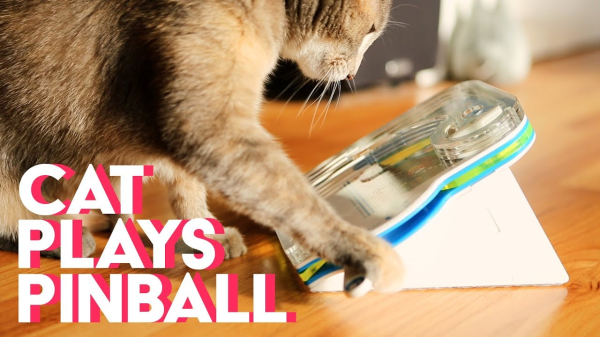 It’s pretty easy to train a dog to do things for treats. They’re eager to please. But a cat? Most cats have better things to do than learn tricks no matter how many treats are involved. But if you make an autonomous game out of learning a trick, they just might go for it.

That’s the idea behind Touchy Fishy, a pinball machine for cats. It’s the newest iteration of treat-dispensing machines that [Kim] made for his cat, MIDI. The previous version was shaped like a dog’s head with a joystick for a nose. MIDI was so adept at pulling the joystick toward herself that [Kim] decided to try a new design using a lever.

Humans like challenges, too, and [Kim] wanted to make something purely mechanical this time around. The final product is mostly springs and laser-cut acrylic. MIDI pulls the spring-loaded lever downward, launching a pinball upward in an arc. At the top of its trajectory is a spinner enclosed in a circle. When the pinball hits the spinner, it sweeps a treat toward an opening, and the treat falls down where MIDI can eat it. The best part? The spinner also returns the captive pinball to its starting point, so MIDI can play until [Kim] gets tired of dropping treats into the hole. Watch MIDI claw her way to the high score after the break.

Most of the cat-related projects we’ve seen were built to keep hungry cats from sitting on their owner’s chests at 3AM, demanding to be fed. Here’s one that goes a step further by putting the cat to work collecting wiffle balls which it uses to pay for small amounts of kibble.