So you manged to get a great deal on a fake tree during the after Christmas sales, but what should you do with your old one? If it was lighted with fiber optics you can reuse the strands to create your own star map. [Mr Trick] shows how to disassemble one of these trees, grouping the fibers by length. He built a wood frame, then covered it with a layer of cardboard and another of black fabric. From there the painstaking process of routing the fibers in a way to looks convincing starts.[Mr Trick’s] final product uses multiple LED light sources and even includes RF control.

Think this project is large and time-consuming? Check out the same idea built into a bedroom ceiling. 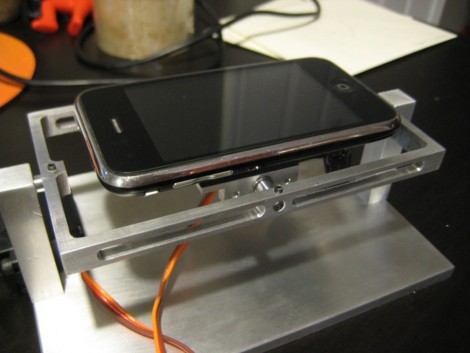 Here’s a mounting system that adds mechanical tilt control to the iPhone (link dead, try the Internet Archive version). It uses two servo motors to rotate along the X and Y axes. An analog joystick is used along with an Arduino to control the movement of the apparatus. As you can see in the video after the break, this works quite well when playing accelerometer-based games. But adding a joystick isn’t the end-goal of the project. [Shane] plans to point a camera at the iPhone and use image recognition to play games automatically. That sounds like a big bite the chew but we’ve seen this work with Guitar Hero so we’re optimistic.

END_OF_DOCUMENT_TOKEN_TO_BE_REPLACED

As he does every year, [Joe Grand] gave a talk explaining the development process for Defcon 18 badges. We looked in on these when details started trickling out back in July. They feature a neat bit of tech in the form of an LCD that acts much like ePaper. It doesn’t take any electricity to hold the image, only to change the display. This is a valuable feature for a battery powered device and allowed him to get about 9 days of juice out of a CR2032. This year’s badges also used laser-etched Aluminum as a substrate.

We’ve embedded the talk after the break and found it interesting enough to watch the entire hour. If you’re more interested in the hacks that came out of the badge, we’ve put together a playlist of videos [Joe] took while at the conference.

END_OF_DOCUMENT_TOKEN_TO_BE_REPLACED [Chris] was unhappy with the battery performance of his Rovio. It seems that he’s not alone, so he set out to reverse engineer the battery charging circuit to see if there was a fix. Boy is there, what he found is the diode above, apparently installed backwards when compared to the silk screen diode symbol. Now it’s entirely possible that the silk screen is wrong and this was fixed during assembly. We think that’s unlikely because if the closer of the two diodes was supposed to have the same polarity as the one next to it there should have been room to install them both in exactly the same orientation. [Chris] pulled out a soldering iron and changed the diode to match the silk screen. That fixed his problem and he’s now getting better performance than he ever has.

[From our comments section] CES is a time for showcasing the latest and greatest innovative products. While the crowd milled around the iLounge there was one company who stood out amongst the rest. [Mike] from CableJive is making his debut on the biggest stage for innovation this year. Many of you will remember [Mike] from a post back in 2006, where he was fed up of with all of the good docks being for the apple products exclusively. He set out to fix this and, when talking with him, attributes his success to the coverage Hack a Day did on his project. CableJive has become so popular that he has hired staff that help him produce his products. All detailed information for their products can be found at their website.  The finished product is displayed after the break.

END_OF_DOCUMENT_TOKEN_TO_BE_REPLACED A fresh pot of coffee is never more than a tweet away with the Tweet-a-Pot. It works in much the same way that our Troll Sniffing Rat does. For that build we used a Python script to monitor our comments, and this does the same except that the script read tweets through the Twitter API. It watches for a specific hash tag (#driptwit) and when found it sends a serial command to an Arduino. The microcontroller then writes a digital pin high to actuate a relay, powering up the coffee maker.

Sure, you have to preload the pot with grounds and water, but what do you expect, automatic coffee roasting and brewing? That’s quite a bit more work.