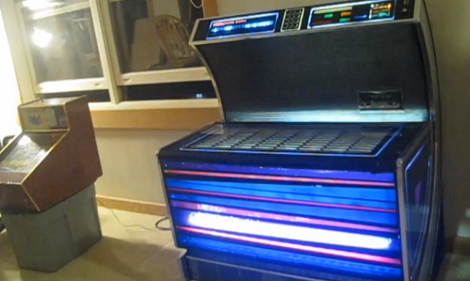 [Jim] just finished restoring an old Seeburg USC1 jukebox for his father using an Arduino, replacing an electromechanical rats nest of wires. The stack of 45 records were replaced with an Arduino Mega 2560 with an Sparkfun MP3 player shield, and he jukebox lights are now controlled with 74595 shift registers. Because his jukebox isn’t taking in money, the dollar bill validator has been modified into a ‘skip song’ button, and when there are no songs in the jukebox queue, there are 500 additional songs on the SD card that will randomly play.

We’ve seen one of [Jim]’s builds before. Earlier this year he repaired a thirty year old Pachinko machine using the same Arduino + MP3 shield setup. It looks like [Jim] is pretty skilled at revitalizing bulky old electronics. The jukebox restoration is great and has a lot more class than the internet-connected touch screen monstrosities that we still pump money into.

Check out the video after the break for a walk through of this restoration.

END_OF_DOCUMENT_TOKEN_TO_BE_REPLACED

As a student of MIT, [Jed Storey] has access to a ton of machine tools, so he decided to build an electric longboard with hub motors by hand.  He wound up re-doing a lot of his project, so we can commiserate with him on the trials of R&D.

Inspired by the BWD scooter, [Jed]‘s longboard uses hub motors – the wheel is the motor. The rotors were fabricated in-house, and off-the-shelf stators were wound by [Jed] by hand. There’s a lot of work that went into this build, and the build log is really fascinating in this regard.

The board is controlled by a pistol-grip R/C controller that had been modified to include a dev board and an XBee. For power, an aluminum enclosure was fabricated, strapped underneath the deck, and filled with LiPo batteries. While the build is mostly done, [Jeb] is thinking about scrapping it and moving onto version 2, the HeavyBoard. Check out the video of the board in action. 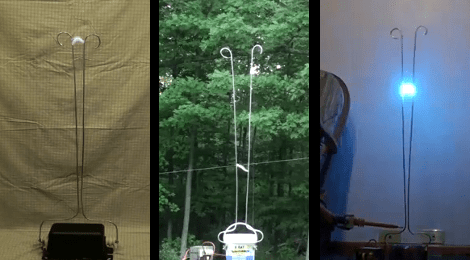 [Grenadier] has a thing for the high voltage and, as you can see, he’s found multiple ways to build the icon of HV toys – a Jacob’s Ladder.

The three look similar, but they use different means of generation the voltages necessary to get a spark to jump through the air. The exhibit on the left uses a neon sign transformer, the one in the middle is based on a transformer from an X-ray machine, and the example to the right uses a microwave oven transformer. [Grenadier] discusses the pros and cons of each method, then links to his in-depth posts about working with each one them. There are also videos for all three. We’ve embedded the video for the microwave oven transformer after the break. That version of the Jacob’s Ladder requires some way to start the spark and in the video he’s doing it manually. There is always the option to add a solenoid to do the job but he does mention that you can’t just let it run because that cheap transformer will burn out before long.

If you like what you see here, perhaps you’ll be entertained when he runs HV through some soda cans.

END_OF_DOCUMENT_TOKEN_TO_BE_REPLACED