Here’s one good thing about the bitter cold Midwestern winter, it helps keep you from overheating when working around a hot furnace. Back in February this iron pour happened in the parking lot of the Madison, Wisconsin based Sector67 Hackerspace. Look, they’re making iron hearts!

Now this isn’t just a bunch of members who got together and decided to do some casting. As you can tell in the video after the break the team knows what they’re doing. The event was a collaboration with FeLion Studios, a custom cast-iron art boutique. But the Hackerspace participants did get to take part in the process of building the cast, watching the pour, and cleaning up the rough results.

One of the people from FeLion Studios just appeared on the Martha Stuart Show, along with a 550 pound cast-iron frying pan United States map.  [Chris] from Sector67 tells us the New York frying pan that [Martha] is hold was a product of the parking lot pour.

END_OF_DOCUMENT_TOKEN_TO_BE_REPLACED 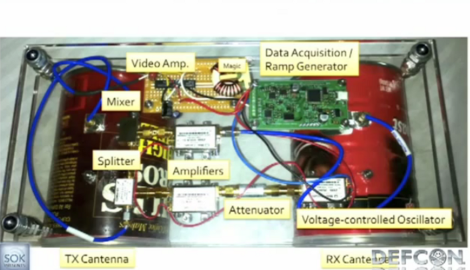 How we missed this one is anybody’s guess, but one of the presentations at DEFCON last year covers a DIY radar build. [Michael Scarito] talks about the concepts behind radar, and then goes on to show that it’s not too hard or expensive to build a setup of your own. We’ve embedded his 45 minute talk after the break.

The two large pieces of hardware above should look familiar. They’re descendents of a favorite hacking project, the cantenna. The can-based long-range antenna is most popular with WiFi applications, but we’ve seen it used for Bluetooth as well and it’s not surprising to see it here. The rest is a lot of sensing hardware and enough math crammed into the coding to make your ears droop.

If you make it far enough (exactly 39 minutes into the talk) [Michael] shares some links for more information on the build. We think living vicariously is enough for us, but if you manage to build your own setup don’t forget to post a project log!

END_OF_DOCUMENT_TOKEN_TO_BE_REPLACED

When [Josef Prusa] speaks at a conference extolling the virtues of 3D printing, he likes to give out printed objects to show off the possibilities home-brew fabrication. A favorite of [Prusa] are whistles – they’re functional and show off exactly what a 3D printer can do. Printing out hundreds of whistles is a job for a factory and not a printer, so [Prusa] decided to customize each whistle with the initials of a conference attendee.

When [Prusa] was asked to attend the INFOTRENDY conference in Bratislava, he had a small audience (only 150 people) and a list of all the attendees a week before hand. It was the perfect scenario to whip up a Python script to generate the models for a whistle with the initials of each attendee emblazoned on the side.

The WhistleGen code is up on [Prusa]’s GitHub ready to print out custom whistles for your next conference. While the capabilities of WhistleGen are limited to just two letters of text, we’re sure someone will figure out a way to automate the generation custom conference badges very shortly.

See the example he sent us after the break.

END_OF_DOCUMENT_TOKEN_TO_BE_REPLACED Yet another Fallout post here on Hackaday. This time, instead of the PIP-Boy, someone has built a fantastic prop for the iconic Nuka-Cola. The circuit is super simple, really just an LED array to light up the beverage just right. The construction of the base is quite nice though. If you’re a fan of functional props, or at least semi-functional (we doubt it tastes very refreshing), you’ll enjoy the build.

In case you’re wondering just what is in that bottle, it is basically just tonic water. For those who are unaware, tonic glows under UV light. [Kfklown] did add a few drops of paint to get the perfect color though. You’ll note that there are red and blue LEDs in the base as well as UV for color as well. [Michael Surran] just came across this video from his seventh grade science fair project. He really had some fun building and showing off the robot and we’re glad the footage wasn’t lost in the annals of time. Take a look at the clip after the break. That’s not a robot peeing, it’s the ‘fire defense unit’ that pumps liquid to put out very near-range fires. There’s a solar-powered fan on the front, and the claw will spin if you know how to activate it. The shoulders and base are also motorized, and it looks like the keypad from an early calculator gives some extra control on the back of the bot.

We can’t watch this without smiling, and it’s inspired us to launch a recurring feature on Hackaday. We want you to dig out and digitize your old footage. Anything hack-related is fair game… and don’t be bashful! It doesn’t necessarily have to be you either. For example, we loved the video of [Grace Hopper’s] nanosecond lecture. If you’ve got some old time footage send us a link to it!