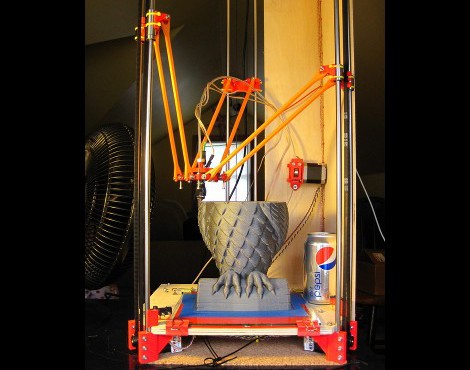 This 3d printing delta robot really seems to solve a lot of the hurdles faced by previous offerings. With other delta printers we’ve looked at the motor control of the three arms is usually a it complicated. On this build the motors can just be seen in this image at each corner under the build platform. Each motor has a belt that loops from the bottom to the top for the machine, driving an arm along two precision rods.

It’s also interesting to note that the printer head doesn’t have a motor mounted on it for feeding the filament. Instead, the motor is mounted remotely. You can see it above the soda can in this image. It feeds the filament through a hollow tube spanning the gap between the extruder and the motor. This acts as a Bowden cable. With less mass to move this may make it easier to control the location of the print head.

After the break you can catch a clip of the team showing off the speed and dexterity of the delta bot, followed by a printing demo.

END_OF_DOCUMENT_TOKEN_TO_BE_REPLACED END_OF_DOCUMENT_TOKEN_TO_BE_REPLACED

Over at the Albuquerque, NM hackerspace Quelab, [Alfred] needed to test a bunch of surface mount LEDs. He ended up building a pair of 3D printed tweezers with a pair of needles attached to the end and a space for a coin cell battery. It works and Quelab got a new tool.

[tech2077] added an FTDI chip to his Raspberry Pi to do a little single cable development. We’ve seen a few similar builds, but surprisingly nothing related to the on board display serial interface. This wiki page suggests Nevermind, but it would be cool to get a picture from a display plugged into that display port on the Raspi.

Over at the 23b hackerspace a few people were having trouble finding a good bike cargo rack that wasn’t overpriced. They built their own with $30 in materials and a salvaged milk crate. It looks great and is most likely a lot more durable than the Walmart model.

If that cargo rack fell off, it would look like this

Apparently you can get ‘spark cartridges’ to attach to the underside of a skateboard. [Jim] saw these would look really cool attached to his bike so he did the next best thing. He attached them to his sandals. It does look cool…

[YO2LDK] picked up a TV tuner dongle for software radio and found it overheated and stopped working after about 15 minutes (Romanian, Google Translate). He hacked up a heat sink from an old video card to solve this problem. Bonus: the noise was reduced by a few tenths of a dB. What good is a moat if nobody is guarding it? We suppose that depends on what beasties lurk beneath the surface of the water, but that’s neither here nor there. The members of LVL1 continue their quest to outdo each other in augmenting the building’s automated features. The latest offering is this security camera which is operated with an analog thumb stick.

These are the people who are building a moat (which the city things is a reflecting pool) in front of their main entrance. Now they will be able to see and sense if anyone is trying to get across the watery hazard. The hack marries an ultrasonic rangefinder and camera module with a pair of servo motors. The brackets for the motors allow a full range of motion, and the signal is translated by an Arduino and Video Experimenter shield to put out a composite video signal. That’s not going to make streaming all that easy, but we’re sure that is just one more hack away.

This laser light painting setup can even control the camera. But it probably will not work with your average point-and-shoot. The exposure time used is somewhere around 2 seconds long, a feature which is hard to find on anything but DSLR cameras.

The setup relies on a red laser diode to do the painting. When viewed in real time you only see a dot tracing out a cryptic pattern and occasionally switching on and off. But with a long exposure the intense light persists to achieve an image like the one seen above. Note the ghosting around the rig as it has moved while the shutter was open.

The Arduino controlled device consists of a base which pivots the diode horizontally, with a servo for aiming on the vertical axis. Since the sketch is divided up by letter, we wonder how hard it would be to adapt this for use with a point-and-shoot? Perhaps you could capture one letter at a time and layer the frames in post production?

It seems this is a lot easier to build than some of the LED plotters we’ve looked at. If you do make your own don’t forget to send a link our way.

END_OF_DOCUMENT_TOKEN_TO_BE_REPLACED [Roy] had an extra garage door opener on hand and decided to put it to use as a remote control closing mechanism for his bedroom door. We gather he has some noisy housemates as the inspiration for the project came from not wanting to get out of bed to close the door when the ruckus interrupts his TV watching.

The image above shows the hinged system which translates the linear motion from the garage opener track to the rotational force necessary to swing the door closed. We’d say he really nailed it because the system matches the angle of the door jamb perfectly, and when the door is fully open the angle bracket is almost flat against the wall. We certainly don’t have the same need for closing doors, but the mechanism is something to keep in mind.

The motor for the opener is hidden beneath his desk. You won’t be able to see it in the video after the break because he built a matching enclosure around it. Now he just needs to add some WiFi connectivity and he can ditch the uni-tasking RF remote for a smart phone app.