Homebrew laser cutters are nifty devices, but scorching your pals, burning the house down, or smelling up the neighborhood isn’t anyone’s idea of a great time. Lets face it. A 60-watt laser that can cut plastics offers far more trouble than even the crankiest 3D-printers (unless, of course, our 3D printed spaghetti comes to life and decides to terrorize the neighborhood). Sure, a laser’s focused beam is usually pointed in the right direction while cutting, but even an unfocused beam that reflects off a shiny material can start fires. What’s more, since most materials burn, rather than simply melt, a host of awful fumes spew from every cut.

Despite the danger, the temptation to build one is irresistible. With tubes, power supplies, and water coolers now in abundance from overseas re-sellers, the parts are just a PayPal-push away from landing on our doorsteps. We’ve also seen a host of exciting builds come together on the dining room table. Our table could be riddled with laser parts too! After combing through countless laser build logs, I’ve yet to encounter the definitive guide that tells us how to take the proper first steps forward in keeping ourselves safe while building our own laser cutter. Perhaps that knowledge is implicit to the community, scattered on forums; or perhaps it’s learned by each brave designer on their own from one-too-many close calls. Neither of these options seems fair to the laser newb, so I decided to lay down the law here.

First off, a quick disclaimer: even if you follow this guide to the nose, we can’t guarantee that you wont see trouble down the road. These safety tips make you safer, wiser, but not invulnerable. Fellow grasshopper, proceed at your own risk.

Shields Up: Protecting Your Last Set of Eyeballs

By the time we emerge from the garage with our finished laser cutter, we’re hoping to have the same number of working eyeballs that we started with. From my personal list of Implicit Rules of After-Hours Engineering, arrives almighty rule number 1: Thou shalt not injure thyself nor thy pals whilst after-hours hacking 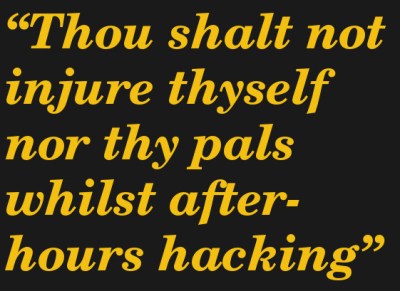 Staying true to this tome means taking the right steps not to permanently injure anyone in the vicinity of the workspace. For me, this meant working in the enclosed garage and picking up a few extra pairs of safety glasses. Eye-damage in a fraction of a second is no joke, so let’s make sure we’re picking up the right type. For this project, the general consensus on forums is a pair of safety glasses with an OD 6+ rating.

A lens’ OD rating refers to just how much light is transmitted by the time it exits out the other end of the lens. Every digit increase represents a drop in the order of magnitude of transmitted light, so an OD 6+ rating will transmit less than 0.0001% of the input light at the specified wavelength. Keep in mind, though, that we’re building a laser cutter. Like other plastics, a focused beam will have no problems getting through these glasses. These lenses will keep us safe from reflections and the uncollimated lens that travels from mirror to mirror, but they’re not impervious to being cut by the focused beam.

Once our laser cutter is fully assembled, we’ll still need to run some calibration before it’s ready to start making cuts. To get there, we’ll need to align the mirrors. Behold–here lies our first chance to bounce the beam away from it’s expected target and toast a nice hole in the wall. To avoid taking our chances, the laser cutter must operate in a fully enclosed environment.

Fully-enclosed, you say? Just what sort of enclosure can take this kind of heat?

Of course, we could cover our marvelous gantry and optics behind sheet metal to cover up our magnificent work; but, from all of us who grew up bedazzled whilst watching our 3D printers squirt, we know that’s no fun. Fortunately–we’re in luck! Rather than hide our work behind a metal enclosure, we have some translucent options. Digging into the details brings me to my second Almighty Rule of After-Hours Engineering, adopted from the wisdom of [Mike] at mikeselectricstuff: Know thine enemy.

In this case, our biggest foe is a 60-watt, 10,600-nanometer CO2 laser tube sourced from overseas. With a bit of reading, it turns out that 10,600 nanometers happens to be opaque to some materials that are translucent to visible light; among them: soon-to-be-our-best-friend, Acrylic. This little fact is a golden one. It means that an acrylic enclosure offers us all the benefits of beam stop while giving us a visible window into the laser while it’s making cuts.

A brief aside: that acrylic cuts so well under a focused CO2 beam is a consequence of the fact that it absorbs, rather than transmits, the light traveling into it. It’s also why Acrylic is so effective as a beam-stop for an unfocused beam or minor reflections. Of course, we’re not impervious with an acrylic case, but we’ll certainly smell trouble before the beam gets out of its enclosure.

One final note: While acrylic works so well as a beam stop, it’s still not a great idea to stare at the workpiece while cutting. The part receiving the cut tends to fluoresce with bright light that’s definitely in the visible spectrum. While there’s no laser light coming through the acrylic window, bright visible light won’t have any trouble getting through and making our eyes sore.

About a year ago, I bumped into fellow who retrofitted an old Chinese laser cutter with updated electronics, giving himself a nicely working system for about $1000. Not a bad way to go, I thought. But as someone who had been dying to build their own from scratch, I was riddled with questions. The biggest topic on my mind: fume extraction… better known as: how-to-not-die from breathing the stuff you’re cutting.

“Ah,” he said, giving me a sly stare. “Have you looked into hydroponics lately?” Hydroponics, I thought. What on earth would hydroponics enthusiasts want anything to do with fume extraction? He leaned in.

“Well it turns out that the folks selling hydroponics equipment quickly realized that their fellow enthusiasts didn’t want the neighbors getting a whiff of the plant life sprouting in their garage, so they started selling budget carbon filters and can fans for ventilation.” Who knew, I wondered, but it turns out: he was right. A few months later, I had myself a carbon filter and two can fans to ventilate the soot out of the laser bed before redirecting the filtered exhaust out the window. Oddly enough, it shipped with a complimentary lighter. Go figure. Nevertheless, I could call my fume-extraction problem: a problem solved.

At this point, we’ve got ourselves a nifty enclosure, a shiny new pair of safety glasses, and even a nice carbon filter to boot; so we’re probably feeling pretty safe at this point. Before we get too comfy, though, consider this: just how safe is our laser cutter if we remove the panels or open the lid whilst cutting? Hopefully, you’re thinking what I’m thinking: not safe at all! To remedy this issue, we need some form of failsafe or built-in emergency stop to kill power to anything that our enclosure protects us from. In this case, for any instance that we might have in opening the lid or panels that enclose the cutting area, the laser needs to turn off.

Making this concept come true is actually dead simple. For any panel that can come off, I installed a momentary switch that’s normally-open. When the panels are installed, the switch is pressed, closing it. By wiring each of these switches in series, and connecting them to a solid-state relay that interrupts the laser power supply, any moment when the panels are removed means the laser will shut itself off too.

It’s nifty. More importantly, though, it’s simple. As with most safety systems, the simpler, the more reliable.

Like many of us out there, I find the temptation to build something out of my comfort zone irresistible. Nevertheless, all projects have a learning curve, and for those that can hurt you or your pals I urge you to educate yourself. Become the expert from what you read and do, and relish the learning feedback of making mistakes.

But don’t rush. Building the laser cutter might be one feat, but the journey towards becoming the expert means every moment along the way is worth our while as we learn something new. Who knows? Maybe in a few years, we’ll be the local hackerspace laser guru, happy to run our fingers through greying hair while giving safety advice for younger hackers’ hair-brained schemes.

I’ve hit some of the practical high-points for safe laser cutter builds, but don’t let this document be your stopping point. For the curious, here’s a couple more places to find additional pro-tips:

50 thoughts on “Taming The Beast: Pro-Tips For Designing A Safe Homebrew Laser Cutter”