That was something like 40 years ago now, and the blood distribution network has surely benefited greatly from the computer revolution, no doubt resulting in much-improved prediction of where and when blood will be needed. As a result, blood relays are probably not as common as they once were.

But in developing nations, and in less densely populated areas of countries like the USA, medical resources are spread thin. And when an hour can make the difference between life and death, there’s bound to be innovation. That’s why Zipline, a drone delivery startup, has targeted rapid medical deliveries by drone as an area for commercialization. And in doing so, they just may have found a great use case for autonomous aerial deliveries.

Forget the glitzy Amazon and Google drone delivery demos. This isn’t buying a Kindle Fire and bag of popcorn and having a quadcopter land in your invitingly capacious and obstacle-free backyard thirty minutes later. Zipline’s innovation is in the use of fixed-wing drones that bear a passing resemblance to such cargo planes as the C-119 Flying Boxcar or the C-82 Packet. The drone has a generous cargo compartment, full GPS and autopilot, and can be launched from austere facilities with the help of a catapult. 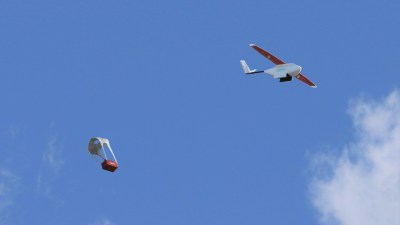 Off-loading the drone’s cargo is — unconventional. Rather than adopt Amazon’s model of designated landing zones for cargo quads, Zipline parachutes the cargo down to the ground from a loitering pattern above the recipient. This obviously has limitations — no Fabergé eggs from eBay. But for certain properly packaged cargos like medical supplies, it’s a workable model.

The scheme is probably not suitable for urban or even suburban areas, since a fairly large target area free from obstructions is needed. In that way, Zipline suffers from the same geographic restrictions that Amazon’s drones do. But not having to land the drone at the recipient site is a big advantage — no dust, no noise, less chance of accidents, and faster turnaround.

It all may sound fanciful, but Zipline is actually doing this regularly, right now. They’ve been working in the African nation of Rwanda since October, reducing their system to practice. From a base in Muhanga, a fleet of eight Zipline drones has been making drops to far-flung medical centers that would take hours to reach by truck, if at all. By this summer they intend to support a network of twenty hospitals with 15 drones, making regular drops of medicines, blood, and supplies that can make a difference in the health of millions of Rwandans.

To me, Zipline’s model makes far more sense than Amazon or any of the other proposed aerial delivery services. Putting aside for a moment the triviality of delivering a bunch of sunscreen to conference attendees compared to getting a liter of blood to a dying patient,  the need to land a powerful quadcopter safely in a suburban or even rural neighborhood seems like a huge obstacle to overcome. Watch any of the rotor-wing drone delivery videos and you’ll notice that the “time over target” is huge, at least relative to the total travel time. The Zipline deliveries are quick — fly, bomb, and scoot. As the drones develop, we might even see multiple payloads in a single drone, each dropped to different sites. As the Zipline CTO points out, “Landing doesn’t scale.” Air drops do scale, and might let Zipline achieve hundreds of deliveries a day.

Add in the fact that fixed-wing aircraft can be faster, carry larger payloads for a given fuel load, and are far simpler to build and maintain than rotor-wing drones, and I think Zipline might be onto something here. It’ll be interesting to see how their experience in Rwanda this summer alters their model, but in the end this could be a real boon to rural medicine in developing nations. And how ironic would it be if delivering lifesaving supplies ended up being the killer app for aerial drone deliveries?

Read more from this series:
Automate the Freight

26 thoughts on “Automate The Freight: Medical Deliveries By Drone”