Winter NAMM is the world’s largest trade show for musical instrument makers. It is a gear head’s paradise, filled to the brim with guitars, synths, amps, MIDI controllers, an impossibly loud section filled with drums, ukuleles, and all sorts of electronic noisemakers that generate bleeps and bloops. Think of it as CES, only with products people want to buy. We’re reporting no one has yet stuffed Alexa into a guitar pedal, by the way.

As with all trade shows, the newest gear is out, and it’s full of tech that will make your head spin. NAMM is the expression of an entire industry, and with that comes technical innovation. What was the coolest, newest stuff at NAMM? And what can hackers learn from big industry? There’s some cool stuff here, and a surprising amount we can use.

A few years back, Korg announced the NuTube, most likely the first new design of a vacuum tube in several decades. The NuTube 6P1 is a dual triode meant for preamp applications and can be seen as a very, very low power 12AX7. The technology behind the NuTube is the same as vacuum fluorescent displays, and even though you can use VFDs as tube amplifiers, this is a purpose-built tube designed for modern, low-power applications. 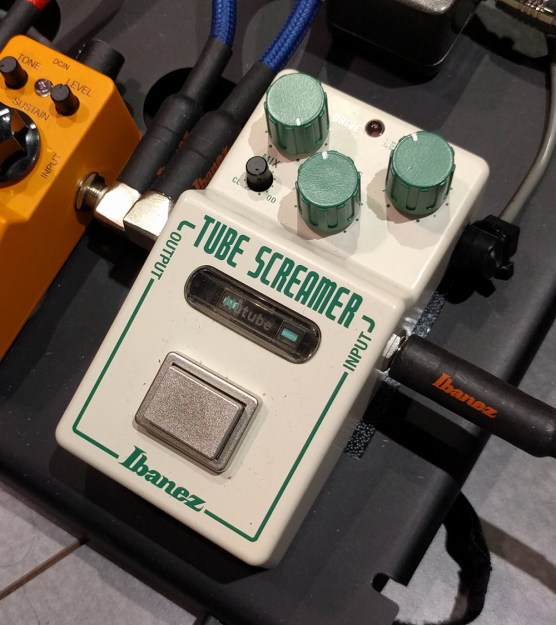 In the years since the NuTube has found its way into the new Vox Continental organ, but now we’re seeing novel applications of this fairly new, somewhat ancient technology. It’s in a guitar pedal. A Tube Screamer, specifically.

The Tube Screamer is a family of guitar pedals going back thirty years, and the circuit is fairly simple: take an op-amp, put some silicon clipping diodes in the feedback of the op-amp, and put it in a green box. The new tube-based Tube Screamer still uses an op-amp, but replaces the silicon clipping diodes with the NuTube. The dual triode NuTube is wired up with each half anti-parallel to ground in the feedback loop of the op-amp. The result? Well, given the demos released so far and what the people on the Internet say, this just sounds like a normal Tube Screamer. The blue lights in the NuTube do fade in and out depending on how hard you’re playing, so that’s cool, I guess.

Miniaturization in the guitar cable 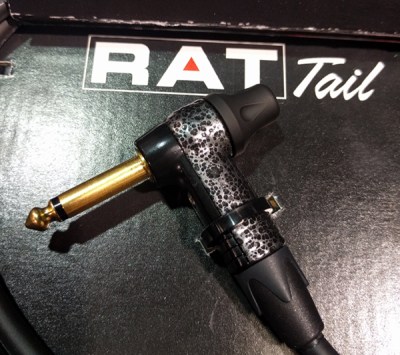 The ProCo RAT is an op-amp (an LM308 for the tone snobs) with some clipping diodes in the feedback loop. If you’re noticing a pattern here, you too can design guitar effects. The RAT sounds great, but there’s always room for improvement, right?

Introducing the RAT Tail. It’s a guitar cable with a little bit of microcircuitry built into one plug. Effectively, you’re looking at a right-angle 1/4″ jack with a three-position rotary switch on it. Position one is bypass, position two is the classic RAT sound with unity gain, and position three adds +3dB of boost. It’s powered by two coin cells, and I couldn’t manage to open up the display item for a look at the guts inside. Is the RAT Tail useful? It’s not a terrible idea, and the company behind this also has a version with just a pot in the interesting end of a cable — that’s a cable with an integrated volume knob and a great idea.

Euroracks are everywhere and it’s awesome

Modular synths have been around since the beginning of synthesis, but only recently has the popular Eurorack format caught on. The DIY synth community has glommed onto this format designed to fit in a 3U rack (kinda, they’re 3 x 1.75″ tall, at least). You can find Eurorack synth modules on Tindie, elsewhere on the web, and even guitar pedal manufacturers are cashing in on this fantastic opportunity.

On tap are handpainted modules from Zvex, and they’re beautiful works of art that sound good, too. Arturia is getting in on the Eurorack game with the RackBrute, a case for your Eurorack modules that conveniently attaches to their MiniBrute synth. Even Moog is slowly releasing a few Eurorack-compatible synths. These aren’t modules — they’re entire synths — but I’m sure there’s a bit of institutional inertia at Moog against the Eurorack format. The market is going towards Eurorack, people. Bucking the trend, it should be noted that JHS is manufacturing 500-series modules, a format incompatible with the Eurorack standard.

With all those pretty Eurorack modules, you have to wonder where these companies get their front panels manufactured. It appears there are very few companies doing it. Metalphoto of Cincinnati was at NAMM, and if you want pieces of aluminum drilled and labeled, this would be a place to check out. They’re using a photo process to anodize aluminum, and they can do multiple processes. In the panel below, you can see one with black, red, green and blue anodization. That’s very cool, probably pricey if you’re not doing it in quantity, but adds a nice finish to any electronics project.

The solution to spinny knobs

Here’s an interesting product if you don’t want the knobs on your amp or pedals to turn accidentally. Loknob is a knob for a standard potentiometer that prevents you from bumping the knob and changing your settings. It’s basically a toothed washer that screws down to the pot, and a knob with a toothed bottom on a spring retainer. The pictures do it justice. There were a few other products, like a device to increase the force needed to turn a pot, and a nut that completely covers the ‘turny’ bit of a pot.

Again, the most important thing is IP

Here’s a business lesson for you. Whatever you design, it’s worthless. IP, trademarks, and patents are the only thing that can make money. This is a case study on why your marketing team is worth at least as much as your engineering team.

The musical instrument industry has seen a continuing trend of resurrected brands over the last two decades. This arguably began with Danelectro, a manufacturer of guitars and amplifiers in the 1950s and 60s that was defunct by 1970 and was reborn by the Evets Corporation in the late 90s. The purchase of Danelectro by the Evets Corporation was simply buying the name and trademark — the guitars were simply spat out of a factory in Korea. Many other famous defunct brands have followed this pattern; Supro is now selling amps and guitars, because someone bought the name Supro (after Jack White made the brand famous again).

This year, one of the great vintage amplifier manufactures demoed their wares at NAMM. Magnatone was one of the first amplifier companies, back from the age where you could play Spanish or Hawaiian guitar. Like most musical instrument companies, the company disappeared in the late 1960s. The trademarks were abandoned until Ted Kornblum, marketing professional and MBA, albeit with significant experience in the industry, registered the Magnatone trademarks and recruited a team to rebuild the old Magnatone circuits with all the modern niceties such as a three-prong plug.

The result is an amp that is going on tour with Neil Young, ZZ Top, and Jeff Beck. Are these amps Magnatones? Well, yes, the name is right there, and it’s trademarked. There is no direct line of lineage between the amps sold at Sears in 1958 and the Magnatone amps sold in 2016. Moreover, you can’t patent or trademark a circuit, and all of the electronics for these old amps are well documented and understood; anyone can simply build and sell a cloned circuit from one of these resurrected manufacturers. Why then is Magnatone a success story? Because someone registered a trademark.

I hate to end this post on a low note, so here’s a harp guitar. Harp guitars are awesome.