While desktop computers have tons of computing power and storage, some small CPUs don’t have a lot of space to store things. What’s more is some CPUs don’t do multiplication and division very well. Same can be said for FPGAs. So suppose we are going to grab a bunch of three-digit decimal numbers from, say, a serial port. We want to store as many as we can, and we don’t want to do a lot of math because we can’t, it is slow, or perhaps it keeps our processor awake longer and we want to sleep to conserve power. We want a way to pack the numbers as close to the theoretical maximum as we can but with little or no math.

The simple approach is to store the numbers as ASCII. Great for processing since they are probably in ASCII already. If they aren’t, you just add 30 hex to each digit and you are done. That’s awful for storage space, though, since we can store 999 in 10 bits if it were binary and now we are using 24 bits! Storing in binary isn’t a good option, if you play by our rules, by the way. You need to multiply by 10 and 100 (or 10 twice) to get the encoding. Granted, you can change that to two shifts and an add (8x+2x=10x) but there’s no easy way to do the division you’ll have to do for the decode.

Of course, there’s no reason we can’t just store decimal digits. That’s call binary coded decimal or BCD and that has some advantages, too. It is pretty easy to do math on BCD numbers and you don’t get rounding problems. Some CPUs even have specific instructions for BCD manipulation. However, three digits will require 12 bits. That’s better than 24, we agree. But it isn’t as good as that theoretical maximum. After all, if you think about it, you could store 16 distinct codes in 4 bits, and we are storing only 10, so that 6 positions lost. Multiply that by 3 and you are wasting 18 codes.

But there is a way to hit that ten-bit target without doing any math. Its called DPD or densely packed decimal. You can convert three decimal digits into ten bits and then back again with no real math at all. You could implement it with a small lookup table or just do some very simple multiplexer-style logic which means it is cheap and easy to implement in software or onboard an FPGA.

END_OF_DOCUMENT_TOKEN_TO_BE_REPLACED 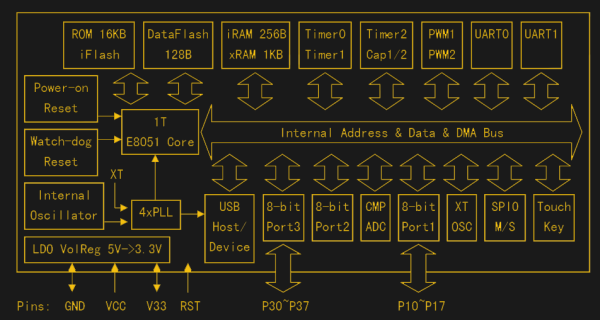 Last year, Jiangsu Yuheng Co., Ltd introduced a new microcontroller. The CH554 is a microcontroller with an E8051 core with a 24 MHz clock, a little more than 1 kB of RAM, and a bit more than 14 kB split between the code and data Flash. In short, it’s nothing too spectacular, but it makes up for that with peripherals. It’s got SPI and ADCs and PWM, UARTs, and even a few capacitive touch channels. It’s also a USB device, with some chips in the series able to function as a USB host. You can buy this chip for a quarter through the usual retailers.

Normally, this isn’t huge news. The 8051 is the most copied microcontroller on the planet, and there are probably billions produced each year. Cheap parts are only cheap if your time is free; you’ll usually spend ages trying to digest the datasheet and get a toolchain up and running. That’s where this chip is a little different. There are multiple efforts to bring an Open Source toolchain to this chip. And they’re doing it in Windows and Linux. Someone really cares about this chip.

The current best option for an SDK for this chip comes from Blinkinlabs, with a port of the CH554 SDK from Keil to SDCC. There are real, working code examples for this chip using an Open Source toolchain. Sure, it might just blink a LED, but it’s there. If you can blink a LED, you can do just about anything from there. Programming the chip happens over USB with the ‘official’ WCHISPTool (Windows) or LibreCH551 (command line). The end result is a completely Open Source toolchain to program and upload a hex file to a cheap chip.

There are a few more chips in the CH554 series, ranging from the CH551 in an SOP-16 package to the CH559 in an LQFP48 package, with more features available as the chips get bigger. It’s an interesting chip, with some somehow implementing a USB hub, and could be a very cool chip for some low-level USB hacking. 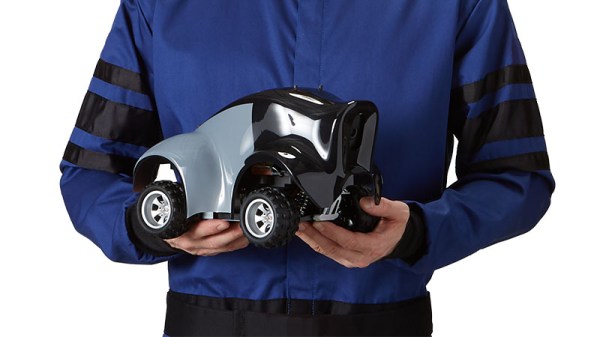 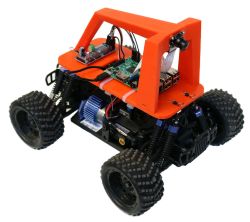