For all the successes of modern weather forecasting, where hurricanes, blizzards, and even notoriously unpredictable tornadoes are routinely detected before they strike, reliably predicting one aspect of nature’s fury has eluded us: earthquakes. The development of plate tectonic theory in the middle of the 20th century and the construction of a worldwide network of seismic sensors gave geologists the tools to understand how earthquakes happened, and even provided the tantalizing possibility of an accurate predictor of a coming quake. Such efforts had only limited success, though, and enough false alarms that most efforts to predict earthquakes were abandoned by the late 1990s or so.

It may turn out that scientists were looking in the wrong place for a reliable predictor of coming earthquakes. Some geologists and geophysicists have become convinced that instead of watching the twitches and spasms of the earth, the state of the skies above might be more fruitful. And they’re using the propagation of radio waves from both space and the ground to prove their point that the ionosphere does some interesting things before and after an earthquake strikes.

While records of the occurrence of earthquakes and their aftermath stretch far back into history, it’s only fairly recently that we’ve learned what actually causes the earth to shake. The geophysics are complicated, but the basics are easy to grasp: when vast tectonic plates floating on the molten rock of the Earth’s mantle move relative to each other at fault lines, friction causes them to stick together. Strain accumulates between them, and when the strain finally overcomes the frictional forces opposing it, the immense potential energy stored in the deformed rock is released, and the ground moves.

Early attempts at predicting earthquakes relied on everything from changing levels of water in wells to strange animal behavior, on the theory that precursor movements at a fault could result in infrasonic vibrations that animals were somehow picking up on. Geologists also tried to tease patterns out of the nearly constant stream of tremors and small earthquakes detected by their seismogram networks, correlating them to larger quakes after the fact. Despite decades of effort, none of this paid off.

It would take a major earthquake and a serendipitous observation by a scientist with a uniquely prepared mind to change the earthquake detection paradigm. After the catastrophic Tohoku earthquake, the magnitude 7.9 event that crippled the Fukushima-Daichi nuclear plant, caused a devastating tsunami, and claimed nearly 16,000 lives in March of 2011, most scientists were poring over seismographic data to learn more about the quake. But Professor Kosuke Heki of Hokkaido University in Japan had another thought: what if there had been changes to the ionosphere as a result of the earthquake?

Heki is an expert in space geodesy, the exploration of the Earth’s shape, position in shape, and gravitational field using mainly space-based systems. He knew that changes in the ionosphere can affect GPS and GNSS receivers on the ground, and with Japan’s vast network of receivers to keep track of the smallest of movements of the Earth’s crust, he was able to spot an anomalous buildup of electrons directly above the epicenter of the quake. What’s more, the buildup preceded the start of the quake by 40 minutes.

On the face of it, it seems a bit far-fetched that the ionosphere could somehow react to what’s happening deep within the Earth. But there turn out to be deep electrical connections between the Earth and the atmosphere. The key to understanding these connections is in the microfractures that occur in rock at faults that are about to rupture. The strain that builds up in rock at a geological fault is not released in a single event. Think of breaking a pencil by slowly bending it – the pencil bends at first, the paint starts to crack, you hear a faint crackling as wood fibers begin to burst, and then the pencil suddenly pops in two. Rock behaves very much the same way, if on a much different scale, and it’s the microfractures that occur before the main fracture that can power ionospheric disturbance.

The theory goes that chemical bonds in the mineral grains of the rock, specifically the peroxy bonds that occur between two oxygen atoms, are broken by microfractures. This leaves a charge imbalance, with one side of the peroxy bond with an excess of electrons, and the other side with a positive hole. These holes tend to migrate from high stress to unstressed areas of the rock, which leads them to eventually reach the surface, leaving it with a net positive charge. As stress in the rock below increases, the number of positive holes reaching the surface rapidly multiplies, drawing electrons from the atmosphere to balance the charge. The moving charges generate an enormous electromagnetic field that can reach all the way up to the ionosphere, creating just the kind of anomalies that Professor Heki observed.

Professor Heki has done extensive work since the Tohoku quake to improve his data and refine his model. He has mined historical records and reworked his calculations to satisfy his many vocal critics, but the geophysics community has yet to fully embrace his work. That’s understandable given the disappointment of previous attempts at earthquake prediction, but Heki is slowly winning over the skeptics, in part from the efforts of citizen scientists who have a keen interest in the state of the ionosphere and the means to study it: amateur radio operators.

For all the money amateur radio operators spend on gear, most of it is useless without the cooperation of the ionosphere. Making contact with someone beyond the line of sight relies on bouncing your signal off something, and more often than not, that something is the refractive layer of charged particles swarming a couple of hundred kilometers overhead. The layers of the ionosphere ebb and flow on a diurnal basis, primarily under the influence of ionizing radiation from the Sun. Hams are tuned into these cycles, and anything that alters the state of the ionosphere is a topic of considerable interest in radio circles.

Enter Alex Schwarz (VE7DXW), an amateur radio operator from Canada. In preparation for measuring propagation changes due to the 2017 solar eclipse that swept across North America, Schwarz built what he calls an “RF-Seismograph”. Using custom SDR software and a special down-converter tapped into the IF-stage of a shortwave receiver or ham transceiver, the RF-Seismograph monitors changes in wideband noise on the high-frequency (HF) bands that hams most often use for long-distance contacts via ionospheric skip. Multiple stations along the path of the eclipse monitored HF propagation, but unfortunately the expected changes in noise levels as the Moon’s shadow blotted out the ionizing radiation of the Sun were not seen.

It seemed like the RF-Seismograph was a bust, but Alex kept monitoring conditions, and a little more than a year later, a small earthquake struck off the coast of Vancouver Island. The 4.9-magnitude quake corresponded perfectly to a spike in the noise levels, suggesting that the ionosphere over the quake area was behaving as Dr. Heki predicted it would. Furthermore, the current solar minimum conditions that are frustrating hams the world over pretty much ruled out normal solar causes for the propagation change. It certainly looked as if the ionospheric changes were coming from the earthquake. 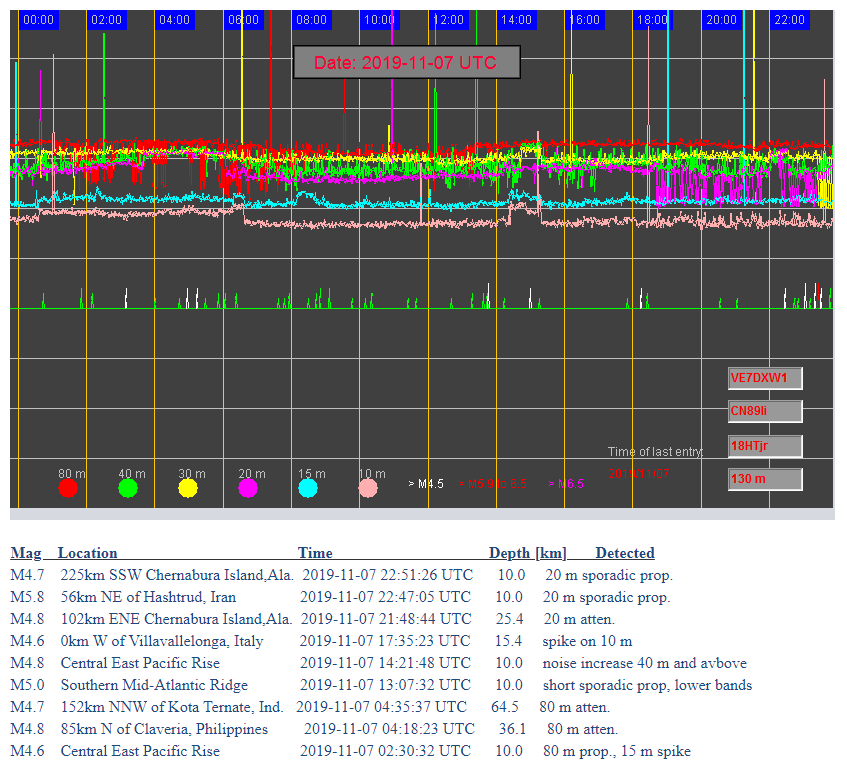 RF-Seismograph capture from November 7, 2019. Of the nine earthquakes detected by physical seismography worldwide that day, all of them had corresponding changes to RF propagation, as measured by the RF-Seismograph network. Source: VE7DXW

Since then, Schwarz and his band of citizen scientists have done a retrospective study of four years of RF-Seismograph data, comparing it to a list of known earthquakes during the same period. Of 171 quakes over magnitude 6.1, their data showed a spike in noise on the 80-m band corresponding to the time of the earthquake. In many of those observations, the noise spike was seen significantly before the start of the quake. Schwarz has prepared a handy PDF guide to interpreting the information-rich seismograms, along with analysis of all the major quakes observed in 2016.

Clearly, the RF-Seismograph is not yet ready to claim to have a solid predictive ability for earthquakes. For that matter, Dr. Heki’s space-based observations aren’t ready to stake that claim either. But it certainly looks like ionospheric changes can be correlated to earthquakes both in time and space, and the fact that the phenomenon can be observed with relatively simple equipment over a wide area means that we’ll likely know what the story is soon enough.

25 thoughts on “HF Propagation And Earthquakes”