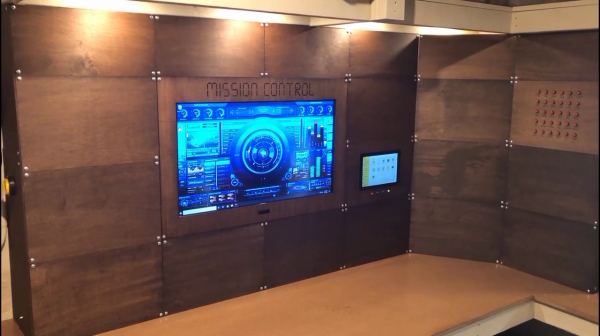 Tired of all your completed (or half-completed) projects cluttering up your workspace? Or you toss them in a box and later forget which box? Well [Another Maker] aka [Develop With Dan] came up with a solution which he dubs Mission Control — panelize your projects and store them in one of many cubbyholes which are provided by a false wall.

Each project gets a panel and is neatly stored away when not in use. For some project, this could be simply for storage. For other projects, this might serve as a showcase. Occupying the center of Mission Control is a large monitor, presumably a permanent installation. It looks like there are two different sizes of panels, but we wonder whether more and smaller panels might be more useful. As he’s putting this together, we particularly like one piece of advice that [Dan] offers regarding his custom tool, the Cornerator 3000:

Never hesitate to make a jig when you want to repeat something.

[Dan] will be posting this workspace on his GitHub repository along with code and documentation for various projects he posts on YouTube. He’s also proud to have built this system out of 100% recycled material, or as he says, he went dumpster diving. Do you have a good system for storing / displaying projects in your lab? Let us know in the comments below.

END_OF_DOCUMENT_TOKEN_TO_BE_REPLACED 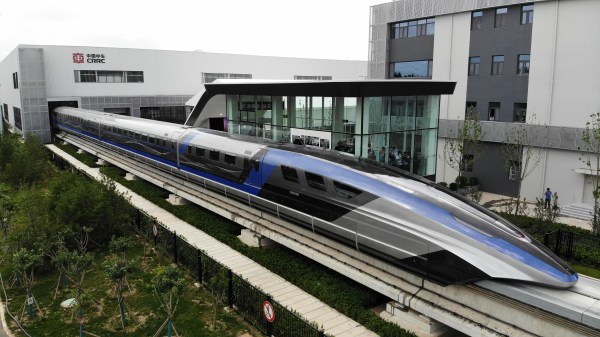 Maglev trains have long been touted as the new dawn for train technology. Despite keen and eager interest in the mid-20th century, development has been slow, and only limited commercial operations have ever seen service. One of the most well-known examples is the Shanghai Maglev Train which connects the airport to the greater city area. The system was purchased as a turnkey installation from Germany, operates over a distance of just 30.5 km, and according to Civil Engineering magazine cost $1.2 billion to build in 2001. Ever since, it’s served as a shining example of maglev technology — and a reminder of difficult and expensive maglev can be.

However, China has fallen in love with high-speed rail transport in the last few decades and has invested heavily. With an aggressive regime of pursuing technology transfers from foreign firms while building out the world’s largest high-speed rail network, the country has made great progress. Now, Chinese rail transit manufacturer, CRRC Corporation, have demonstrated their newest maglev train, which hopes to be the fastest in the world.

END_OF_DOCUMENT_TOKEN_TO_BE_REPLACED 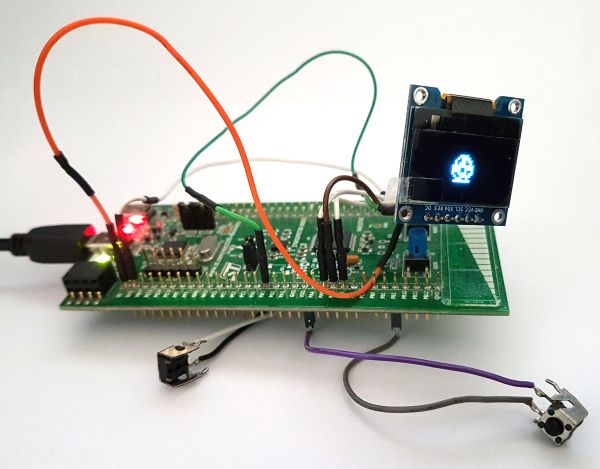 Tamagotchi’s relatively simple technical complexity pales in comparison to its huge cultural impact, with over 76 million sold. It has spawned comics, stories, numerous toys, and offshoots such as an anime and two films. [JC] was looking through some of his old stuff and came across a Tamagotchi P1 (the original Tamagotchi) and decided to create a portable emulator for it. The ROM for the P1 has long been dumped and can be run within a MAME emulator. After all, it’s just a 32MHZ E0C6S46 Epson MCU, 32×16 LCD with 8 additional icons, three buttons, and a piezo. The manual for the MCU is even available on Epson’s website. Here at Hackaday, we’ve seen Tamagotchis many times before, such as the infinite matrix of the Tamagotchi Singularity and a ROM dump of the latest generation of Tamagotchi based on a 6502 core.

So what’s different about what [JC] is trying to accomplish? For starters, the tooling. It is divided into two parts: TamaLIB and TamaTool. The first is a hardware-agnostic P1 emulation library that relies on a HAL layer to communicate with the hardware. The second is a frontend for the first, allowing debugging, RAM editing, and modifications to the ROM. In particular, it supports easy modification of images within the ROM and allows for custom eggs and Tamagotchis. The homage to the Jolly Wrencher is nice.

Given that the emulation is platform-agnostic and access to a low-resolution timer is not guaranteed, cycle counts become tricky. The rather clever solution [JC] stumbled upon was synchronizing against input polling, screen updates, and sound output. TamaLIb keeps track of how many CPU cycles have passed and regularly checks if the emulation is going too fast or too slow. Slowing down or speeding up the simulation allows it to seem to run in real-time.

The last goal [JC] had was to run it on embedded hardware. Using an STM32F072 board and a cheap OLED screen had a portable emulated Tamagotchi known as MCUGotchi. The code is available on GitHub and should work on most STM32 MCUs with a few small tweaks. Now that someone has gone through the effort to make it easy to run a Tamagotchi literally anywhere, it might not be long until we see a coffee maker or a smart light acting as a Tamagotchi. Perhaps the new joke will be, can it run Tamagotchi?

END_OF_DOCUMENT_TOKEN_TO_BE_REPLACED

Have you ever been looking for a screwdriver, USB stick, or your keys, only to find them right where you left them in plain sight? We have. As many prolific geocachers know, hiding things out in the open is a great way to make sure that people overlook them.

[Jacob Strieb] has been researching various ways to password protect and hide browser bookmarks in plain sight. He calls his latest technique “Bookmark Knocking” and he’s made a demonstration available on his Github account.

Why hide bookmarks to begin with? A browser’s bookmark collection can give away the habits, interests, and needs of the person who put them there. Bookmarks to gifts, domestic abuse support websites, and other private destinations might be best kept away from prying eyes.

Inspired by port knocking — opening connections to specific network ports in sequence to gain access through a firewall — bookmark knocking requires clicking bookmarks in a specific order to open a link. When the bookmarks are accessed in the proper order, the third bookmark reveals a hidden site. It’s not only a novel approach to hiding things in plain sight, it’s very cool to use!

We especially appreciate [Jacob]’s motivation: Helping those who are vulnerable to protect themselves in any way possible. It’s a solid reminder that technology can be elevated to a higher stature when put to a noble use. Be sure to check out the demonstration so you can try it for yourself!

If camouflaging data flips your bits, you may want to look at a neat way to embed data right into bash scripts, or conceal a WiFi enabled microcontroller in a USB cable. Do you have your own favorite “hidden in plain sight” hack? Be sure to let us know through the Tip Line.