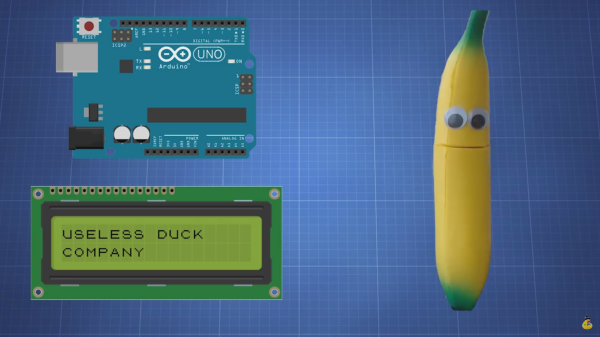 This is a tale as old as time. Not love, it is about keeping something you made safe from those who would destroy something beautiful. In this case, the thing of beauty is a talking banana who reads Twitch and Youtube comments. The ne’er-do-wells are trolls seeking to ban-anana the account by forcing it to recite restricted words.

The problems stem from a visit from [Greekgodx], whose followers tend toward the dark side. When they set their sights on [Mike Nichols]’ yellow automaton, things slipped into a bleak place, and a twenty-four-hour ban falls on the fruit. A bunch of filtering is done, but it isn’t enough to stop the trolls, and the tally-man adds a second permanent strike against the account. An arms race of slurs and filtering ensued until the robot was able to reject all attempts at racism.

The banana has since been peeled from the feeds, but if silly robots are your cup of tea, check out [Simone Giertz] turning a car into a computer mouse.

END_OF_DOCUMENT_TOKEN_TO_BE_REPLACED

[Incudie] tipped us off about a method to fix a borked HDD in your Xbox 360. Many of the one million consoles banned earlier in the month also had the hard disks scrambled making off-line gaming impossible as well. It turns out that this is caused by having a ban flag in the NAND chip on the motherboard. It has been discovered that because of wear levelling, the NAND will have two copies of the “secdata.bin” file which stores the ban flag. Please note, this will NOT allow the console to use Xbox Live, it just re-enables the HDD.

The quick and dirty of the fix is as follows: First the NAND is dumped from your Xbox 360 to a computer. After verifying the file, it can be opened in a HEX editor and the two copies of “secdata.bin” located. Once identified by date, the older version is injected on top of the newer to overwrite the ban flag.

Looks like this is not for the faint of heart, but if you got banned for modding in the first place this should be easy to pull off.

Update: Looks like xbox-scene now has a collection of apps to help you with this process. [Thanks CollinstheClown]

We’re sure you’ve heard about Xbox 360s facing an other round of bans from Xbox Live last week. It seems that living in a hole, or even in Grenora, North Dakota couldn’t help you escape hearing this from every news source possible. Apparently, this has caused a slew of banned consoles to go up for sale in a buyer-beware quagmire. This is a joke in several ways; didn’t the hardware problems of the machine already make the used market risky enough? Now consumers will be even more wary, losing game sales because less people are buying used consoles.

If you have just the right kernel, and a copy of your CPU key, and a second unbanned Xbox 360, you may be able to reactivate your machine. But how many people have those things available to them? Undoubtedly an Xbox 360’s desirability is greatly diminished if Xbox Live is removed from the equation. This is something Nintendo could learn from when it comes to the Wii (no online multiplayer with New Super Mario Bros Wii?… Really?). So whether you are the one who was banned, or you decided/were tricked in to purchasing a banned console, what are you going to do with it now that online play is out of the picture?

We’ve seen the console emulating SNES games and even XBMC run with the help of Ubuntu. Leave us a comment and tell us if you are planning to just go without Xbox Live, use the machine as a desktop running Ubuntu, or spearhead the effort to repurpose this powerful (and flawed) hardware platform. Will you go out and capitalize on cheaper hardware, or have you been burnt by the grim reality of a crippled rig?