[NeZoomie] built an RGB mood lamp as his first electronics project. He certainly hit it out of the park with this one, ending up with a design so clean it could be a commercial product. The controller is an Arduino board (further proof that this is a fantastic entry-level platform) that interfaces with 8 RGB LEDs. He’s built an enclosure out of thick polypropylene that does a great job of diffusing the light and adding a stylish look. The control system features a rotary potentiometer from SparkFun and what he calls a tilt-potentiometer of his own design after drawing inspiration from Hack a Day.

Blinky things are fun and that’s why we see a lot of mood lamps around here. Take a look at the video after the break and if you’ve got the parts, give this one a try!

END_OF_DOCUMENT_TOKEN_TO_BE_REPLACED 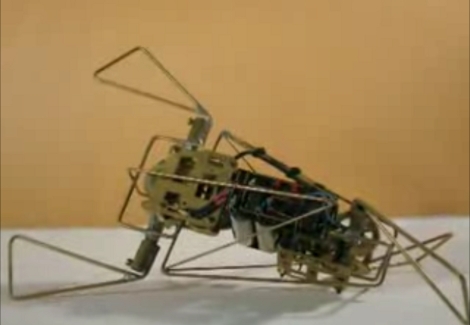 [Harm’s] tumbling robot from a few years back is an excellent study in simple motion. Foregoing wheels or legs, he uses four flippers to roll the robot around the room. Two motors are used, each in charge of two flippers. Identical but separate circuits drive the motors with a 74HC240 gate IC monitoring the continuously rotation. When a flipper becomes stuck, the circuit reverses the rotation of the motor so the simple bot can tumble its way out of a jam.

The circuitry is less advanced than some of the BEAM builds we’ve seen before. That doesn’t diminish the cleverness of his design and we think BEAM robotics are great way to get your head out of the computer code and go hardware only. After the break you can take in some video of the  tumbling motion. We’ve also included a video of another bot from his website that uses concentric rings for another type of unique locomotion.

END_OF_DOCUMENT_TOKEN_TO_BE_REPLACED

We’re sure you’ve heard about Xbox 360s facing an other round of bans from Xbox Live last week. It seems that living in a hole, or even in Grenora, North Dakota couldn’t help you escape hearing this from every news source possible. Apparently, this has caused a slew of banned consoles to go up for sale in a buyer-beware quagmire. This is a joke in several ways; didn’t the hardware problems of the machine already make the used market risky enough? Now consumers will be even more wary, losing game sales because less people are buying used consoles.

If you have just the right kernel, and a copy of your CPU key, and a second unbanned Xbox 360, you may be able to reactivate your machine. But how many people have those things available to them? Undoubtedly an Xbox 360’s desirability is greatly diminished if Xbox Live is removed from the equation. This is something Nintendo could learn from when it comes to the Wii (no online multiplayer with New Super Mario Bros Wii?… Really?). So whether you are the one who was banned, or you decided/were tricked in to purchasing a banned console, what are you going to do with it now that online play is out of the picture?

We’ve seen the console emulating SNES games and even XBMC run with the help of Ubuntu. Leave us a comment and tell us if you are planning to just go without Xbox Live, use the machine as a desktop running Ubuntu, or spearhead the effort to repurpose this powerful (and flawed) hardware platform. Will you go out and capitalize on cheaper hardware, or have you been burnt by the grim reality of a crippled rig?

Here’s something that the R/C airplane crowd might think of as old news.  These directions show us how to rework floppy drive and CD Rom motors to be high power airplane motors.  There are several listed, with details on each, but those unfamiliar might want to start with the most basic CD Rom version. It covers winding your own copper and installing the magnets in the “bell”, putting it all together and mounting it. This is a great writeup for those who haven’t seen this done before. If you want something even simpler though, you might enjoy the homopolar motor post. If you’re more advanced, they have tips for you too on machining and balancing the motors as well as winding density.

We stumbled onto one of [Nik Melton]’s projects, an Omni-car. It is omnidirectional, meaning it can go any direction at any time without having to turn. The body was designed by him, then printed with a 3D printer. The control scheme is what interests us though. He has found a simple way to wire it to get the job done. Sure you can see that it suffers from some pretty bad “drift” when trying to go in a straight line, but overall, we think he pulled it off well.

You might want to take a few moments to look around his project page. This guy has done a bunch of fun stuff  like delta robots, strange hybrid wheel/leg robots, tesla coils, and arm mounted flamethrowers. Judging by the videos, he’s pretty young too. We think his guy has a bright future ahead of him.

[Pcmofo] has shared a well-built, well-explained example of how to implement an RFID key system for a door. We call this the right way because it is well thought out and functional. In the past we’ve seen doors that unlock via a secret knock, keypads, and RFID, but they are all non-permanent solutions capable being transplanted from one door to another. Rather than building a mechanism to turn the door handle, this implementation uses an electric strike mounted in the framing of the door to allow access. These are used for security doors in buildings and are built to keep your door secure.

The hack in this case is the electronics. Using an AVR ATmega168 running the Arduino boot-loader, [pcmofo] has prototyped a two-part design. An RFID reader is mounted outside the door with data wires running to the inside where the microcontroller resides. A hard-coded RFID card is used as a “master” to train any number of tags for entry. The master puts the device in training mode and the next tag to be read is added to the list of tags authorized to open the door.

We like messy wires and quickly thrown together devices but this is built to last and will look great once mounted in an appropriate enclosure.