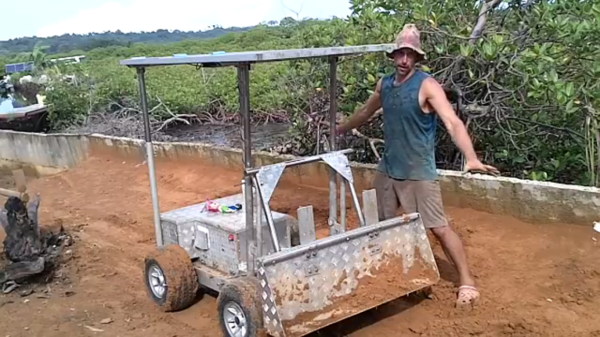 As the threat of climate change looms, more and more industries are starting to electrify rather than using traditional fuel sources like gasoline and diesel. It almost all cases, the efficiency gains turn out to be environmentally and economically beneficial. Obviously we have seen more electric cars on the roads, but this trend extends far beyond automobiles to things like lawn equipment, bicycles, boats, and even airplanes. The latest in this trend of electrified machines comes to us from YouTube user [J Mantzel] who has built his own solar-powered bulldozer.

The fact that this bulldozer is completely solar-powered is only the tip of the iceberg, however. The even more impressive part is that this bulldozer was built completely from scratch. The solar panel on the roof charges a set of batteries that drive the motors, and even though the bulldozer is slow it’s incredibly strong for its small size. It’s also possible for it to operate on solar alone if it’s sunny enough, which almost eliminates the need for the batteries entirely. It’s also built out of stainless steel and aluminum, which makes it mostly rust-proof.

This is an impressive build that goes along well with [J Mantzel]’s other projects, most of which center around an off-grid lifestyle. If that’s up your alley, there is a lot of inspiration to be had from his various projects. Be sure to check out the video of his bulldozer below as well. You don’t have to build an off-grid bulldozer to get started in the world of living off-the-grid, though, and it’s easy to start small with just one solar panel and a truck.

Thanks to [Darko] for the tip!

END_OF_DOCUMENT_TOKEN_TO_BE_REPLACED

For this year’s Hackaday Prize, [Marcin] is working on an Open Source Bulldozer. The ability to create earthworks and move dirt around is actually one of humanity’s greatest achievements, and enables the creation of everything from foundations for homes to trans-oceanic canals.

This Open Source bulldozer is astonishingly modular, scaleable from a one-ton microtractor to a 13,000lb dozer, with attachment points for blades, drawbars, and everything else you can attach to a Bobcat earthmover. It’s 168 horses of opensource earthmoving capability, and a perfect addition to this year’s Hackaday Prize.

[Marcin] and his group Open Source Ecology posted a video of this micro bulldozer rolling around on their shop floor recently; you can check that out below. You can also see our coverage of the GLVCS from several years ago.