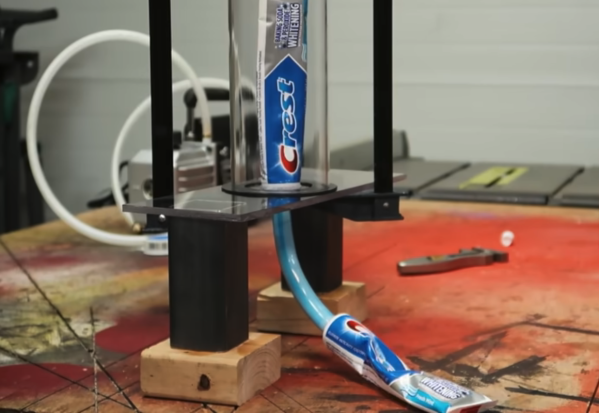 Old wives’ tales, folk knowledge, common sayings, and even cliches and idioms are often taken as givens since they form an often unnoticed part of our vocabulary and culture. There’s so many examples that it’s possible to fill a 17-season TV show busting potential myths like these, and even then there are some that slipped by. For example, the saying “you can’t put toothpaste back in the tube” which, as it turns out, is not as impossible as we might be led to believe.

This video is the product of [Tyler Bell] who has taken this idiom on as a challenge. To figure out if it was possible he first got to work building a vacuum chamber, which turned out to be a little easier than he thought it would be. After cutting a piece of polycarbonate tube and sanding it down, all that was needed were some rubber gaskets and fittings for the vacuum pump.

While not completely successful, he was able to get some toothpaste back into the tube with a relatively small bill of materials. It’s not likely that this experiment will result in a change of this particular idiomatic expression, but it was interesting to put it to the test nonetheless. For other instances of toothpaste and its relationship to tubes, both inside and out, be sure to check out this recent piece on various methods of toothpaste storage.

END_OF_DOCUMENT_TOKEN_TO_BE_REPLACED 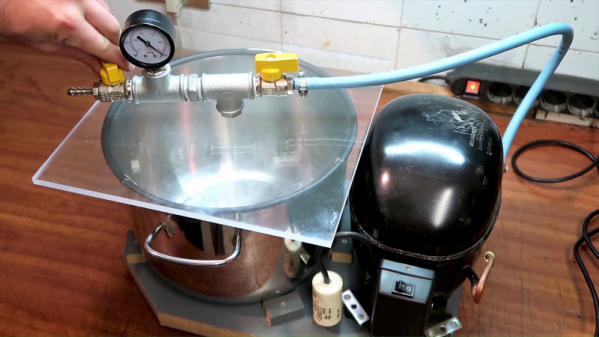 There’s nothing like a true hack, where something useful is concocted from bits of scrap and bargain store finds. Builds like these are much more than the sum of their parts, especially when they result in a useful tool, like this DIY vacuum chamber that’s good for all sorts of jobs.

Everything [Black Beard Projects] used to accomplish this build is readily available almost everywhere in the world, although we have to note that appliance recycling efforts and refrigerant recovery programs have made it somewhat harder to lay hands on things like the old fridge compressor used here. The big steel cooking pot is an easy thrift store find, though, and while [Black Beard] used high-quality stainless fittings and valves to plumb the chamber, pretty much any cheap fittings will do.

The one sketchy area of the build is the plexiglass sheet used for the chamber top, which seems a little on the thin side to us. You can see it flexing in the video below as vacuum is pulled; it survived, but we can see it failing catastrophically at some point. We stand ready to be reassured in the comments. Still, it’s a tidy build with a few nice details, like wiring a switch into the old start capacitor box and using car door edge protector as a gasket on the chamber.

Fridge compressor hacks are standard fare, of course, being used to make everything from air compressors to two-stroke engines. Sometimes they’re even used to keep things cool too.

END_OF_DOCUMENT_TOKEN_TO_BE_REPLACED 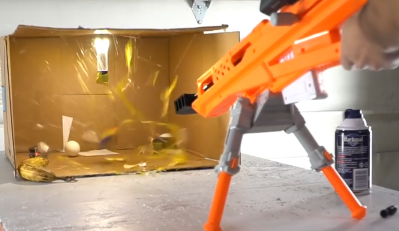