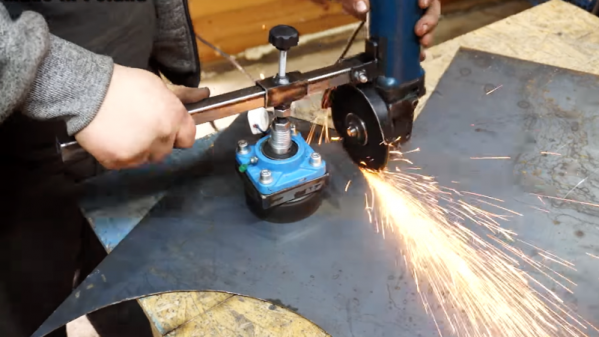 We like it when hacks are literal hack jobs, put together with what’s on hand to do a specific job. This quick and dirty angle grinder circle cutter certainly fills the bill, and makes decent cuts in sheet metal to boot.

The build starts with an unlikely source for parts – an old automotive AC compressor. The one that [Made in Poland] chose to sacrifice was particularly nasty and greasy, but after popping off the pulley, the treasure within was revealed: the large, ring-shaped clutch electromagnet. Liberated from the compressor, the electromagnet was attached to a small frame holding a pillow block. That acts as an axis for an adjustable-length arm, the other end of which holds a modified angle grinder. In use, the electromagnet is powered up by a small 12-volt power supply, fixing the jig in place on the stock. The angle grinder is traced around and makes a surprisingly clean cut. Check out the build and the tool in use in the video below.

At the time [Made in Poland] recorded the video, he noted that he did not have a plasma cutter. That appears to have changed lately, so perhaps he’ll swap out the angle grinder for plasma. And maybe he’ll motorize it for even smoother cuts.

END_OF_DOCUMENT_TOKEN_TO_BE_REPLACED We once enlisted a contractor to cut a plywood circle for a cat condo we were building. Now we’re embarrassed that we couldn’t come up with a solution as eloquent and easy to use as this circle cutting router jig which [Grays42] built.

He’s using a small trim router for the job. The jig is made up of two thick-walled pieces of PVC pipe. We don’t think the router is attached to jig. Instead you hold it against the wooden spacer which is on the outside edge of the cut. He doesn’t mention how he made the spacers, but we’d recommend cutting a hole the size of the pipes and then ripping down the middle to remove some of the material (tape the two spacers together during fabrication to ensure proper alignment). It just takes some nuts and bolts from the hardware store to assemble everything.

[Grays42] is using this to cut rings for his telescope build. We have our eye on it for making our own wooden Bulbdial clock. 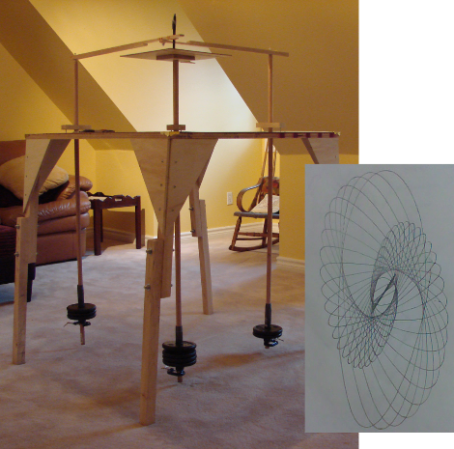 Just the other day we were thinking “You know what we need more of around here? Harmonographs!” And our requests were answered when [Paul] sent in his three pendulum harmonograph. For those unaware, it’s a mechanical device that draws Lissajous curves or “really cool circles” to quote some of our staff.

[Paul] includes all the plans necessary to make your own harmonograph and begin drawing today. If you can’t wait, there’s a video of the three pendulum harmonograph etching a masterpiece after the jump. END_OF_DOCUMENT_TOKEN_TO_BE_REPLACED