[Daniel Valuch] shared a fun and record-setting conference badge story (Slovak, translated) with us. He was one of the organizers for the “ZENIT in electronics” event, which is an annual Slovak national competition for students. During the competition, students are assigned a letter+number code for the purpose of result submission anonymity, and organizers are always on the lookout for a fun way to assign these codes – this time, they did it with custom silicon!

It just so happened that [Peter], one of [Daniel]’s colleagues, was at the time working for onsemi who were doing a tapeout and had some free space on their test chips. Of course, they didn’t have to think twice. When it was a student’s turn to draw their identification number, instead of a slip of paper, they received a SOIC-16 package with custom silicon bonded to it. Then, they had to solder it to their competition badge – which was, of course, a PCB. Each chip was individually laser-trimmed to contain the student’s number, and that number could then be decoded using a multimeter – or a reasonably sharp eye.

There’s way more to this competition story than just the badge, but the custom silicon part of it sure caught our eyes. Who knows, maybe next year stars will align again and we’ll see custom silicon on one of the hacker conference badges. After all, things have been advancing rapidly on that front – for instance, since Skywater PDK project’s inception in 2020, there’s been several successful runs already, and if you’d like to learn more, you could check the HackChat we’ve had this year, and this Remoticon 2020 workshop! 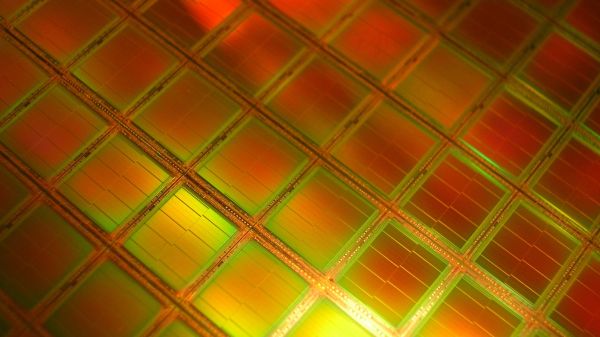 There was a time when all that was available to the electronics hobbyist were passive components and vacuum tubes. Then along comes the integrated circuit, and it changed everything. Fast forward a bit, and affordable programmable microcontrollers arrived on the scene. Getting started in electronics became far easier, and the line between hardware and software started to blur. Much more recently, the hobbyist community was introduced to field programmable gate arrays (FPGAs) and the tools necessary to work with them. While not as widely applicable as the IC or MCU, the proliferation of FPGAs among hardware hackers once again opened doors that were previously locked tight.

We’re currently on the edge of another paradigm shift, but it’s no surprise if you haven’t heard of it. After all, the last couple of years have been a bit unusual, so the 2020 announcement that Google was teaming up with SkyWater and Efabless to enable the design and manufacture of open source application-specific integrated circuits (ASICs) flew under the radar for many people. But not Matt Venn, the host of this week’s Hack Chat. For him, it was the opportunity he’d been waiting for. 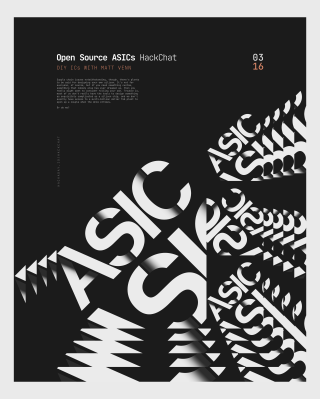 Matt started like many of us, building electronic kits and building new gadgets out of old discarded hardware. He graduated to microcontrollers, and became particularly interested in FPGAs when the open source toolchains started hitting the scene. Of course by this point, it was much more than just a hobby for him. He was presenting a talk at the 2019 Week of Open Source Hardware in Switzerland when he saw Tim Edwards from Efabless demo a chip that had been made with open source tools. Unfortunately, the costs involved were still far too high for an individual to put their ideas into silicon.

So when Google and Skywater announced they would be footing the bill to have selected open source ASIC designs manufactured a few months later, Matt says he was in a good position to jump in. He has since started running the Zero to ASIC Course which aims to teach you how to produce your own chips using the open source Process Development Kit, and so far 160 people have taken him up on the offer.

As you might expect, many of the questions in the Chat had to do with what kind of designs you can actually produce using the 130 nm process. Especially given the limits on the physical space each creator’s circuit can take up on each multi-project wafer (MPW). Others wanted to know how difficult it would be to port over existing FPGA designs, or how well the process worked with analog applications. With the number of designs Matt has seen go through his course, he could answer many of the questions just by pointing to a particular individual’s ASIC. For instance, he held up the digital-to-analog converter from Harald Pretl and Thomas Parry’s 5 GHz satellite transceiver as prime analog examples.

So let’s say you put the work in to design an ASIC and it gets approved to be produced on a future MPW, what then? Well, first you have to hope everything goes according to plan. Matt explains that the initial run was almost a total write-off due to timing problems in the toolchain, though in the end, he was largely able to recover his own chip. But they’ve done several runs since then, so let’s assume there’s no production problems. What exactly ends up on your doorstep?

If you were expecting a handy DIP8, you might be disappointed. While some DIY friendly packages would be nice, right now the ASICs ship as wafer level chip scale package (WLCSP) with an unforgiving 0.5 mm pitch. If you can believe it, that’s actually an improvement over the first run, which shipped out as a bare die. Of course as Matt pointed out, anyone who’s gotten to the point of designing their own custom ASIC probably won’t be scared off by the prospect of some fine-pitch soldering. Some in the Chat wondered about the difficulty in getting compatible PCBs produced, but Matt said that in his experience OSH Park has been up to the challenge.

Like the Metal 3D Printing Hack Chat before it, this week’s session went over a topic that’s on the absolute cutting edge of what’s possible for hardware hackers and hobbyists. Truth be told, the vast majority of the people reading Hackaday are no more likely to send away for their own custom ASIC as they are to battle x-rays in an attempt to sinter metal with a homebrew electron gun. But that doesn’t make the fact that some folks out there doing it any less important, or inspiring. That said, if you do end up being one of those select few that can boast they’ve designed a custom chip of their own — don’t forget to send one of them our way.

We’re grateful Matt Venn was able, once again, to share his valuable experience in the realm of open source application-specific integrated circuits with us. If you haven’t checked them out already, the Zero to ASIC workshop he ran for Remoticon 2020 and his talk Open Source ASICs – A Year in Perspective from Remoticon 2021 are required viewing if you want to learn more about this fascinating new frontier in hardware hacking.

END_OF_DOCUMENT_TOKEN_TO_BE_REPLACED

Ages ago, making a custom circuit board was hard. Either you had to go buy some traces at Radio Shack, or you spent a boatload of money talking to a board house. Now, PCBs are so cheap, I’m considering tiling my bathroom with them. Today, making a custom chip is horrifically expensive. You can theoretically make a transistor at home, but anything more demands quartz tube heaters and hydrofluoric acid. Custom ASICs are just out of reach for the home hacker, unless you’re siphoning money off of some crypto Ponzi scheme.

Now things may be changing. Costs are coming down, the software toolchain is getting there, and Onchip, the makers of an Open Source 32-bit microcontroller are now working on what can only be called a, ‘OSH Park for silicon’. They’re calling it Itsy-Chipsy, and it’s promising to bring you your own chip for as low as $100.

The inspiration for this business plan comes from services like MOSIS that allows university classes to design their own chips on multi-project wafers. This aggregates multiple chips onto one wafer, bringing the cost of a prototype down from tens of thousands of dollars to about five thousand dollars, or somewhere around a thousand dollars a chip.

Itsy-Chipsy is taking this batch processing one step further. This is a platform that combines multiple projects on one die. That thousand dollar chip is now sixteen different projects, tied together with regulators, current sources, clocks, and process monitors. Using a 2 mm by 2 mm chip size, Itsy-Chipsy gives chip designers 350 μm of silicon using a 180 nm CMOS process. That’s enough for a basic 32-bit RISC-V microprocessor in a QFN or DIP 40 for just one hundred dollars.

This project is a contender for The Hackaday Prize — the Prize ends in November and we’d be amazed to see results by then. The Onchip team is talking to foundries, though, and it looks like there’s interest for this model in the industry. We’d guess that the best case scenario is a crowdfunding campaign for an OSH Park-like chip fab sometime in 2019. Whenever it comes, this is something we’re eagerly awaiting.