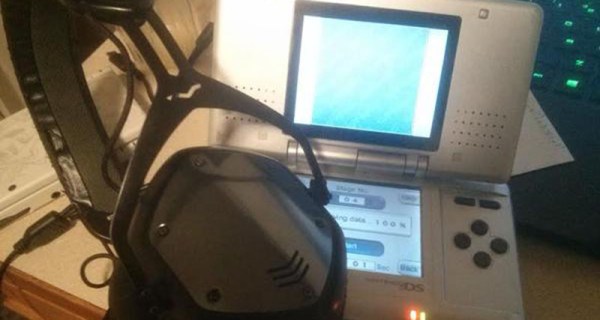 Even if you haven’t ripped off the top screen of your original DS to create an even better Game Boy Advance yet, there still might be some life left in that old bit of hardware. [Smea] is running unsigned code on the Nintendo DS, using only a bargain-bin game and an audio file.

The exploit this time comes in a form that might be familiar to anyone who has ever installed the homebrew channel on a Wii. Like SmashStack, this exploit uses a level editor/transfer feature in a game, this time with a 6 year old DS game Bangai-O Spirits.

[smea] is using the sound-based level transfer feature to load unsigned code into the DS. This level-transfer feature works by sending a single period sine wave at 1024Hz with a given amplitude; a binary 1 is a few dB louder than a binary 0, and with a buffer overrun it’s possible to load code into a DS and jump into that code. There’s no redundancy, error correction, and is not the thing you want when loading unsigned code onto a DS. It does, however, work.

The code to generate the audio payload for this exploit is available on github and if you have a copy of Bangai-O Spirits, you can try it out for yourself by playing this file (headphone warning).

Thanks [gudenau] for the tip

END_OF_DOCUMENT_TOKEN_TO_BE_REPLACED END_OF_DOCUMENT_TOKEN_TO_BE_REPLACED

The venerable Game Boy is dead – and has been for a long time – after being replaced by the DS, DSi, DSi XL, and the 3DS. That doesn’t mean there’s nothing of value to the old Game Boy catalog; Pokemon Red/Blue is still as much fun as it was 15 years ago, and the game play of Advance Wars is still superb.

[Maarten] over at Bureau voor Gamers decided to put a modern twist on our old friend by taking a first-gen DS and converting it to a proper single screen Game Boy (Dutch, Google translation).

The donor machine was a broken first gen DS with a broken top screen. [Maarten] removed the top screen, did a tiny bit of Bondoing, moved the speaker, and gave his new toy a bright orange paint job.

Now [Maarten] has a modern version of the best portable system ever created, packed full of more powerful hardware and a much more capacious battery. Sure, it’s not a build that requires rewiring everything, but it’s still an awesome build for GBA aficionados. END_OF_DOCUMENT_TOKEN_TO_BE_REPLACED

[Epokh] has release some homebrew software that uses a Nintendo DS as a voice reader for documents. This is extremely useful for blind and visually impaired folks who normally use screen readers but can utilize this technology for reading books, documents, and email on the go. Future versions look to add an email client and implement OCR via the camera for reading documents on the go.

The flite package is utilized to provide the text to speech functionality. We’re familiar with this package and judging by the video after the break, it lost nothing in the port to the DS hardware. [Epokh] pointed out that similar readers can cost $1500 when a DS sells for around $130. We can’t wait to see the final version fleshed out!

END_OF_DOCUMENT_TOKEN_TO_BE_REPLACED

Sometimes we wonder if we’re making good choices with PCB layout when using EagleCAD. Watch how the pros do it with a video of an hour-long Adafruit PCB layout session compressed into seven minutes.

[Elijah] documented his RepStrap build. This is a chicken-or-egg project in that RepStrap machines are built without the assistance of an already existing RepRap.

Here’s an ASUS concept from CeBIT this year for a laptop that has two touch screens and no physical keyboard. Isn’t this just the DS project we saw this week but in a nice case?

[James] conjured up a physical realization of the Spinning Wheel of Death for an art exhibit. We can’t stop smiling when looking at this artful hack.

I’m sure nobody will raise an eyebrow when you pop out that roll of duct-tape and affix your phone to the airplane window. That’s what [floe] did to make this airline flight time-lapse video with an Android phone. Aren’t you supposed to turn off all electronics for takeoff?

It’s hard to believe we missed this one from a couple of years back but we’re thankful that reader [Christian] tipped us off about it. This a Nintendo DS with two tablet pc screens being used as an external display. He’s using an FPGA but not to emulate the processor. It is translating the video data from the DS board into usable signal for the larger LCD screens. In the video after the break you can see that pen input has been implemented, with the FPGA sending location data back to the DS.

[Neal], the creator, priced the project out at around $580. It’s worth a lot more considering the know-how needed to get the video scaling and pen input right using the FPGA. It won’t fit in your pocket, but it doesn’t have a case either so it’s not going anywhere anytime soon.