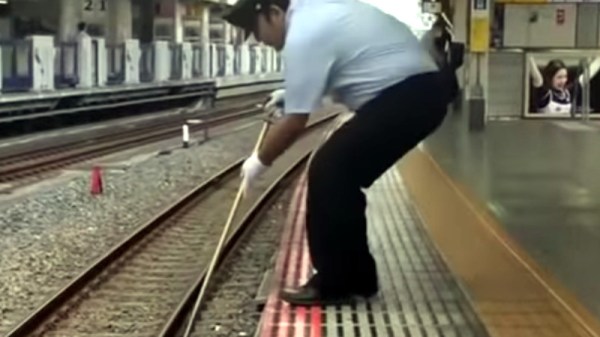 Over the past years, the trend has become to ditch anything with wires. This has led to many people dropping wired earphones and headphones for wireless (Bluetooth) versions. Yet along with the freedom from having the wires snagged on something and having earphones painfully torn out of your ears comes the very real risk of having them drop out of your ears to land potentially very inconvenient.

In Japan this has led to a big issue for railway companies, where throngs of commuters will often accidentally drop possessions onto the tracks. Staff members will then use a mechanical claw (‘magic hand’) to fetch them without having to risk their life by jumping down. With small items such as wireless earphones, this is however not so easy. With 947 cases of dropped earphones in the period of July-September in just the Tokyo area, this has led to desperate staff members coming up with new methods of easily retrieving the small gadgets.

Solutions range from putting something sticky like tape at the end of a stick, to modifying vacuum cleaners. Most recently Tokyo railway company JR East has collaborated with Panasonic to develop a vacuum cleaner-like device that is especially designed to easily retrieve such small items from the tracks, according to the Japan Times article.

The embedded video (also found after the break) from a Japanese broadcaster describes the issue in detail, along with tips on how to properly wear earphones so that they’re far less likely to fall out when you’re waiting on the tram or walking down the street. While it’s possible to fetch your dropped wireless earphones from the tracks, having someone step on it right after it falls out of your ear on the street is less easy to recover from.

END_OF_DOCUMENT_TOKEN_TO_BE_REPLACED 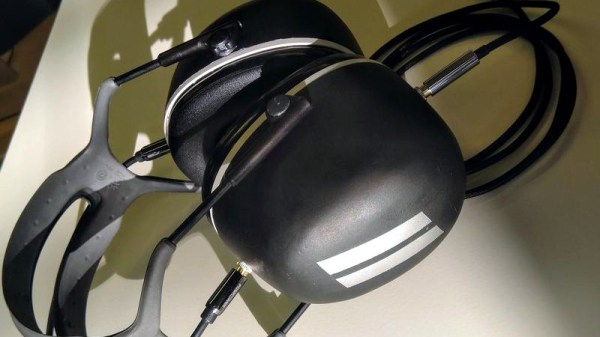 Working in a noisy office can be distracting. To combat the problem in his workplace [Rikard Anglerud] bought himself a pair of 3M ear defenders. They were good, but not quite good enough to completely extinguish the noise, so he inserted the drivers from a pair of cheap headphones and played a low-level white noise. This prototype proved effective, so he returned to the project and produced a much nicer pair that approach much more costly cans in their execution.

[Rikard’s] first set of headphones left something to be desired in the quality department. The second set followed with a pair of better-quality drivers sourced online, and more care was taken with cable routing and in their fitting. Finally some filler was used to remove the moulded 3M branding, and make them look more hi-fi than workwear.

From an audiophile perspective these cans might not approach a very high quality pair because their drivers are unlikely to be matched to the acoustic properties of their enclosures. But it sounds as though he’s achieved an adequate result despite that, and completely satisfied his need to exclude office noise.