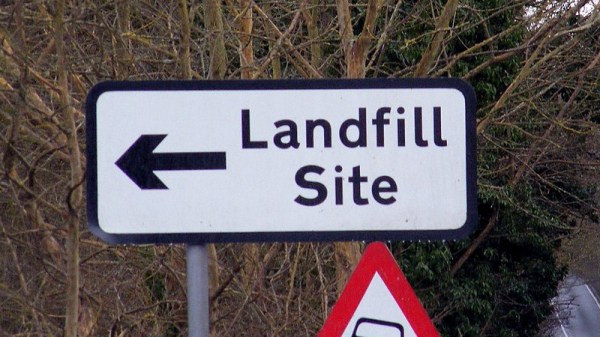 Many of you will at some time have heard the unfortunate tale of [James Howells], a Welsh IT worker who threw away a hard drive containing 8,000 Bitcoin back in 2013. Over the years he’s hatched various schemes to persuade his local council to let him dig up the landfill where it’s reputed to be buried, and every time he’s been rebuffed. Despite the fall in the price of cryptocurrencies he’s back with another. With the added spice of AI and robot dogs alongside the cryptocurrency angle, it reads like a buzzword bingo card and adds a whole new meaning to “Bitcoin mining”. Seemingly despite generous offers the local council are still not keen on letting him dig for the drive.

We can’t help feeling sorry for the guy — after all, in the early days of cryptocurrency the coins were a worthless curiosity so it’s not impossible there are readers with similar stories. But we’re curious how well the drive will have survived its 9-year interment even if the AI robot arm and robot dog security would ensure its recovery. With that much cash at stake the best in the data recovery business will no doubt be unleashed on whatever remains they might recover, but in the unfriendly environment of a festering landfill we’d be curious as to whether chemical action might have corroded the platters to the point at which nothing might remain. Wales has a high rainfall unlike the American southwest, so we doubt it would survive as well as an Atari cartridge.

Meanwhile, tell us your cryptocurrency might-have-beens in the comments.

Hackaday editors Elliot Williams and Mike Szczys are enamored by this week’s fabrication hacks. There’s a PCB mill that isolates traces by scratching rather than cutting. You won’t believe how awesome this angle-cutter jig is at creating tapered augers for injection molding/extruding plastic. And you may not need an interactive way to cut foam, but the art from the cut pieces is more than a mere shadow of excellence. Plus we gab about a clever rotary encoder circuit, which IDE is the least frustrating, and the go-to tools for hard drive recovery.

END_OF_DOCUMENT_TOKEN_TO_BE_REPLACED

Not all hard drives fail the same way. DataCent, a data recovery service based in Canada, has an impressive archive of failing hard drive sounds. If you’re ever in doubt about whether your hard drive needs help, this is your guide. From bad heads to stuck spindles, bad hard drives click, grind, hum, and scratch. It’s almost musical in its regularity. Who will be the first person to string of these samples together into a ringtone or techno song.

Today wrapped up with a talk on recovering data from solid state hard drives by [Scott Moulton]. The talk focused on the differences in data storage between SSD and platter technology. I did come away with a few interesting bits of knowledge. In an effort to extend device life, flash based drives store changed data to a new location, leaving the old data intact until a garbage removal subroutine gets around to clearing it out. Probably the best way to recover data from them will be altering or replacing the controller chip so you can access old data.

Yesterday I caught an interesting talk on recovering passwords from drive images by [David Smith]. He found that he could take a system image, strip out all the strings that were stored by various programs and use them to build a dictionary of possible passwords. By limiting string lengths and matching for known password policies, he was able to further filter his dictionary for likely passwords.