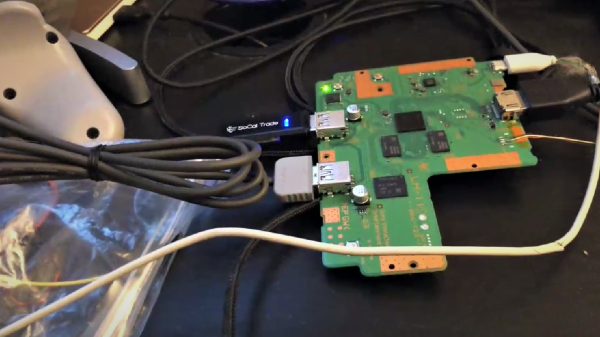 When Sony announced they planned to release their own classic/mini/plug-n-play system this year, many fans were filled with excitement at the chance to relive countless classic games from the 90s. However, once the actual list of titles were made public that excitement faded as reality set in. So many favorites like Crash Bandicoot and Spyro the Dragon were left off the final PlayStation Classic list, no doubt due to the complexity of licensing agreements. That will all soon change now that [YifanLu] cracked the PlayStation Classic live on a Twitch stream thus laying the ground work for swapping-in a “more curated” list of classic PlayStation games.

Over the course of three days, [YifanLu] documented the process in real-time of cracking the PlayStation Classic’s security armed with little more than a keyboard. The crux of the hack came from fellow hacker [madmonkey]’s revelation that the firmware update files were signed with a key that had been mistakenly left behind on the device by Sony. Or as [YifanLu] stated, “One key is, ‘Hey am I Sony?’…The other key is saying, ‘Hey I am Sony.’ They distributed the key that identifies [themselves] uniquely and this key doesn’t expire for another 50 years or so.”

Once inside [YifanLu] was able to sideload a prototype image of a Crash Bandicoot over USB. He simply overwrote the first title on the list, Battle Arena Toshinden, and could launch the freshly injected game from the PlayStation Classic menu screen. The video below is from Day 3 of the PlayStation Classic hacking series, so skip to timecode (03:44:45) to see the results in action. For a bit more nuance there are another 15 hours or so of video to catch-up on [YifanLu]’s Twitch page. Here’s to everyone getting their favorite onto the PlayStation Classic in the near future.

END_OF_DOCUMENT_TOKEN_TO_BE_REPLACED 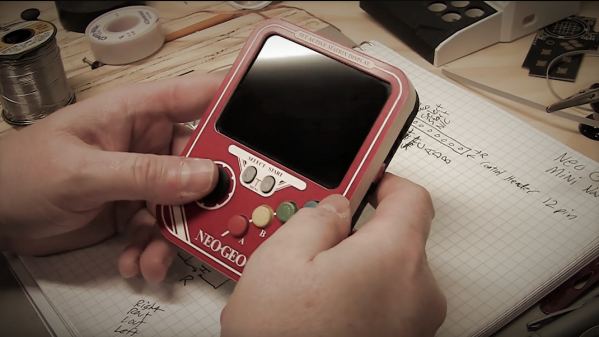 It feels like that Neo Geo Mini kinda came and went. All the hype surrounding the idea of having a tiny usable arcade machine melted away when the original system’s fans first touched the “non-clicky” joystick. While it was encouraging to see the inclusion USB-C power, there was no internal battery to allow players to use the system untethered. Not satisfied with the product in its current state [Ben Heck] shot a video detailing his latest portable creation using the Neo Geo Mini internals.

The design of the portable focuses around incorporating aspects of the Neo Geo MVS arcade system that the Neo Geo Mini lacks. The D-pad includes tiny micro-switches, or as [Ben Heck] calls them nano-switches, for a decidedly more tactile feel. He was able to re-purpose the speakers and headphone jack from the original PCB along with the 4:3 aspect ratio LCD. The custom faceplate wraps everything in the familiar red and white insignia while the 3D printed face buttons come in the classic red, yellow, green, and blue. Don’t worry, they are finally in the right button configuration here.

It’s great to see [Ben Heck] still making portable magic since his YouTube show ended earlier this year. He has contributed a lot to the modding community over the years, and there are plenty of helpful tips scattered throughout this Neo Geo Mini portable video as well. Note that the build is split into two separate videos (part two is below). We look forward to many more projects like this from [Ben Heck] in the future.

END_OF_DOCUMENT_TOKEN_TO_BE_REPLACED

Not content with Nintendo’s current portable video game offerings, fifteen year old hardware hacker [Xteaphn] (pronounced “Steven”) has come up with a series of hardware modifications to make a battery-operated Wii console. The hacked console features a folding laptop-like screen, which apparently includes the IR emitters necessary to make the Wiimote operate properly, as well as a set of tiny stereo speakers. To show how tiny the modified console is, [Xteaphn] provides size comparisons with thirteen- and fifteen-inch laptops as well as with a classic Nintendo Game Boy. The only potential hindrance to its long-term durability, as best as we can tell from the video, is that the battery pack and its associated connecting wires hang crudely off the back of the console like a sort of electric colostomy bag.

END_OF_DOCUMENT_TOKEN_TO_BE_REPLACED

If you feel that your iPhone alone no longer carries the cachet it once did, what with the price dropping and all, this may be just the modification that you need to stand out among the crowd. iPhones.ru has a teaser glimpse of an iPhone hack that causes the Apple logo on the back of the device to light up when the screen is turned on. Details are sketchy, but it appears that the hack involves replacing the metal insert on the back of the phone with an LED-equipped plastic one; custom software allows the user to select the brightness of the glowing effect independently of screen brightness… or maybe they’re just using the backlight.