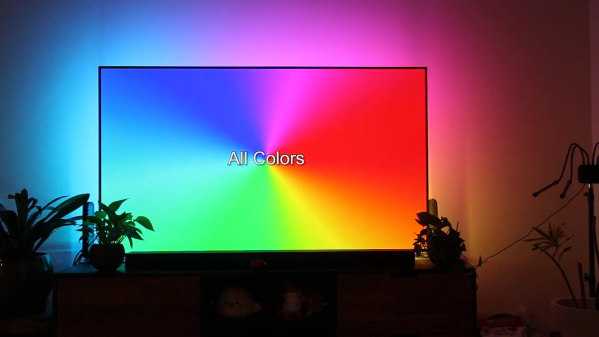 [AndrewMohawk] had seen all kinds of ambient lighting systems for TVs come and go over the years, and the one thing they all had in common was that they didn’t live up to his high standards. Armed with the tools of the hacker trade, he set about building an Ambilight-type system of his own that truly delivered the goods.

The development process was one full of roadblocks and dead ends, but [Andrew] persevered. After solving annoying problems with HDCP and HDMI splitters, he was finally able to get a Raspberry Pi to capture video going to his TV and use OpenCV to determine the colors of segments around the screen. From there, it was simple enough to send out data to a string of addressable RGB LEDs behind the TV to create the desired effect.

For all the hard work, [Andrew] was rewarded with an ambient lighting system that runs at a healthy 20fps and works with any HDMI video feed plugged into the TV. It even autoscales to work with video content shot in different aspect ratios so the ambient display always picks up the edge of the video content.

With 270 LEDs fitted, the result is an incredibly smooth and fluid ambient display we’d love to have at home. You can build one too, since [Andrew] shared all the code on Github. As an added bonus, he also gave the system an audio visualiser, and tested it out with some Streetlight Manifesto, the greatest third-wave ska band ever to roam the Earth. The Fourth Wave still eludes us, but we hold out hope.

We’ve seen plenty of hacks in this vein before; one of the most impressive hacked a smart TV into doing the video processing itself. Video after the break.

END_OF_DOCUMENT_TOKEN_TO_BE_REPLACED 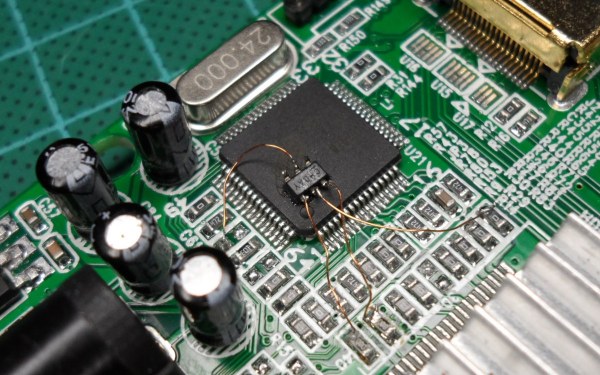 It warms our hearts when the community gets together. [esar] needed to get a decrypted HDMI stream for his home theater system. A tip-off in the comments and a ton of good old-fashioned hacking resulted in a HDMI splitter converted into a full-featured HDMI decrypter. Here’s the story.

His amazing custom Ambilight clone got profiled here, and someone asked him in the comments if it worked when High-bandwidth Digital Content Protection (HDCP) is on. [esar] lamented that it didn’t. Hackaday readers to the rescue. [Alan Hightower] and [RoyTheReaper] pointed [esar] to the fact that HDMI splitters need to decrypt and re-encrypt the signal to pass it on, and pointed him to a trick to knock out the on-board microcontroller. [esar] took off from there.

Unfortunately, taking the micro out of the picture messed with a lot of other HDMI functionality. So [esar] started digging in the datasheets for the HDMI splitter chip, looking for registers relevant to the re-encryption. If he could get in between the microcontroller and the splitter chip on the I2C bus and disable the re-encryption, he’d be set.

If you’re at all interested in I2C hacking or abusing HDMI splitters, you need to read his post because he details all of the tribulations and triumphs. He first tries just brute-forcing the I2C by overwriting a 1 bit with a 0. This (correctly) signals the micro that there’s been a conflict on the bus, so it re-sends the command again. Dead end.

He then found another signal that the receiver could use say that it wasn’t decrypting. He tried sending this continuously to the splitter so that it would stop encrypting. That worked, but only for one channel, some of the time. It turns out that his code was taking too long in his bit-banged I2C code. He fixes this up and all is well? Well, 90% of the way there.

To hammer down the last 10% of the functionality, [esar] buys a couple more splitters, experiments around with another splitter chipset that works with 3D, and solders some more wires to enable the Audio Return Channel. And after a ton of well-documented hard work, he wins in the end. 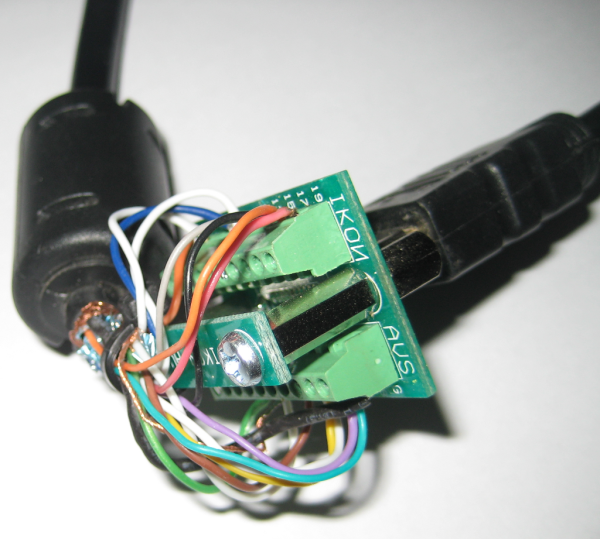 There’s two really useful parts to this hack which involves sniffing the HDMI protocol’s HDCP security keys. The first is just getting at the signals without disrupting communications between two HDCP capable devices. To do so [Adam Laurie] started by building an HDMI breakout cable that also serves as a pass-through. The board seen above is known as an HDMI screw terminal board. The image shows one cable connecting to itself during the fabrication process. What he did was cut one end off of an HDMI cable, then used a continuity tester to figure out which screw terminal connects with which bare wire. After all the wires are accounted for the end with the plug goes to his TV, with a second cable connecting between the board’s socket and his DVD player.

The rest of his post is dedicated to sniffing the security keys. His weapon of choice on this adventure turns out to be a Bus Pirate but it runs a little slow to capture all of the data. He switches to a tool of his own design, which runs on a 60MHz PIC32 demo board. With it he’s able to get the keys which make decrypting the protected data possible.

[bunnie] is up to his old tricks again. He successfully implemented a man-in-the-middle attack on HDCP-secured connections to overlay video in any HDMI video stream. There’s a bonus, too: . It doesn’t violate the DMCA at all.

HDCP is the awful encryption scheme that goes into HDMI-compatable devices. Before HDCP, injecting video overlays or even chroma keying was a valid interpretation of fair use. [bunnie] thinks that HDMI devices should have the same restrictions analog devices have, so he decided to funnel his own video into his TV.

The build uses the NeTV, a handy and cheap FPGA board with an HDMI input and output. [bunnie] got the FPGA to snoop the HDMI bus and decide if a pixel needs to be changed or not. This isn’t much different from what researchers in Germany did a few months ago, but unlike the academic security researchers, [bunnie] gives you a shopping list of what to buy.

As an example of his work, [bunnie] implemented something like a ‘tweet ticker’ on HDCP-encrypted video. There’s very little the NeTV setup can’t do from chroma keying, filters, or simply dumping the HDMI stream to a hard disk. Check out the slides from [bunnie]’s talk to get better idea of what he did.

[PAPPP] found a video of the talk in question. Check that out after the break.

END_OF_DOCUMENT_TOKEN_TO_BE_REPLACED Pastebin has the HDCP master key that we talked about in a post last week. This is the encryption protocol used for HDMI content protection on media such as Blu-Ray and High Definition cable television.

The master key array is a 40×40 set of 56-bit hex used to generate the key sets. You get one brief paragraph at the top of the document explaining what to do with this information. If you ask us we’re more interested in how this set was determined. So for some background information read the key selection vector (KSV) Wikipedia page. That points us to an interesting discussion proposing that if 40 unique device-specific KSVs can be captured, they could be used to reverse-engineer the master key. And finally, a bit of insight from a Reddit user (make your own decision on the dependability of this information) commenting on the value of having the master key.

In his comment, [iHelix150] covers the revocation system that HDCP uses to ban devices that are being used to circumvent copy protection. He says that having the master key makes it possible to push your own revocation lists onto devices. Each time a list is written to your device (TV, Blu-ray, etc.) the version number field for the list is updated. If you push an update with nothing on the revocation list, and set the version number to a binary value of all 1’s it will prevent any more rewrites of the list. This means that any previously banned hardware will be allowed back into the chain or trust.

So far this probably means nothing for you. But it’s fun to watch the cat-and-mouse involved in the DRM struggle, isn’t it?