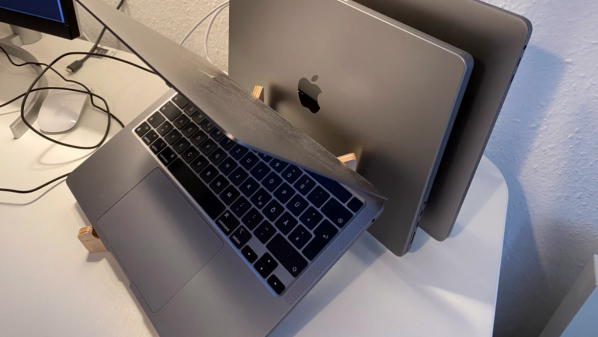 We make the tools we need, and that’s definitely the case with [Marco Schulte]’s laptop stand. It slots not one, not two, but three laptops at once. 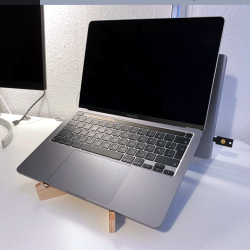 For all their portability, multiple laptops can be a bit clunky to manage on a desk, so [Marco]’s solution definitely saves space while keeping things accessible. The laptop in the front can be open for use and easy access, while the two in the back are held vertically and can be attached to external monitors or other peripherals.

Not only does it save space, but the stand provides ample spots to anchor cable ties for securing the inevitable mess of wires and cables that dealing with three laptops brings. It makes for a tidier desk, that’s for sure.

The stand was designed in Fusion 360 and was cut from plywood with a CNC router. Does this design give you any ideas, or would you like to make one for yourself? The design files are here.

No access to a CNC router? No problem if you have glue and some spare boxes laying around! You might be surprised at how sturdy a few layers of cardboard and glue can be.

If you had a formal drafting class, you probably learned about making orthographic projections–engineering drawings with multiple views (for example, top, front, and right). Even if you didn’t take the class, you’ve probably seen drawings like this where you view a 3D object as a series of 2D views from different angles.

These days, you are more likely to create a 3D model of an object, especially if you are going to 3D print it. After all, the 3D printer software is going to expect a model. When [Nightshade] wanted a laptop stand for his workbench, he started trying to do a 3D model. His final product though, was made by creating two views in Inkscape. They aren’t exactly orthographic projections of the final product, but the idea is similar.

Inkscape is a vector graphics program and generally creates SVG files, although it can also save EPS files. [Nightshade] used pstoedit to convert the EPS output to DXF format. DXF files are still two dimensional, but OpenSCAD can extrude DXF files into 3D shapes.

Just having a 3D shape of one view isn’t sufficient, though. The OpenSCAD script rotates the objects to the correct orientation and intersects them to form the final object. This is different from the usual cases of using Inkscape to trace a scan or generate simple text.

END_OF_DOCUMENT_TOKEN_TO_BE_REPLACED [Michael Davis] sent in his homemade laptop tray. He does a lot of traveling in his Toyota Tacoma and was looking for a good way to mount his laptop inside. Unfortunately, [Michael] soon discovered that commercial laptop trays can be very expensive and difficult to install. He saw an opportunity in the empty cup holder in his car. Fifteen dollars worth of PVC pipe fittings and a piece of plywood later he had a laptop tray.