Most gyms are closed right now due to social distancing rules, which is what we’re using as our latest excuse to justify our sloth-like lifestyle. But apparently some people miss working out enough that they’re putting together impromptu home gyms. [Michael Pick] has even outfitted his DIY pull-up station with an Arduino to keep track of his exercise while on lockdown. You may not like it, but this is what peak performance looks like.

In the video after the break, [Michael] explains the design and construction of the bar itself which technically could be thought of as its own project. Obviously the Arduino counter isn’t strictly necessary, so if you just wanted to know how to put some scraps of wood and suitably beefy rod together in such a way that it won’t rip off the wall when you put your weight on it, this video is for you.

Towards the end of the video, he gets into an explanation of the electronic side of the project. Inside the 3D printed enclosure is an Arduino Pro Mini, a HC-SR04 ultrasonic sensor, and a 1602 serial LCD. Once the gadget has been mounted in the proper position and activated, it will count how many pull-ups [Michael] has done on the screen.

While we historically haven’t seen a whole lot in the way of homebrew exercise equipment, the current COVID-19 situation does seem to be getting the adrenaline flowing for some of you. We recently covered some DIY dumbbells made from hardware store finds that would be an excellent first project for any hackers who’ve recently been ejected from the Matrix and are trying to use their muscles for the first time.

END_OF_DOCUMENT_TOKEN_TO_BE_REPLACED

Due to social distancing, gym rats throughout the world are turning everyday objects into exercise equipment to keep up the routine without actually hitting the gym. A particularly pleasing version of this are these concrete dumbbells whipped up by the unfortunately named hacker [ShitnamiTidalWave]. 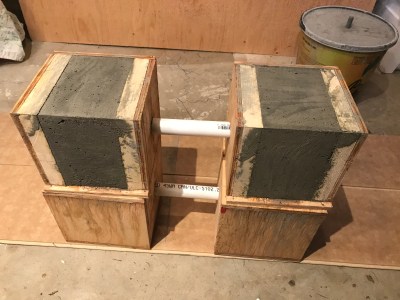 If you happen to have half a bag of concrete — quick set or otherwise — out in the shed you can follow the lead on this one. But even if you’re not the kind of person who has “arm day” on your calendar (most of us here in the Hackaday bunker do not) this hack is still worth your time. Mold making is one of the uber-useful skills you should have in your hacker toolkit and [ShitnamiTidalWave] has done both an excellent job of building a mold, and of explaining the process.

Raw material for this one couldn’t be easier; each mold is made out of plywood, 2×4 stud, and nails, along with handles made of 3/4″ PVC pipe. The studs were ripped down and used to create the 45 degree chamfers at each edge. Mold-making veterans will tell you that release agent is a must and in this case rubbing the insides of the molds with wax made it a snap to pry the wooden forms off of the set concrete.

Concrete has a tendency to crack as it cures so if you’re casting large pieces like this touch-sensitive concrete countertop you might want to throw in some fiber reinforcement to the mix. If you’re keen on seeing some of the more impressive mold-making skills at work, check out how metal parts are cast from 3D-printed molds and how a master duplicates parts using silicone molds.

Being a top athlete in this modern age is a full-time job. No longer do athletes simply practice at their nominated sport of choice. They undergo strength training, full nutritional programs, cardio, and even reflex training.

Reflex training involves a series of nodes that an athlete must identify when lit up, and touch them to switch them off. By triggering them in a fast sequence, the athlete must work hard to both identify the lit node and then move to switch it off. TrainerLights is just such a system, built around the NodeMCU platform.

The system consists of a minimum of four lights – one acting as a server, the others as nodes. The lights each contain a nodeMCU board which communicates over WiFi, while the server has an additional board – acting as a WiFi hotspot that controls the system.

With the lights switched on, the coach connects to the server with a smartphone, and configures the lighting sequence and timings depending on the desired excercise regime. The server then communicates with the lighting nodes, which light their LEDs  at specified intervals. The athlete must clear the lights by swiping at the nodes, which detect the athlete’s hand via an ultrasonic proximity sensor. The sensitivity is configurable, to allow the system to trigger from a distant wave or a direct touch from the athlete. This allows a variety of training uses, from tennis to taekwondo.

With a 3D printed case and parts readily available from any good maker supplier, it’s a project you could tackle in a weekend to add to your own training regime.

We see plenty of athletic hacks in these parts – like this line-following robot for training sprinters. Video after the break.

END_OF_DOCUMENT_TOKEN_TO_BE_REPLACED

People who exercise with fitness trackers have a digital record of their workouts. They do it for a wide range of reasons, from gathering serious medical data to simply satisfying curiosity. When fitness data includes GPS coordinates, it raises personal privacy concerns. But even with individual data removed, such data was still informative enough to spill the beans on secretive facilities around the world.

Strava is a fitness tracking service that gathers data from several different brands of fitness tracker — think Fitbit. It gives athletes a social media experience built around their fitness data: track progress against personal goals and challenge friends to keep each other fit. As expected of companies with personal data, their privacy policy promised to keep personal data secret. In the same privacy policy, they also reserved the right to use the data shared by users in an “aggregated and de-identified” form, a common practice for social media companies. One such use was to plot the GPS data of all their users in a global heatmap. These visualizations use over 6 trillion data points and can be compiled into a fascinating gallery, but there’s a downside.

This past weekend, [Nathan Ruser] announced on Twitter that Strava’s heatmap also managed to highlight exercise activity by military/intelligence personnel around the world, including some suspected but unannounced facilities. More worryingly, some of the mapped paths imply patrol and supply routes, knowledge security officers would prefer not to be shared with the entire world.

This is an extraordinary blunder which very succinctly illustrates a folly of Internet of Things. Strava’s anonymized data sharing obsfucated individuals, but didn’t manage to do the same for groups of individuals… like the fitness-minded active duty military personnel whose workout habits are clearly defined on these heat maps. The biggest contributor (besides wearing a tracking device in general) to this situation is that the data sharing is enabled by default and must be opted-out:

“You can opt-out of contributing your anonymized public activity data to Strava Metro and the Heatmap by unchecking the box in this section.” —Strava Blog, July 2017

We’ve seen individual fitness trackers hacked and we’ve seen people tracked through controlled domains before, but the global scope of [Nathan]’s discovery puts it in an entirely different class.

END_OF_DOCUMENT_TOKEN_TO_BE_REPLACED

It’s been said that the best way to tackle the issue of childhood obesity would be to hook those children’s video game consoles up to a pedal-powered generator. Of course, this was said by [Alex], the creator of Cykill. Cykill interfaces an Xbox to an exercise bike, so to keep the video game going you’ll have to keep pedaling the bike.

While there is no generator involved in this project, it does mimic the effect of powering electronics from a one. The exercise bike has a set of communications wires, which are connected to a relay on the Xbox’s power plug. When the relay notices that the bike isn’t being pedaled enough, it automatically cuts power to the console. Of course, the risk of corrupting a hard drive is high with this method, but that only serves to increase the motivation to continue pedaling.

The project goes even further in order to eliminate temptation to bypass the bike. [Alex] super-glued the plug of the Xbox to the relay, making it extremely difficult to get around the exercise requirement. If you’re after usable energy instead of a daily workout, though, there are bikes out there that can power just about any piece of machinery you can imagine.