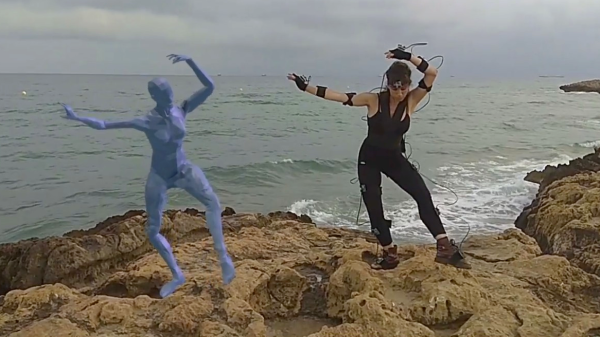 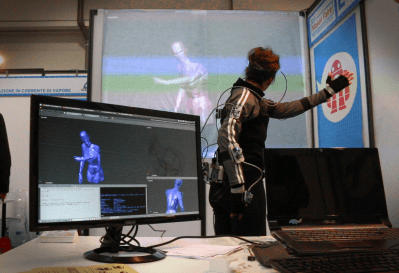 END_OF_DOCUMENT_TOKEN_TO_BE_REPLACED

[Alvaro Ferrán Cifuentes] has built the coolest motion capture suit that we’ve seen outside of Hollywood. It’s based on tying a bunch of inertial measurement units (IMUs) to his body, sending the data to a computer, and doing some reasonably serious math. It’s nothing short of amazing, and entirely doable on a DIY budget. Check out the video below the break, and be amazed.

Cellphones all use IMUs to provide such useful functions as tap detection and screen rotation information. This means that they’ve become cheap. The ability to measure nine degrees of freedom on a tiny chip, for chicken scratch, pretty much made this development inevitable, as we suggested back in 2013 after seeing a one-armed proof-of-concept.

But [Alvaro] has gone above and beyond. Everything is open source and documented on his GitHun. An Arduino reads the sensor boards (over multiplexed I2C lines) that are strapped to his limbs, and send the data over Bluetooth to his computer. There, a Python script takes over and passes the data off to Blender which renders a 3D model to match, in real time.

All of this means that you could replicate this incredible project at home right now, on the cheap. We have no idea where this is heading, but it’s going to be cool.

END_OF_DOCUMENT_TOKEN_TO_BE_REPLACED 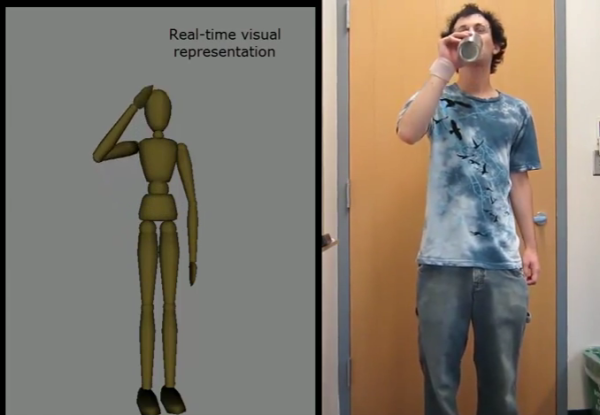 This guy takes a drink and so does the virtual wooden mannequin. Well, its arm takes a drink because that’s all the researchers implemented during this summer project. But the demo really makes us think that suits full of IMU boards are the next generation of motion capture. Not because this is the first time we’ve seen it (the idea has been floating around for a couple of years) but because the sensor chips have gained incredible precision while dropping to bargain basement prices. We can pretty much thank the smartphone industry for that, right?

Check out the test subject’s wrist. That’s an elastic bandage which holds the board in place. There’s another one on this upper arm that is obscured by his shirt sleeve. The two of these are enough to provide accurate position feedback in order to make the virtual model move. In this case the sensor data is streamed to a computer over Bluetooth where a Processing script maps it to the virtual model. But we’ve seen similar 9-axis sensors in projects like this BeagleBone sensor cape. It makes us think it would be easy to have an embedded system like that on the back of a suit which collects data from sensor boards all over the test subject’s body.

Oh who are we kidding? [James Cameron’s] probably already been using this for years.